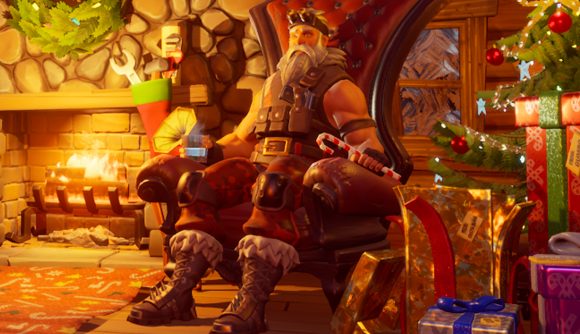 Earlier this week, there was an expected Fortnite server outage that knocked the popular battle royale offline for an extended period. The good news is that developer Epic wants to reward players and “make up for lost time” – oh, and sort out that pesky rogue holiday present.

Earlier this week, on December 29, Fortnite went down unexpectedly for multiple hours due to unspecified “stability issues”, and many fans weren’t impressed given how time-dependent a lot of the holiday challenges are. However, Epic is planning some sort of reward next week for these issues to help players “make up for lost time”. The developer didn’t specify what it would do, but an XP gift seems reasonable.

Speaking of gifts and rewards, the other weird little problem facing Fortnite players right now is in the Winter Lodge. As part of the Winterfest celebration, players can visit the Lodge from Fortnite’s main menu and grab a variety of presents, from emoticons to skins – but at the moment it’s a little broken.

As of right now, the game reports that players have one more present still to open – but there isn’t one to be found, just a bunch of empty boxes. Well, Epic also says that it’s “working on that” little problem, so hopefully players will be getting that rogue holiday present sometime soon.

Already opened all your presents but still see one extra present left to open? Sit tight, we're working on that. 🎁

Much like 2021, Winterfest is nearly over so make sure to grab all the presents and rewards while you still can. Or Boba Fett, he’s good too.