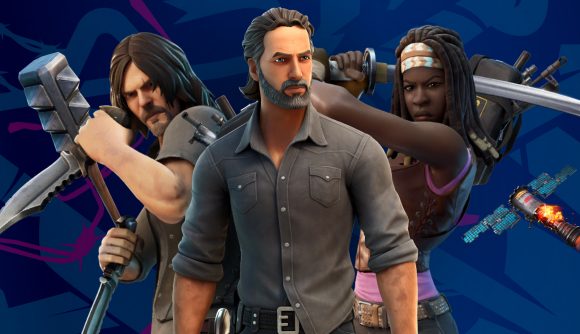 The Fortnitemares Halloween event is in full swing over in Epic’s battle royale phenomenon – and it’s just added a new character to the Fortnite The Walking Dead crossover in the form of bearded Sheriff Rick Grimes, along with the return of Daryl and Michonne.

Fortnite is getting well-known for its crazy crossovers, like how Marvel’s Carnage is the ultimate reward of the Season 8 battle pass – but in this case, it’s revisiting a tie-in from last year with a brand new character. The Walking Dead’s Daryl Dixon and Michonne appeared in the game last December, but at the time it seemed a little odd that the crossover would leave out the show’s central character Rick Grimes.

Epic finally seems to have noticed that, as it’s brought back its The Walking Dead crossover with Rick finally playable as of today. Rick Grimes costs 1500 V-Bucks on his own, with an alternate jacketed skin, or the bundle with all his gear – walker club, backpack, and crashing satellite glider (!) – is currently on sale for 1900, with a usual price of 2800.

Daryl and Michonne’s packs are also back, either separately for 1800 V-Bucks – which includes an alternate outfit and a special melee weapon for each – or as a bundle with both that’s currently on sale for 2500. Sadly, there is no bundle for the entire The Walking Dead crossover right now.

He’s shown us what it takes to go through all walks of life.. and afterlife.

The Walking Dead as a franchise can go either way in games – for every genre-defining adventure there’s a terrible multiplayer game. Fortnite seems a pretty safe bet at least.