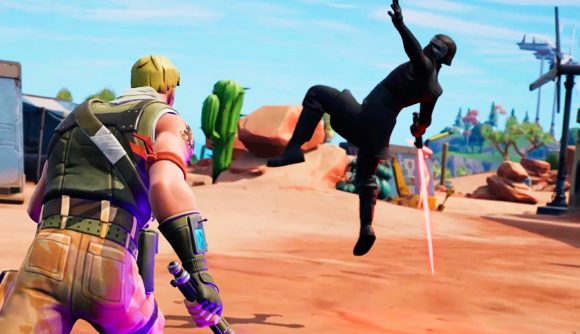 May 4 is Star Wars Day, officially – although after the run of Star Wars films and TV series we’ve seen over the past few years, it’s rarely seemed like it’s not Star Wars Day. At any rate, May 4 is special – mainly for pun-related reasons – and Fortnite is getting in on the celebrations by offering a bunch of Star Wars themed goodies.

The battle royale game has already kicked things off, in fact: now through May 17, Fortnite players can volunteer for ‘Stormtrooper training’ by taking on a series of Star Wars quests. If you complete five of them, you’ll earn yourself an Empire banner to display in-game.

On both the battle royale and zero-build maps, you’ll also be able to pick up iconic Star Wars weapons. The E-11 blaster rifle can be acquired by exchanging bars or by looting chests around the island. You’ll also be able to find lightsabers – the models originally carried by Luke Skywalker, Kylo Ren, Obi-Wan Kenobi, and Mace Windu – by exploring and searching the maps.

In case you need a refresher, here’s how lightsabers work:

Returning to Fortnite from a galaxy far, far away…

Lightsabers are back! Hop in now to use the Lightsaber item, complete limited time quests, and more!

Almost every Star Wars outfit that’s been featured in Fortnite will be returning to the shop for the two-week celebration – the one exception being the Mandalorian, which was a battle pass reward.

There’s a fair amount of Star Wars content to find in Fortnite already, but some hints have trickled up that suggest there may be even more to come.