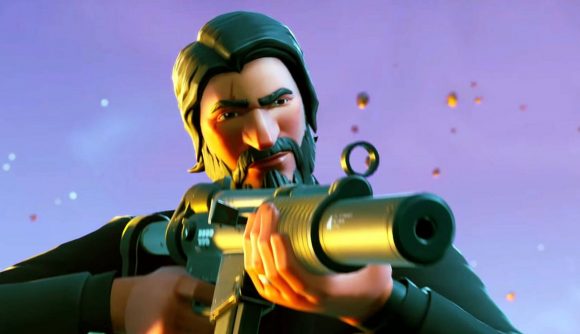 When Fortnite streamer Koooooomar saw on Twitter that the Wick’s Bounty limited time mode was back for the 14 Days of Summer Friday, he decided to fire up his stream. He was going to help as many people as possible earn the John Wick’s Umbrella item.

The 33-year-old electrical engineer hopped into Fortnite and onto Twitch, which is where he stayed for the next 16 hours straight. Viewers could type a command into his chat to let him know if they wanted help earning the umbrella, and he spent the whole day pulling squads together and grinding umbrellas.

To earn the John Wick Umbrella, you have to be the last squad standing in the Wick’s Bounty LTM, which isn’t easy to do if you’re, say, a kid running up against a bunch of “sweaty” older players eager to either earn the reward themselves, or just prevent other players from getting it.

So Koooooomar wound up helping out quite a few younger Fortnite players that day, and it wound up paying off with a particularly heartwarming victory.

Here’s what happened, courtesy of the Fortnite Battle Royale subreddit, which isolated the clip:

Streamer spends 15 hours helping people get their Wick umbrellas and gets a wholesome win for a young girl in the process. from r/FortNiteBR

It’s a build-off to the finish, and Koooooomar winds up getting the drop on the opposing squad, finishing off the last two players on the other team. “Victory Royale” begins to materialise on the screen, and there’s a brief moment in which nobody reacts.

Then, the screams of joy. It’s Koooooomar on the main mic, of course, but then you hear the voices of two ecstatic kids.

Read more: Here are the Fortnite 14 Days of Summer challenges

Koooooomar was clearly thrilled too.

“Oh my God, I’m sorry to everybody else, but this is my favorite win,” he said.

The Wick’s Bounty LTM is over, but one streamer managed to make the most of the short time is was available by making sure other players were having a blast.