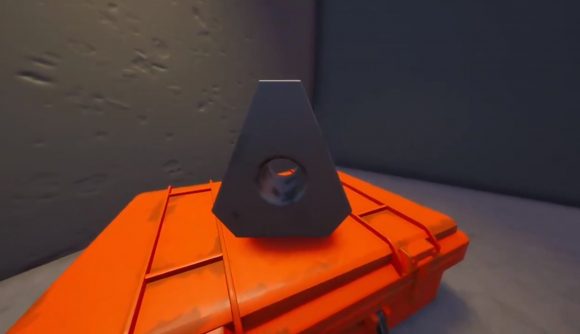 Fortnite may be playing host to yet another crossover event featuring Christopher Nolan’s upcoming film Tenet. Players have discovered a distinctive object linked to Tenet in the basement of Steamy Stacks, and it likely hints at another planned cross-promotional event in advance of the movie’s premiere August 26.

The object in question is a peculiar looking orange carrying case with a triangular carving sitting on top of it. You can find it in unit four of Steamy Stacks if you dig into the basement through the floor at the bottom of the stairs, as GamesRadar reports. If you break the wall on the far side of the room, you may hear some faint music – it’s from the soundtrack featured in the latest Tenet trailer, which itself debuted in Fortnite back in May.

You’ll find the objects inside that room, but from here on out, you’re on your own. The internet hivemind is busy working out what it means as we speak, and so far there’s no consensus on what the grey carving is or what it signifies. Chances are pretty good that it’s related to time reversal somehow, which is the gimmick at the heart of Tenet.

Here’s a clip of someone breaking into the room and finding the case:

A #Tenet easter egg has made its way onto Fortnite, suggesting more promo for ‘Tenet’ on Fortnite is coming. pic.twitter.com/l7bvPCD3Wb

While nobody’s sure exactly what this means, what’s clear is that the promotional deal between Epic’s battle royale game and Tenet has not yet reached its final form. There are only a few weeks left before the movie is scheduled to come out though, so we’ll probably find out before long.