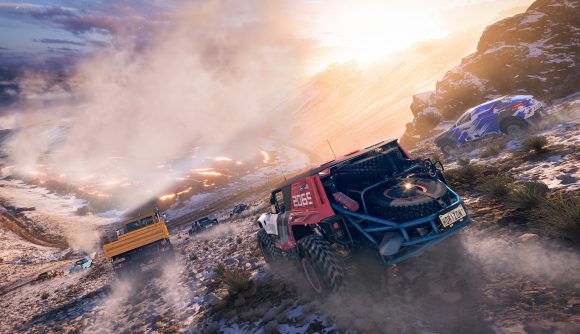 There’s a new patch out today for racing-themed open-world game Forza Horizon 5, and among the many fixes it’s bringing with it are some welcome adjustments to Horizon Arcade’s scoring system. From now on, your score target will scale based on the number of players participating in the session, which will make certain seasonal challenges much easier to complete – especially if you’re playing solo.

There are other fixes for Horizon Arcade, as well. The patch addresses a problem that led to members of the same convoy seeing different points totals on their screens, and it prioritises getting players into larger groups at the start of each event. You’ll also have more time to get to an event: the patch increases the time you’ll see an event circle on your map to ten minutes.

Multiplayer isn’t the only area that’s getting turtle waxed in this patch. It also includes a few of the standard stability improvements and crash fixes, as well as a fix for incorrect button prompts when using a Logitech G920 steering wheel controller.

Looking at PC-specific fixes, Playground Games has fixed a bug that caused the low video memory warning to pop up on AMD Renoir, and an issue that led to graphical artefacts showing up while using 3440×1440 resolution.

You can read the full patch notes over on Forza Motorsport’s official support site.