You may recall that in December, KK Game Studio rolled out Steam Workshop support for Freeman: Guerrilla Warfare, its Mount & Blade-style shooter. The studio has now published its second official mod, and it’s the big anime girl mod it teased back when it announced mod support.

This mod, simply called AnimeMod, goes far beyond the basic model-swap you might have expected. AnimeMod introduces all new soldiers (now they are all anime girls), new factions, new interface, new items, and even all new music. The game looks completely different, with a powder pink and blue cast and a bright, pastel, cell-shaded look to the battlefields.

Rather than fighting off a bunch of mercenary dudes in balaclavas, now you’ll have to build a band of fighters to take on the Akuto Sisterhood, fighting among falling cherry blossoms and outside walled city fortresses.

There’s even a revamped character creator, which lets you customise hairstyle and hair color, eye shape and color, and choose between several makeup looks. The studio has added a bunch of detailed outfits, too, making this a pretty generous free bonus from the studio that created the game.

Here’s a little video introduction to the mod: 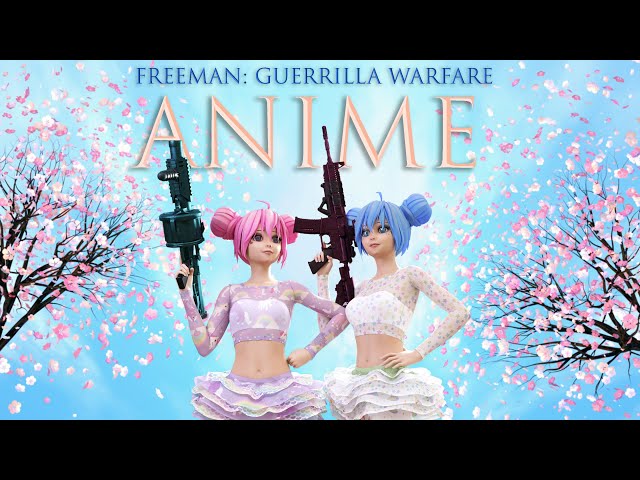 Bear in mind that while AnimeMod is a complete overhaul of Freeman: Guerrilla Warfare, your job is still to mow down all your enemies and take over the country. That much, at least, has remained untouched.

To download AnimeMod, you can head over to the Steam Workshop page and just click ‘subscribe’ – Steam will handle the installation automatically. Alternatively, you can install it manually by downloading it from either ModDB or Nexus Mods.