Did you know that Sweden had the fourth largest air force during the Cold War? I didn’t until Generation Zero game director Emil Kraftling told me in our interview. For a neutral nation that bent over backwards to avoid getting dragged into the hellish conflicts of the 20th century, this fact is startling. It was driven by an anxiety borne from so-called Russian fear and perceived threats from other major nations, which triggered the construction of 65,000 military bunkers across the Scandinavian land.

Generation Zero might be set in this fraught period of Swedish history, but it’s a backdrop that has become more relevant than ever in recent years. Following rumblings from the East – such as the Russian annexation of Crimea in 2014 – the Swedish government rapidly increased defence spending and even reintroduced conscription. Suddenly, those hidden subterranean bases, thought to be relics relegated to a more unsettled past, are reassuming their old significance. The bad old days appear to be coming back.

This brings the robotic spectre looming over the mysterious open world in Avalanche Studios’ co-op adventure even closer to home. The post-apocalyptic nightmare that sees you and your multiplayer band head into 1980s Sweden to endure an invasion of machines is a leap into an alternative history, but one rooted in very real Cold War paranoia. As such, Generation Zero should feel urgent and frightening. Instead, it’s a game that fails to do justice to its engrossing historical backdrop.

Back to the Future

The world of Generation Zero is chillingly sterile. I was by no means expecting the explosive romp of Just Cause or Mad Max, but this is quiet even for a game about the end of the world. The blusterous winds and unrelenting rain threaten to overwhelm the mysterious tones of the ‘80s synth that accompany your first nervous steps. The soundscape is calling out to be filled by the heavy hydraulics of the metal monsters that hunt you. 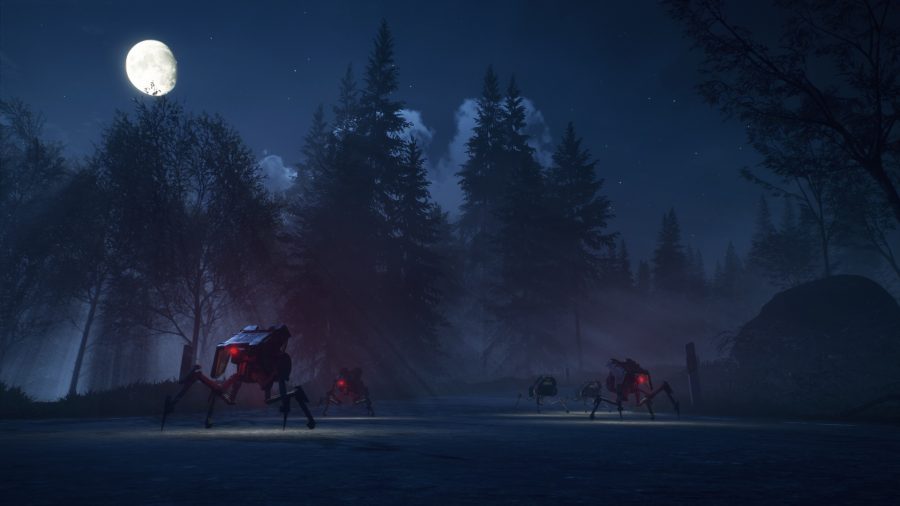 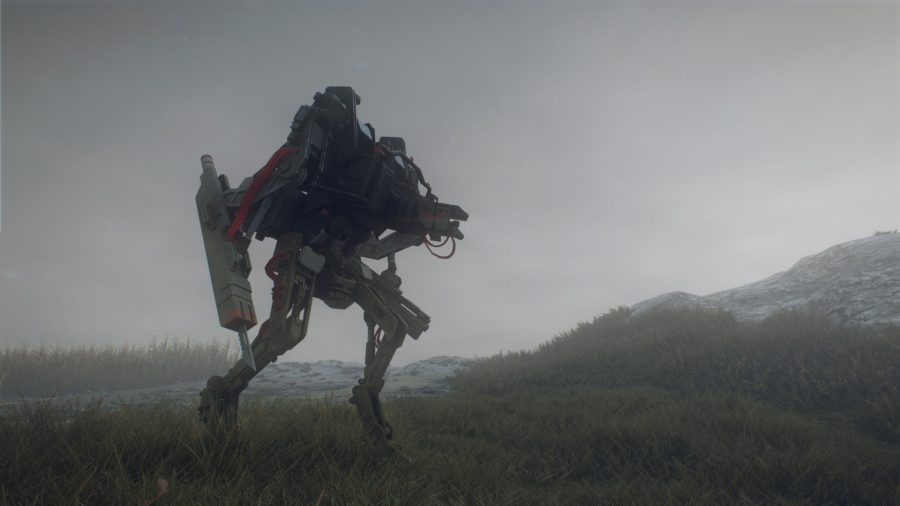 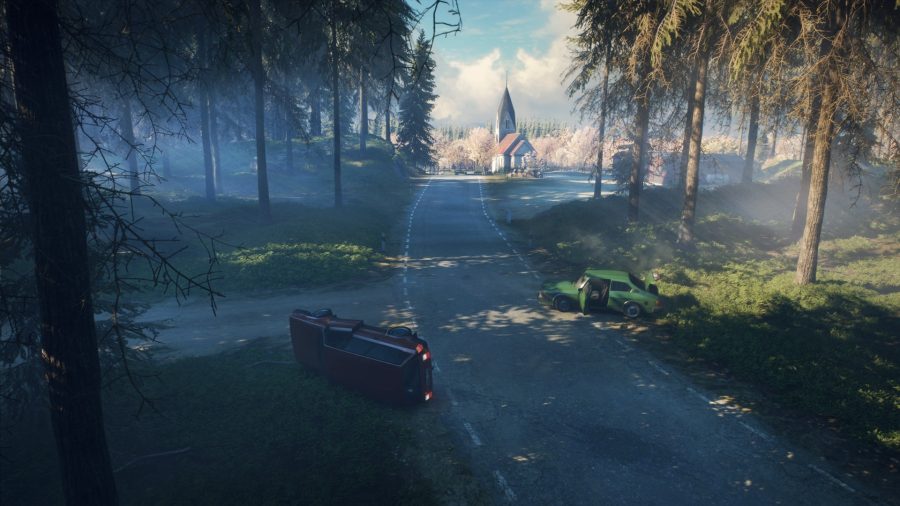 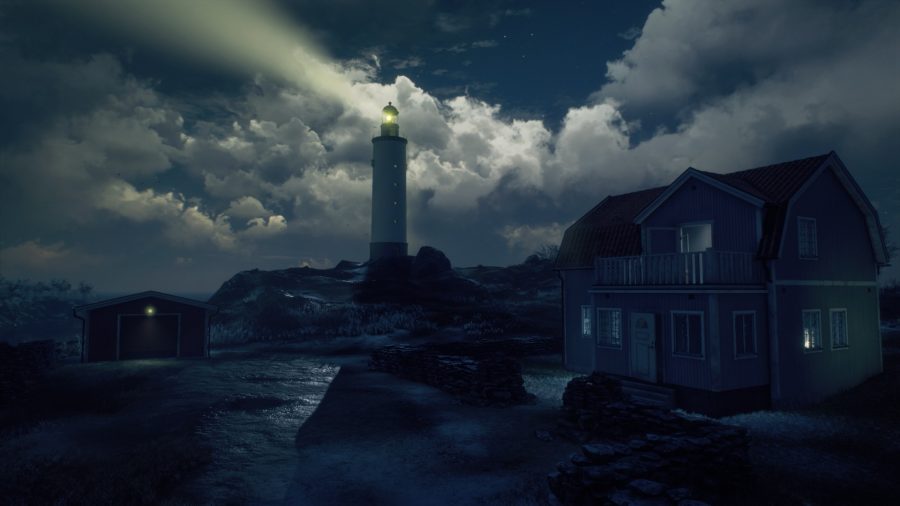 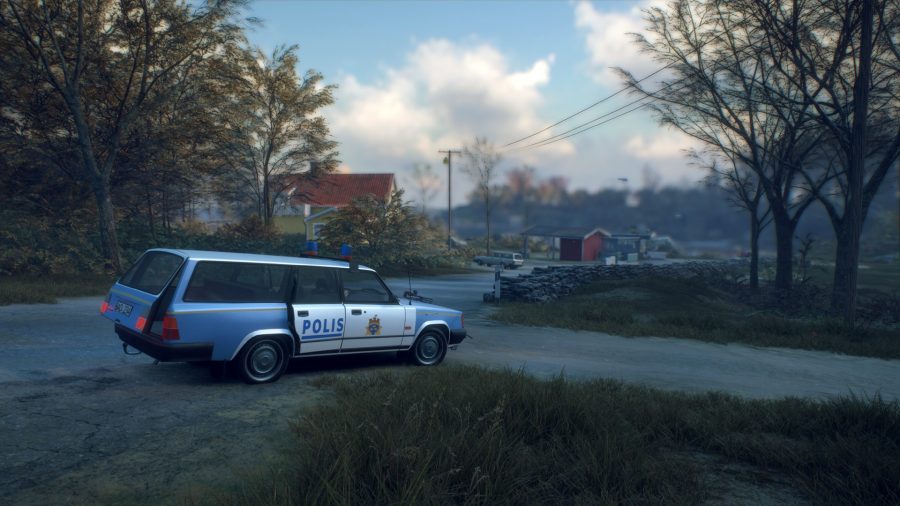 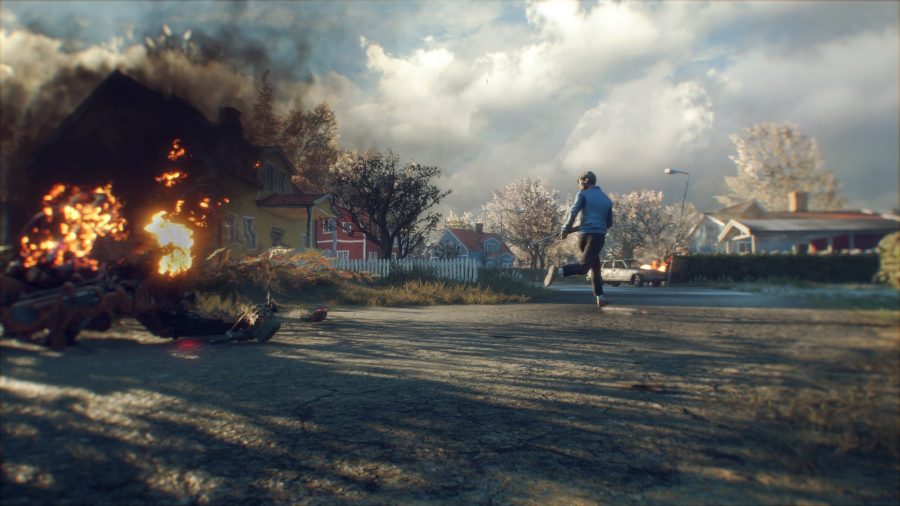 The regions I visit feel largely similar, with buildings made of repeated designs, contributing to what is a bland environment overall. However, collectable Dala horses and dynamic subtitles for Swedish writing on the walls are pleasing touches. But these are quickly smothered by the insistence of the checklist that appears for each area, constantly reminding me how many loot opportunities I’ve yet to discover. Missions take on this structure, too: I frequently need to kill a certain number of machines to access new places. All of this goes toward undermining the drifter’s approach to exploring Generation Zero’s world – wandering without aim just to see where it goes – despite the XP rewards that adopting such a playstyle can dish out.

Tales from the oops

Since Generation Zero was revealed in June 2018, its development has been dogged by accusations that Avalanche has borrowed a little too liberally from Simon Stahlenhag’s pen-and-paper RPG, Tales from the Loop. For the duration of the row, Avalanche has rejected that the tabletop board game inspired their game.

The game is also rife with numerous bugs and design issues, which is especially troubling since I’m playing the game a little more than a month away from release. Key mission events fail to trigger and mission explanations are not just unclear, but sometimes even misleading. Generation Zero’s show-don’t-tell clues left by Sweden’s erstwhile residents recall the strides made to eschew map markers in Assassin’s Creed Odyssey. However, they become a problem when they’re so unhelpfully vague. It’s a shame when the momentum that does pick up is disrupted by bugs and mistakes as you attempt to piece together what happened in this world.

This ungainliness extends to the UI, which appears to have barely been improved since we voiced our reservations about it during the Generation Zero beta. The inventory remains unintuitive and it can be tough to discern what ammo and attachments correspond to each weapon. It’s hard enough to martial your gear effectively; it’s a nightmare to attempt it when you’re surrounded by machines. 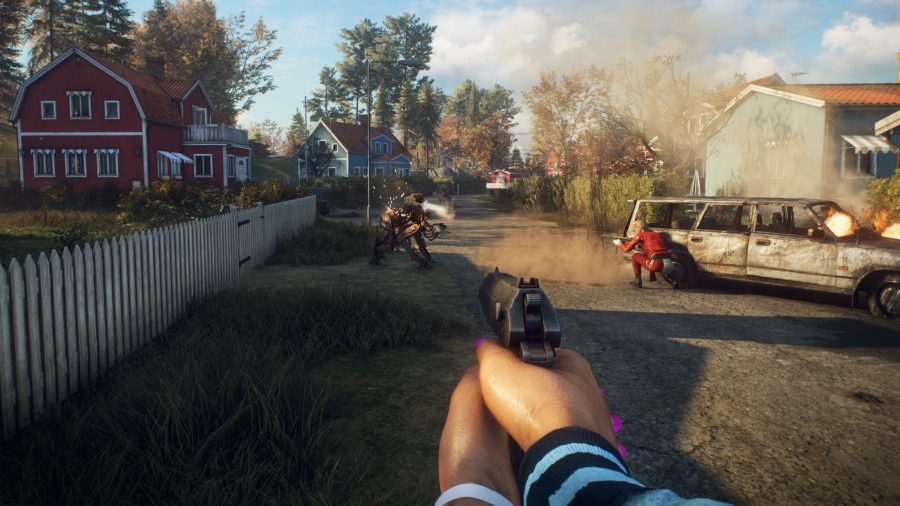 This slice of Sweden is chunky but, given that this not a game with a triple-A budget, the map could have benefited from being smaller. I experience the same wearisome travelling across Generation Zero’s landscape as I do traipsing across the empty green fields of PUBG’s Erangel map in first-person view. That said, Bluehole’s battle royale game showed that weaker visuals don’t necessarily impinge on solid gameplay. Thankfully, Generation Zero’s co-op combat is where its strengths lie.

Generation Zero’s six machine types steal the show. In an understated reimagining of Shadow of Mordor’s Nemesis system, each robot persistently bears the scars of previous scraps. They ravenously scavenge in a lifelike way as they further their domination of this barren land, even when you’re not around. There’s an inescapable feeling that this is a world long lost to humanity, and my fragile group of fleshy soldiers bears a resounding irrelevance in the face of the all-consuming metal might.

The most common bots early on are the Runners – hound-like metal monsters with piercing red lasers for eyes. There are also the scouting Deceivers which don’t attack but alert their hardier mates to my position. To deal with both I have to focus my aim to dismantle the robot – taking off body parts like in Horizon Zero Dawn in a subtler but not as clear way – and then target weak spots to finish them. But when it comes to taking out the colossal Tank, cooperative play is essential – though solo attempts aren’t out of the question. 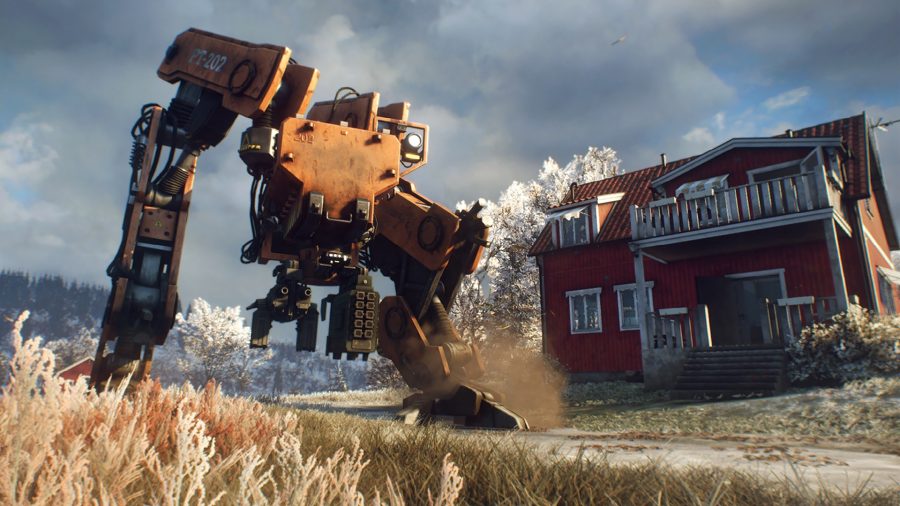 These lumbering giants always look to drag enemies out into the open, away from cover, before blasting them away. Due to this they demand inventive team strategies to incapacitate and Generation Zero provides enough tools to allow for this. An especially handy tactic is luring the big beast away from my team with a smartly placed boombox – the game’s set in the ‘80s, did you get that? – while someone else places a fuel tank next to it. Another of my team armed with a long-range rifle can then bring the high-octane pain from a safe distance. It’s clear that plans coming together like this make up Generation Zero’s finest moments.

It’s a good job that these instances are easily accessible then, as joining and playing in a co-op session is seamless. And, happily, any progress made in Generation Zero as a co-op team unlocks for everyone in that group – unless you complete a mission much further on in the story than you’ve got by yourself. That means not only do most missions stay complete, any time spent bolstering your inventory and looting locations carries over.

The love and nostalgia the Generation Zero team has the for the setting is unmistakable, but the decision to tell this story in the form of a multiplayer game is perhaps misguided. Much like Fallout 76, the most engaging story threads have long been tied up before you arrive. It doesn’t help that it’s hard to concentrate on the nuggets of narrative that do exist in letters and cassette tapes when your team is keen to get to the next objective. 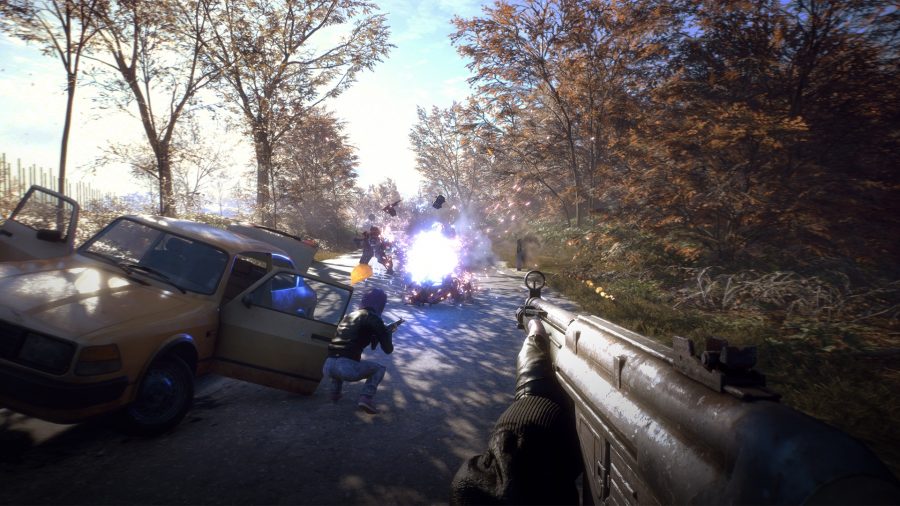 The game also suffers from tonal incoherence: the escalating dread of your journey seems in direct conflict with the eccentric customisation options and emotes. You could try to keep a machine entertained to prevent them from killing you by doing the dance from The Breakfast Club in front of them, but they’re not exactly known for their sense of humour.

What else is on the way? Here are the best upcoming PC games

These problems ultimately get in the way of the sense of mystery set up by a world steeped in historical intrigue. Plenty of the issues we highlighted in the beta remain in this pre-launch build, and seem likely to crop up again by the time of the Generation Zero release date, but we were informed that a team at Avalanche is focused solely on post-launch updates. There’s a sound cooperative centre to Generation Zero, it’s just a shame that you have to blast through a drab metal exoskeleton to get there.