The Genshin Impact Traveler – Aether or Lumine – is able to switch between Anemo and Geo talents and constellations at will, by interacting with a Statue of the Seven in Mondstadt or Liyue, respectively. When they resonate with one of these statues, their element becomes aligned with the element of the statue’s corresponding region.

The Genshin Impact 2.0 update transported us across the sea to Inazuma, a new region inspired by Japan. Inazuma means lightning in Japanese, so it comes as no surprise that the nation worships Baal, the Electro Archon – and that the Statues of the Seven in Inazuma can imbue the Traveler with Electro powers.

How to unlock Electro Traveler 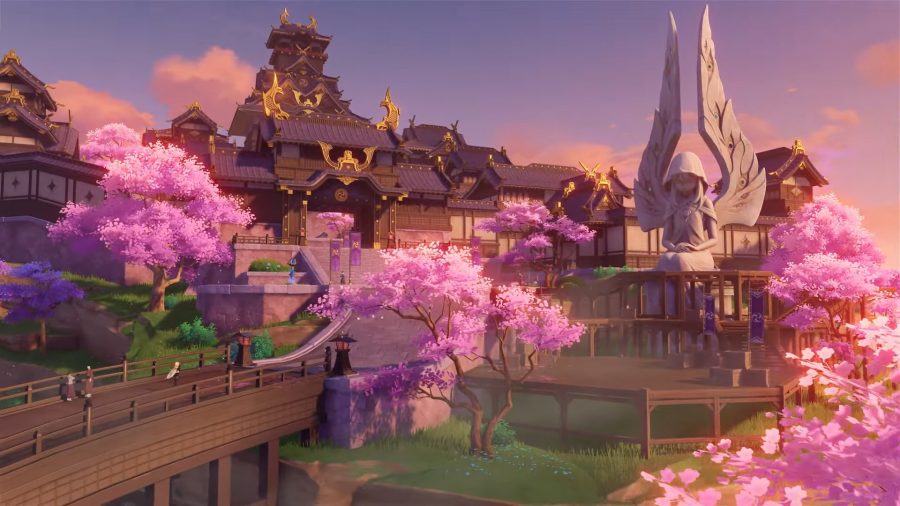 The Electro Traveler is well suited to becoming a support or sub DPS. Their elemental skill is Lightning Blade, an attack that generates Abundance Amulets which restore elemental energy and increase the elemental recharge of whoever picks them up. They generate plenty of particles, making Electro Traveler an excellent energy battery. The passive talent Thunderflash reduces the cooldown of Lightning Blade whenever Abundance Amulets are picked up by the Traveler’s teammates.

As for weapons, The Lion’s Roar sword increases damage against opponents affected by Pyro or Electro by 20%. Festering Desire is also an excellent choice, as it increases elemental skill damage by 16% and elemental skill crit rate by 6%, and has an energy recharge % as its secondary stat. There are a few excellent choices for artifacts; the Thundering Fury four-piece boosts your Electro damage substantially, and Noblesse Oblige buffs elemental burst damage, too. The Seal of Insulation artifact set is also well suited as it increases elemental burst damage and gives you extra energy recharge.

You call upon the protection of lightning, knocking nearby opponents back and dealing electro damage to them.

That’s everything we know about the Electro Traveler – if you’re eager for more information on the newest region, check out our Inazuma guide, and find out more about the new Genshin Impact characters who will appear on the next Genshin Impact banner.