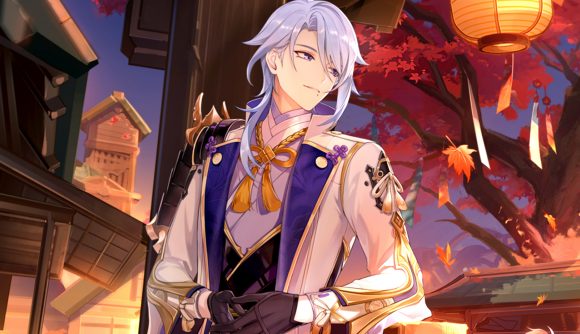 There’s a new Genshin Impact event this week that will allow you to add Xingqiu to your roster. Hues of the Violet Garden was announced as part of the 2.6 update, though we now have a better idea of what the anime game‘s latest shebang will entail.

All the details on the RPG game event are revealed now, thanks to Mihoyo. Hues of the Violet Garden starts tomorrow and will last just under three weeks. Players have to be Adventure Rank 30 to play the event, as well as completing a few story quests such as “Ritou Escape Plan”.

The goal of the event is for players to help organise the Irodori Festival in Inazuma, with the recently released Ayato seemingly playing a big part. The tower defense game-style Theater Mechanicus is back as the more streamlined ‘Stage of Brilliance’. ‘Clash of the Lone Blades’ centres on one-on-one duels, and if all that is too stressful, ‘The Floral Courtyard’ is a quest all about flower arranging. As for Xingqiu, complete all the criteria for the ‘Friendship in Writing’ quest and you can invite the 4-star character to your party.

The new event "Hues of the Violet Garden" is about to begin!

PCGamesN’s extensive guide has all the further gameplay details of the Hues of the Violet Garden event.