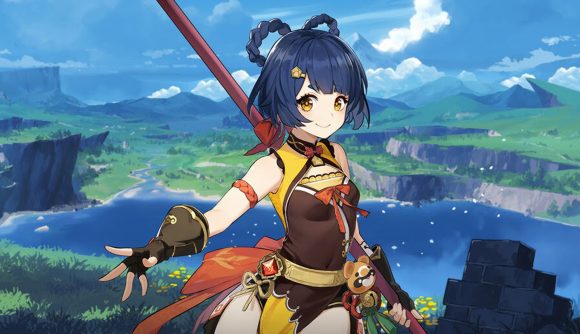 One of Genshin Impact’s latest events has what may be an unintended side-benefit for players taking on some of the tougher combat challenges in the RPG game – while the Hypostatic Symphony event is live, players can top off their characters’ HP and fill their Elemental Burst gauges to max whenever they want to.

Hypostatic Symphony began January 16, and it challenges players to take on increasingly Pure Hypostasis bosses in battle. To access the challenge, you need to increase your Adventure Rank 20. From that point on, you can teleport to the challenges simply by selecting it in the pause menu.

This is where the convenient health exploit comes into play. When you select a boss to fight, you’ll find that your party’s health has been restored – and downed characters are all revived at full health. What’s more, they’ll all have a maxed-out Elemental Burst gauge. That’s super handy, since they’ll need everything they’ve got in order to take on the Hypostatic Symphony bosses that make up the event’s challenges.

However, you don’t actually have to stick around to fight the boss if you don’t want to. As GameRant points out, if you exit the challenge, you’ll keep that full charge of HP and Elemental Burst. That makes the challenge a bit like a Statue of Seven that never runs out of juice.

This has all the hallmarks of a cheat or exploit, but it doesn’t actually involve cheating or exploiting anything – this is just how the challenge is set up to work. Since the Hypostatic Symphony event only runs until January 31, you won’t have access to it forever – you’ll have to decide how you want to use it for yourself over the next week and change.

If you’d rather approach the game more traditionally, have a look at our guides to Genshin Impact elements and the best Genshin Impact artifacts. Those will help put you on the track to success, with or without the occasional HP boost.