Looking for the best Genshin Impact Shenhe build? Shenhe, the disciple of the Cloud Retainer adeptus, is a Cryo Polearm character arriving in the Genshin Impact 2.4 update. She’s descended from a family of exorcists, and has a somewhat cold and distant personality as a result of spending most of her time in the mountains, isolated from society.

Shenhe is a five-star character, but she won’t fit every team – to utilise her full potential, the best Genshin Impact Shenhe build focuses on her support capabilities, enabling her to boost her teammates’ damage using her elemental skill, Spring Spirit Summoning. This skill grants allies Icy Quill stacks, buffing their Cryo damage output based on Shenhe’s current attack. This means she is well suited to providing buffs and generating energy for her teammates.

Therefore, the best Shenhe build increases Shenhe’s attack stat – we’ve got plenty of recommendations for the best artifacts and weapons below, as well as suggested Shenhe teams. However, if you’re considering wishing on Shenhe in the current Genshin Impact banner, bear in mind that some of her ascension materials come from Enkanomiya, a new area in Genshin Impact. If you’re not strong enough to go there yet, it may be a while before you can use Shenhe at full strength. Once you get there, though, here’s everything you need to put together the best Shenhe build.

As mentioned above, the key to the best Shenhe build is maximising the utility of her Icy Quill stacks from her Elemental Skill, Spring Spirit Summoning. The damage buff is based on Shenhe’s current attack, so we recommend choosing artifacts and weapons that increase her attack as much as possible. 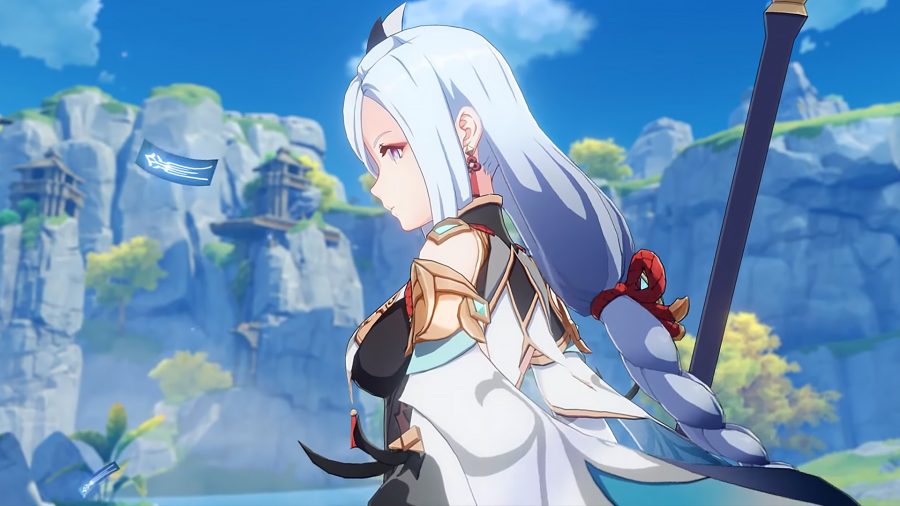 The five-star polearm Calamity Queller is perfect for Shenhe, with an attack stat and a passive ability that causes her attack to increase over time after using an Elemental Skill – the increase is doubled while she’s off the field.

The Favonius Lance is the best four-star weapon for Shenhe. Its stats won’t boost your attack as much as the Calamity Queller, but it generates Elemental Particles for your team, so it’s more useful for a support character than DPS-focused weapons. Alternatively, the Lithic Spear is a great choice if you have several teammates from Liyue.

If you happen to have a Skyward Spine, Vortex Vanquisher, or Primordial Jade Winged Spear gathering dust, they’re all viable choices for Shenhe. For free-to-play weapons, however, your options are less than ideal – The Catch may be your best bet, but it doesn’t synergise too well with her kit.

For artifacts, we recommend the Shimenawa’s Reminiscence two-piece set alongside the Gladiator’s Finale two-piece set, as they both grant an 18% attack bonus. Alternatively, if you’re running a Freeze team – explained below – the Blizzard Strayer four-piece set is a good option to increase damage against frozen opponents. 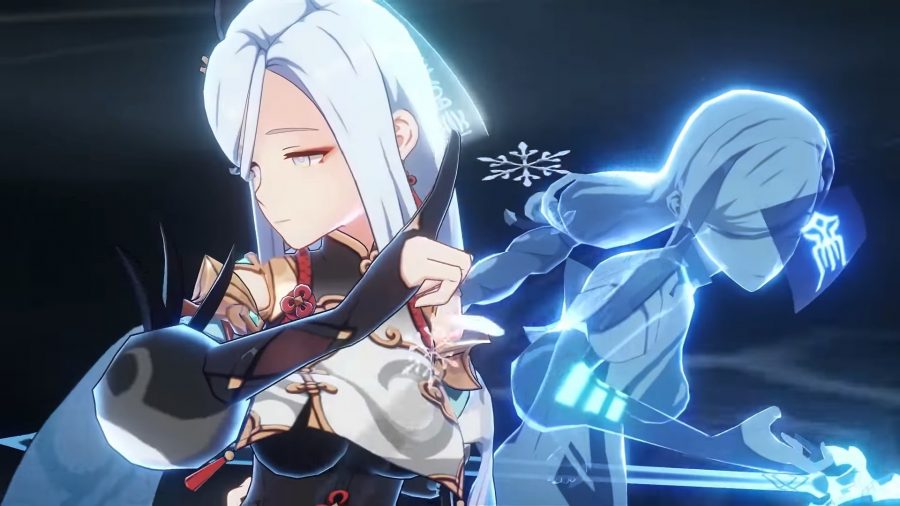 The bonus damage granted from Shenhe’s Icy Quills is added to allies’ base Cryo damage before any damage % based bonuses are calculated, so it will scale significantly when used alongside a powerful Cryo damage character.

As a result, in order to be useful, Shenhe needs at least one Cryo DPS character in her team. Shenhe synergises particularly well with Ayaka – other good Cryo teammates are Diona, Ganyu, Chongyun, Rosaria, or Kaeya. However, avoid pairing her with Eula, as Eula uses physical damage more than Cryo, and won’t benefit from Shenhe’s Icy Quills much.

That’s everything you need to know about the best Genshin Impact Shenhe build. We’ve also got the best Yun Jin build and best Ningguang build in case you picked them up on Shenhe’s banner, too.