Enjoying gaming’s latest ghost game phenomenon, Phasmophobia? We can all agree that ghost games are better played together, right? That way, you can work together with your pals online and if things go south, sacrifice them and run away to safety. However, Phasmophobia isn’t just a ghost game, it’s also a detective game and a survival game, so it begs the question – are there other games like Phasmophobia?

There’s a lot to love in this new entry into horror games, whether that’s the online co-op, the old-school investigative work, or the increasingly angry ghosts who don’t want messing with their haunt. So, we’ve put together a mishmashed list of ghost games and games like Phasmophobia, that have either all or at least a few of Phasmophobia’s key ingredients.

If you enjoy piecing together clues while evading evil spirits, surviving with your team, and straightening your deerstalker as you hunt for clues and deduce hidden messages, then you’ve come to the right place. Here are the best games like Phasmophobia on PC 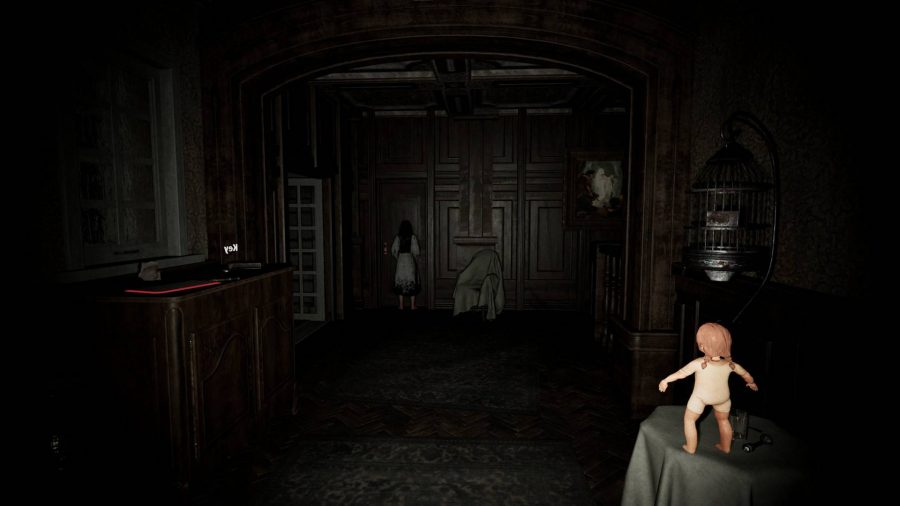 The premise of Pacify is very similar to Phasmophobia. You’re working for the PAH Inc. (Paranormal Activity Helpers) and it’s your job to enter the haunted house and bring back evidence to the company. It’s definitely not as twee as Phasmophobia, doubling down on the jumpscares, and focusing on outright horror rather than paranormal investigation.

You can, however, play online with friends and inspect the house together, either working together or turning on each other to escape alive. You need to collect a series of key items, pacify the ghost, and ultimately cleanse the building of the ghostly presence so you can be on your way. The ghost switches temperaments constantly and reacts to your progress, similar to Phasmophobia’s sanity levels and hunt mode, progressively getting smarter and faster as the game continues. The key difference between the two, however, is that Pacify is a relatively short endeavour that can be completed in a couple of hours, with little reason to revisit it – and that’s fine given it only costs a few bucks. 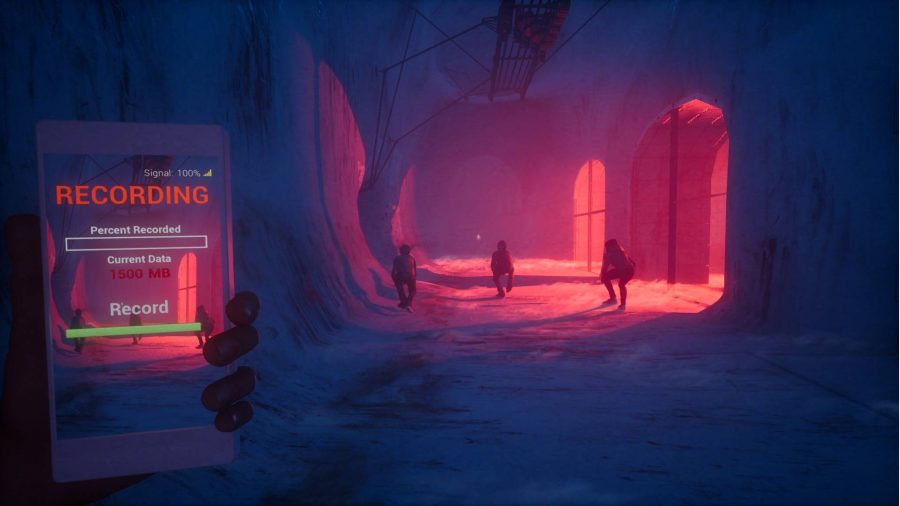 Missions involve tracking down objectives throughout the twilight streets and eldritch complex beneath, and getting out of Dodge before the team is kidnapped by sleepwalking suburbanite soccer moms and a terrifying entity known only as ‘The Shape’. Commit too many ‘sins’ – being seen, trespassing, breaking things – and The Shape will relentlessly hunt the offending player down.

It’s equal parts campy and genuinely terrifying, and inspires some real camaraderie when you need to rescue each other, even when matchmaking with strangers. There’s also some great lore and backstory to the horrors plaguing the town, parcelled out gradually through environmental cues and other secrets. If you’re looking for team-oriented social horror like Phasmophobia then The Blackout Club is your best bet. 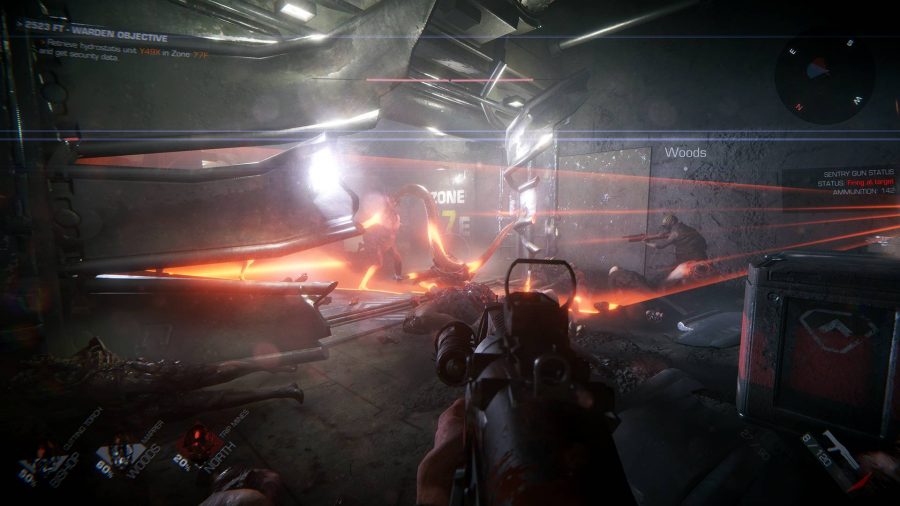 GTFO certainly captures the claustrophobia and tension that Phasmophobia delivers so well, as you and up to three friends explore a terrifying web of compact corridors trying to evade and survive prowling monsters. If this sounds at all like the hordes of xenomorphs that harangue the protagonists of Aliens then that’s because this is almost exactly what GTFO is like – in a good way. You’ll need to be patient and determined when working with your pals to make it out alive.

Better together: Our list of the best co-op games on PC

Unlike in Phasmophobia, you’re not powerless. Instead, you have an array of monster-slaying guns and melee weapons to equip, so no more flailing around in the dark with a crucifix. Communicating efficiently with your team is key to survival as you’re plunged down into the horrifying depths to do your captor’s dirty work, but by completing missions and delivering loot, you get to do it all over again – lucky you.

This is definitely a lot more action-oriented than Phasmophobia, but it’s one of the best co-op horror, first-person shooters since Left 4 Dead 2, so it’s worth checking out. 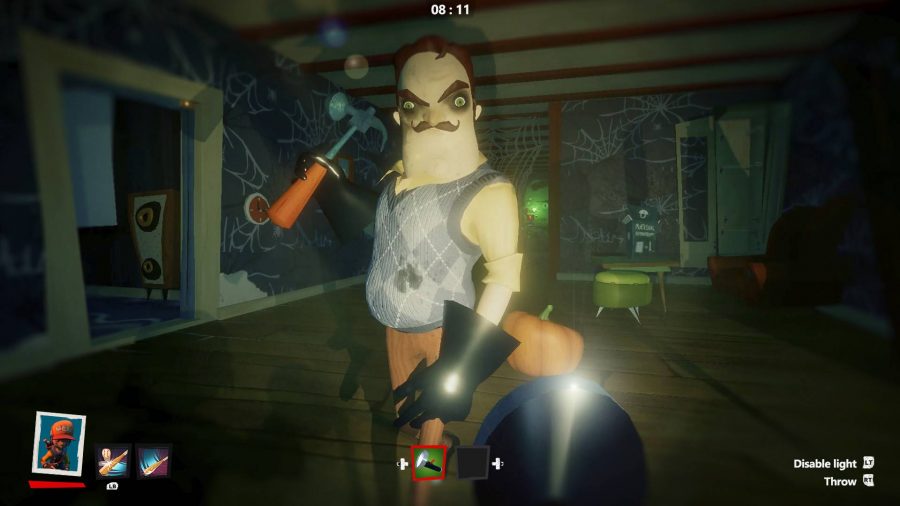 For those that have played the kitschy indie horror, Hello Neighbor, with its frankly terrifying mustachioed villain – you can now team up with friends online to infiltrate Mr Petersons’ house as a group of kids.

Although this game is ghoul-free, it isn’t without its scares and what makes it most like Phasmophobia is the teamwork and investigative skills you undertake. You need to solve puzzles and progress to different areas by finding keys, working towards the locked basement where your friend is being held captive. Each kid has special skills and abilities such as Leadership, who has a blinding ability, and Brave, who is able to escape the neighbor’s grip.

Okay, so you’re not all in this together, as one of the players is working with the neighbor, disguised as a kid with their own special skills and the objective to make sure your ‘teammates’ don’t succeed. But, even without the ghosts, the Halloween-themed house complete with stretched cobwebs and dark corners makes this eerie game of cat and mouse a sufficiently spoopy ride. 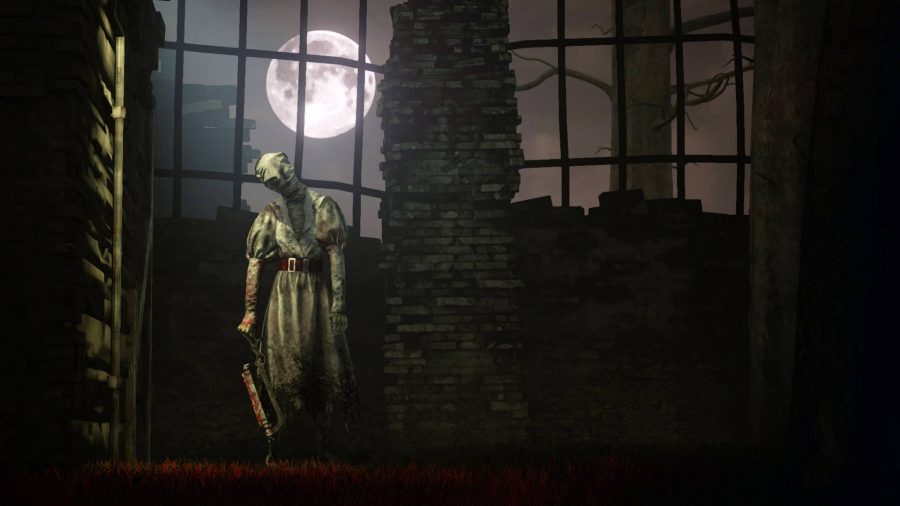 Dead by Daylight isn’t necessarily a ghost game – it really depends on the killers you’re up against. In this asymmetric multiplayer horror game you either take on the role of a killer or one of a group of survivors, the latter working against the clock to get generators up and running before they can exit the map, while the former hunts them down and offers them up to an almighty Entity.

What makes Dead by Daylight so special in the multiplayer horror genre is its expansive roster of 20 playable killers, each one offering a distinct playing style. Every horror trope imaginable is present on the roster of killers, and for ghost games fans there are several malevolent spirits to choose from.

Horror aficionados will no doubt get a kick out of the several official movie tie-ins, allowing you to slay Michael Myers, Freddie Kruger, Leatherface, Ghost Face, and many more. Dead by Daylight has a surprisingly high skill ceiling and a constantly evolving meta, but it’s well worth sticking with. 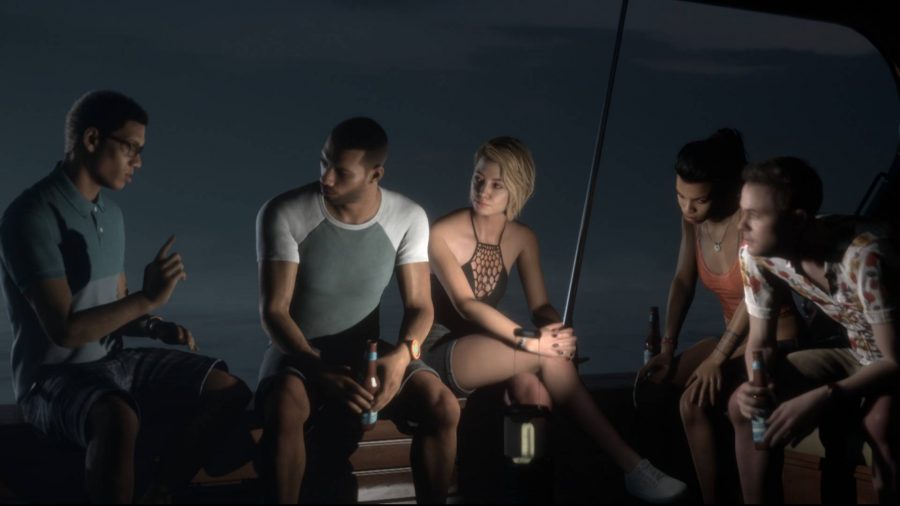 Although Man of Medan is a single-player game, it’s filled to the gills with ghosties and delivers jumpscares and sweat-inducing action sequences that will leave you shivering in a corner. Your aim is to get all five of your characters out alive. Easy, eh? Well, when you’re sailing out to rough seas and you’re stranded on a ghost ship, nothing but the wind howling through the creaky cabin doors and the unknown lurking below, it’s not actually that easy.

Expect to make a lot of poor, anxiety-induced decisions as you stumble around the haunted ship, desperately trying to get action cues right to keep a character alive, not realising that you’re actually steering them towards certain death. All your actions and choices reverberate through Man of Medan’s confined setting, so one seemingly insignificant choice you make early on might come back to bite you hours later, exposing your deepest darkest fears in the process. 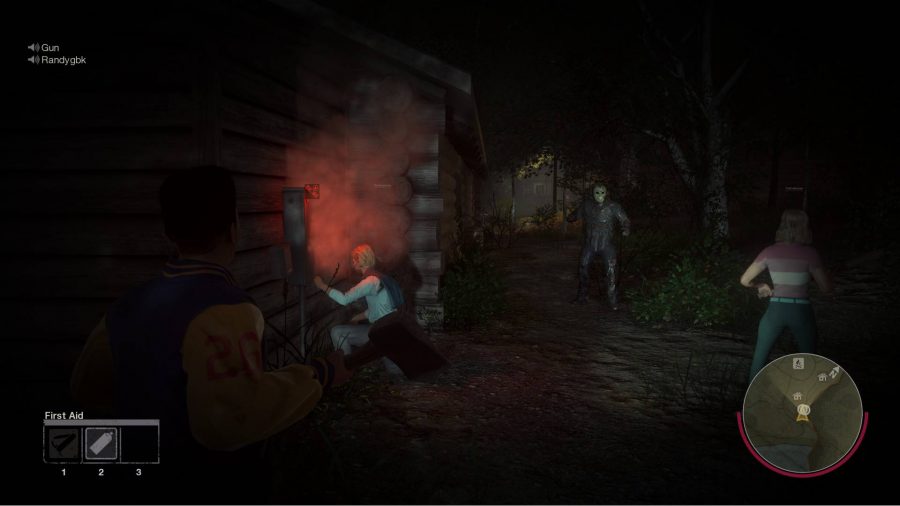 We came for the memes but we stayed for Jason. This asymmetric online multiplayer game requires you to sharpen your survival skills to take on and run away from the one and only Jason Voorhees. True to the films, the game takes place on an isolated campsite, where a group of teens and counsellor are hanging out for the summer. Naturally, those teens come under attack from Jason, so it’s up to your team to work together and escape the haunted campsite with as few casualties as possible. If teamwork isn’t your cup of the proverbial, then you’ll be thrilled to hear that you can play as the Crystal Lake Killer instead.

Friday the 13th definitely has its bugs and quirks – but much like the slasher sub genre, it’s silly horror at it’s finest. You’re placed in a lobby of eight, or can team up with friends online , all playing as teen counsellors with an array of abilities and unique skills depending on the character.

You can collect weapons and strategise, teaming up with other players to ambush Jason, or pool together and batter the brute with saucepans if one of your group is grabbed. Friday the 13th is at its best and most horrifying when you find yourself running along a dirt road in the dark, knowing Jason is out there somewhere, watching, waiting to strike. Like Phasmophobia, there’s true horror here, but the emphasis is definitely on teamwork. 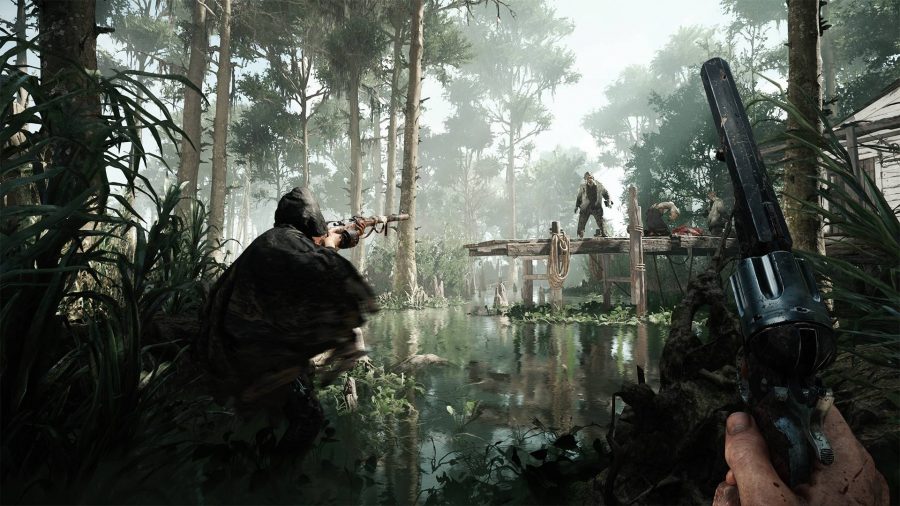 This is a bit of a stretch, as it doesn’t exactly have ghosts, but this game sits in a genreless state, flinging horror, action, and PvP at us like a rabid ghoul. In deep dark, misty depths of the Louisiana bayou, between rundown barns and abandoned factories, your online bounty hunting duo sets out to slay monsters and extract with as much money as possible.

Initially it seems like your average, run-of-the-mill, online multiplayer shootout, but as you tread further into the dark corners of the map, there are plenty of other nasties aside from other people to take on, like zombies, mutated spiders, and fully fledged monsters that also want you dead. No investigative skills are required, instead, grab a gun, hunt for resources, and weather it out.