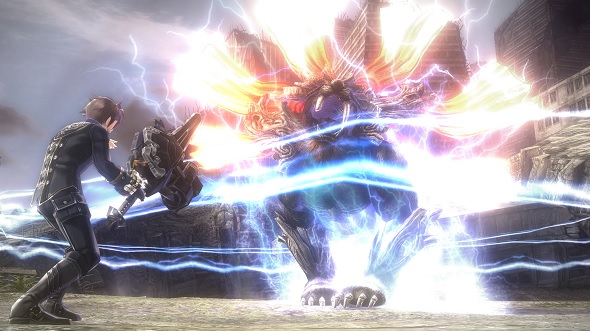 The Early Hands-on and Development Summit is being held in Tokyo this weekend, and Bandai Namco was there to give a demo of their upcoming demon-mashing sequel God Eater 3.

God Eater can be more fun with a friend. Here’s our rundown of the best co-op games on PC.

Gematsu points to several Japanese outlets who got to spend some time with the game, including Dengeki Online, who filmed some of their playtime from off screen. Dengeki also has some new exclusive screenshots.

The fact that it’s off-screen footage instead of proper game capture makes God Eater 3 even harder to read than God Eater is under normal circumstances, but there are still some interesting things to see. One is the Heavy Moon God Arc, a semi-circular weapon that can extend for slashes.

Another thing that stands out in the footage is character movement, which seems to have been given an upgrade. There’s a lengthy horizontal air dash now, and the massive Aragami seem more mobile as well.

There’s no release date set yet for God Eater 3, but Bandai Namco have confirmed it will launch on PC alongside the Playstation 4 release.