Since its PlayStation 4 launch in 2018, Santa Monica’s God of War has been included on countless ‘best of’ lists, often as an all-timer. It was indisputably a killer app for the PlayStation 4, and an impressive demonstration of just how far Sony’s console could be pushed. Now, nearly four years later, it’s arriving on PC – Kratos’ bearded glory has faded a little, but only just. God of War is not only a solid hack-and-slash romp through a refreshingly weird spin on Norse mythology, it’s also a gentle rumination on fatherhood and generational trauma.

We catch up with Kratos, the legendary Ghost of Sparta and son of Zeus, in an uncharacteristically quiet moment. He and his young son Atreus are gathering firewood in a forest in the lands far to the north. There’s snow on the ground and grey running through his thick beard, making it clear that this story is set far away in both time and space from the original series.

As we arrive back at the family’s small, secluded cabin, we learn that this simple chore serves a grim purpose: Kratos was gathering wood for a funeral pyre for his departed wife, Faye. Her wish was for her ashes to be scattered from the highest peak in the land – setting Kratos and Atreus out on a much longer journey than they realise.

The first-party games Sony has ported to PC – Horizon Zero Dawn and Days Gone – have all been showcases for the quality and polish it demands of its tentpole series, and God of War is no exception. There’s an impressive seamlessness to God of War, highlighted by its one-take cinematography – through exploration, cutscenes, and gory battles, you’re never jolted from one view into another. 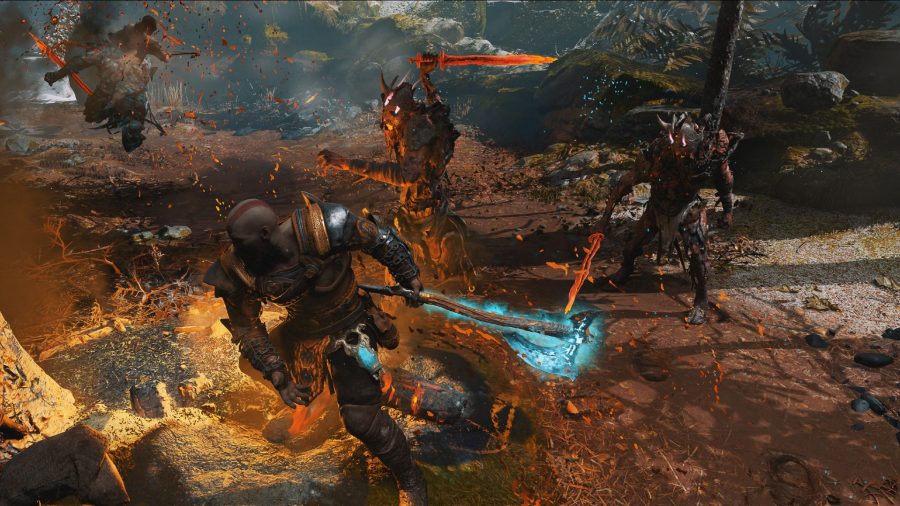 As a series, God of War is synonymous with videogame excess: each new entry has typically sought to outdo the last in the scale of boss encounters, the amount of viscera in each brutal fight, and even in the sheer number of reasons for being rated M for Mature by the ESRB. There’s certainly excess to be found in this new God of War: in one sequence, I explore the gargantuan corpse of a dead giant to fish a bit of mythical chisel out of its head, while another has me piloting a flying longship out of Helheim as undead draugr swarm the decks.

There's an impressive seamlessness to God of War, highlighted by its one-take camerawork

But I found the restraint and subtlety God of War shows are just as impressive as its decadent flourishes, if not more so. Many critics have already pointed out the satisfying feel of Kratos’ new Leviathan axe as it snaps back to his hand, recalled like Thor’s hammer after being hurled into a reaver’s sneering skull. I admire its approach to open world design, which features a large open lake ringed by points of interest, where I can stop the boat and explore crypts, solve puzzles to earn new gear and stat boosts, or press forward on the journey to the peak of the mountain. It’s just big enough to provide a sense of awesome scale for Jörmungandr, the world serpent of Viking legend, who emerges from the lake and causes the water level to drop, revealing more locations to visit and puzzles to solve.

While the story involves Norse gods and a deathless Spartan warrior who has killed both Ares and Zeus, it’s a strikingly personal tale about an absentee father’s first meaningful encounter with his son. As they explore Midgard, Atreus asks Kratos questions that any child might have about a father they barely know, and Kratos, in his gruff and often brutish way, tries to teach his son the lessons he needs in order to survive in a hostile and unforgiving world. 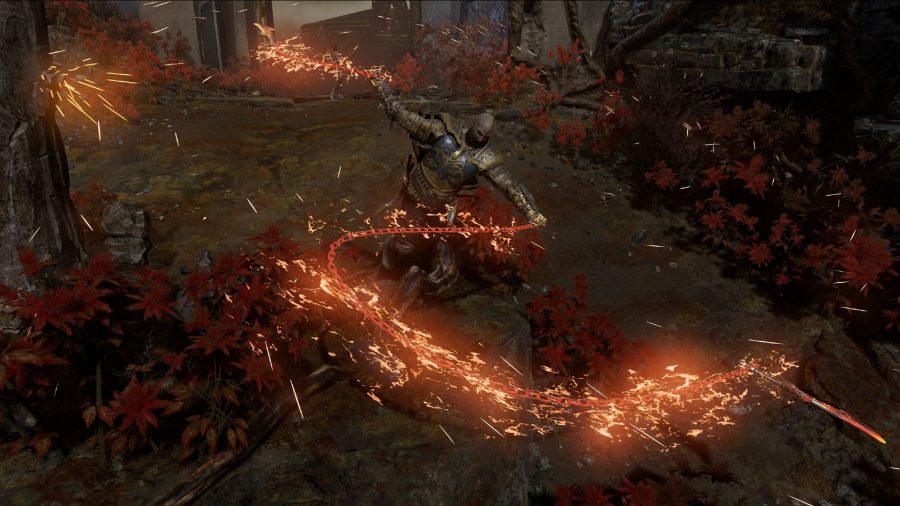 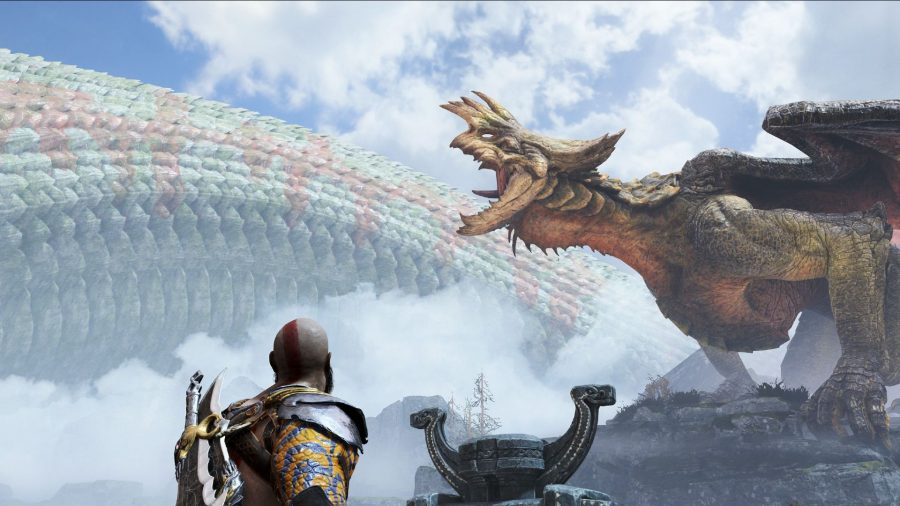 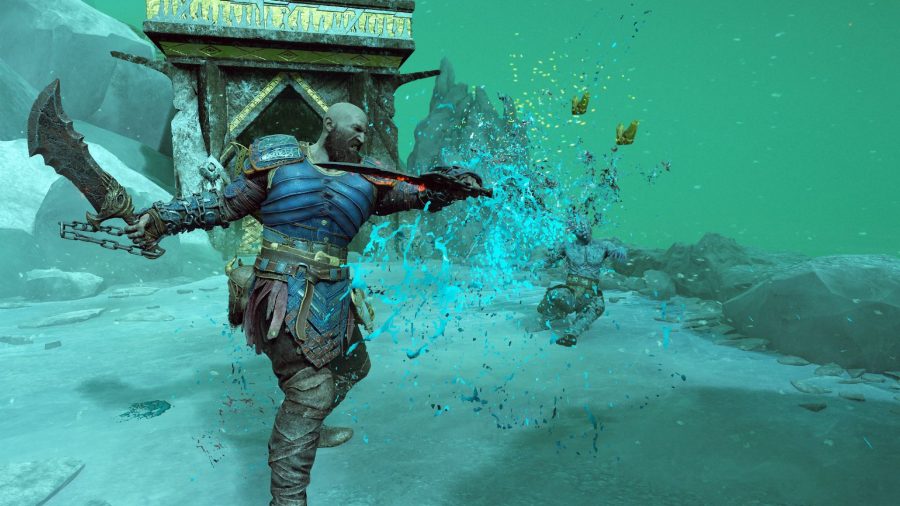 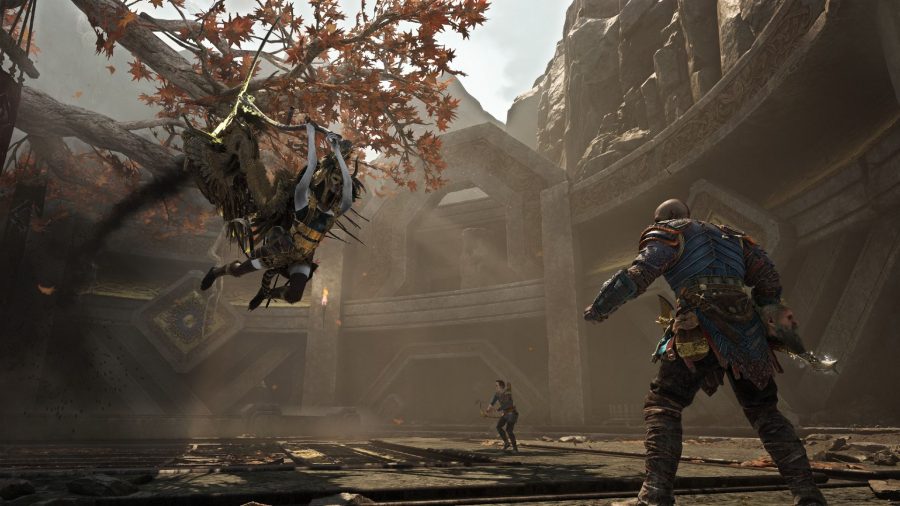 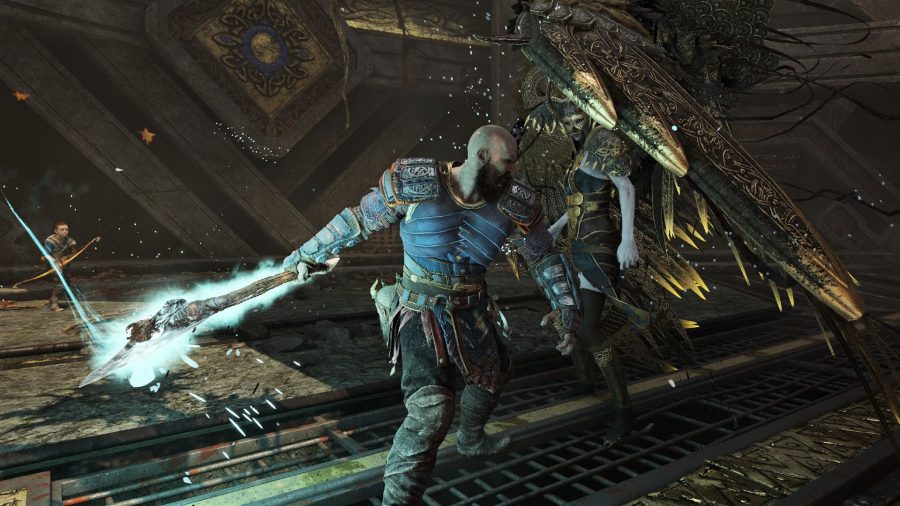 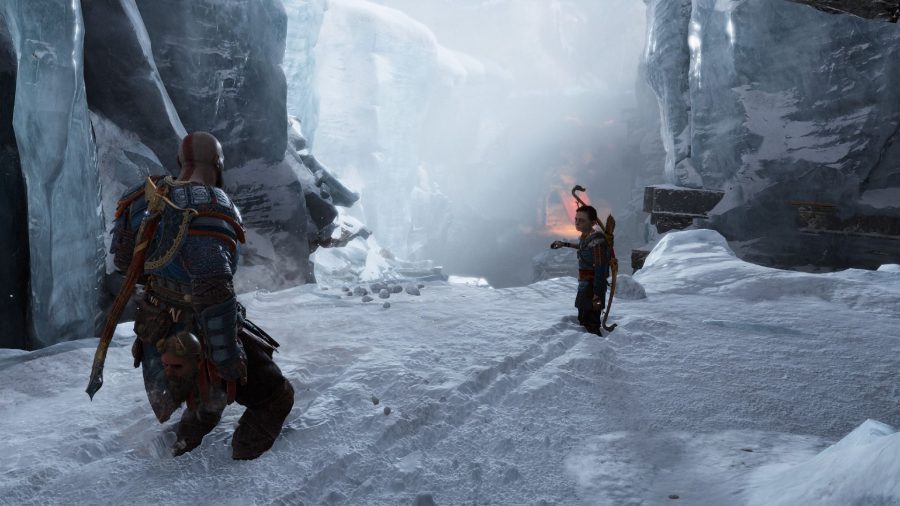 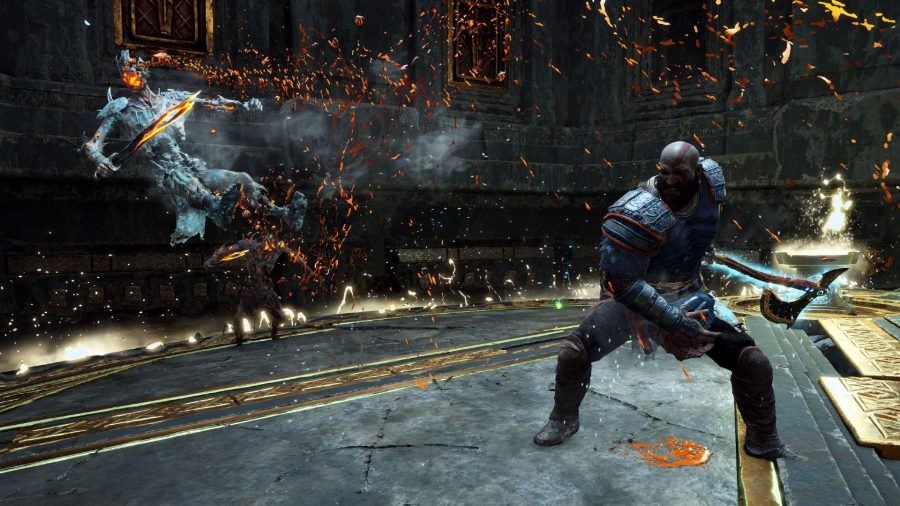 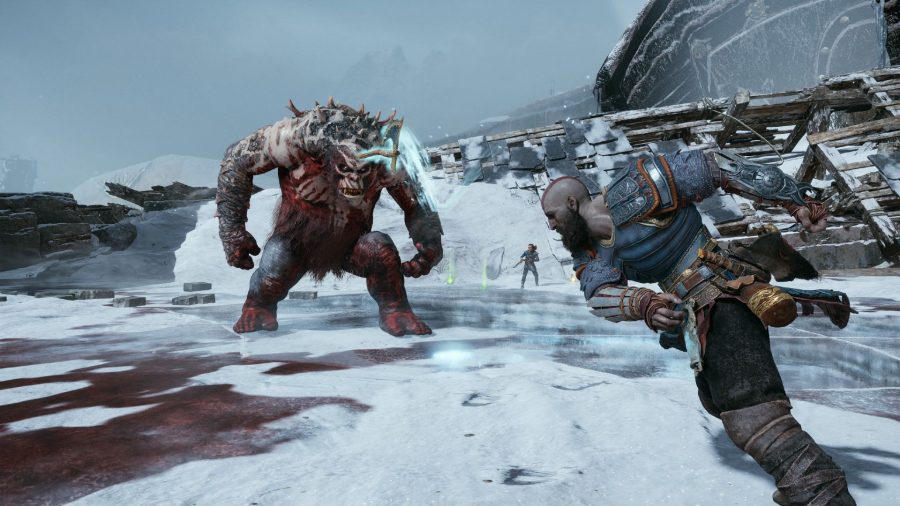 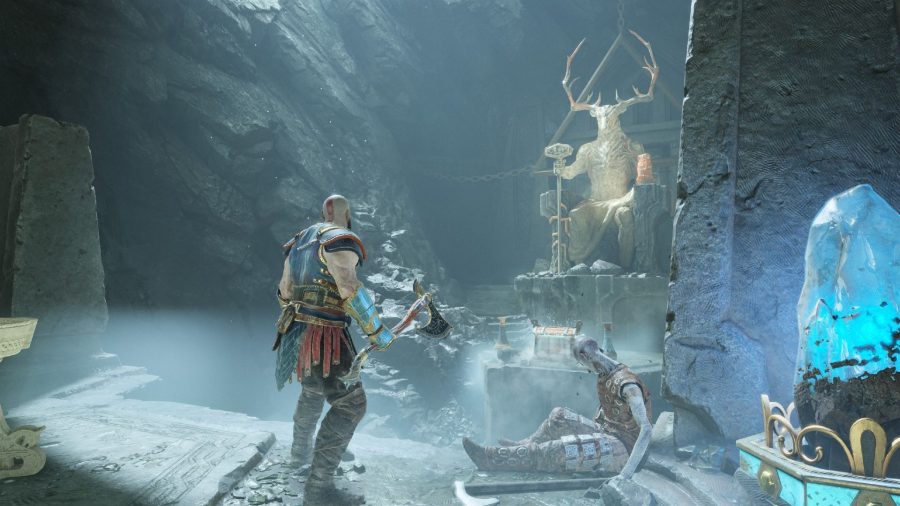 It’s Kratos, however, who winds up doing most of the learning – and the bulk of that comes from Atreus’ unspoiled curiosity and kind-heartedness. The boy probes his father about why things might happen a certain way, or what someone might have felt about them, and Kratos, mythological death machine that he is, will reflexively answer with some terse variation of “I don’t know and I don’t care.”

Kratos’ failure as a parent is driven by two factors, it turns out. First, there was his famously strained relationship with his own father, Zeus, which ultimately resulted in Kratos beating Zeus to death after nailing him to Gaia’s heart in God of War III. The second reason is much more relatable: Kratos is trying to protect Atreus by withholding information from him. He doesn’t want to tell his son that he’s a god.

For me, this is the most powerful piece of God of War – better than its kinetic and punchy combat, better than its grand visuals and sweeping sound design. At the core of the story is a compassionate understanding of a familiar phenomenon: that parents lie to their children, and that even though they do this for reasons that are usually noble, that dishonesty – that urge to overprotect – has a cost that will one day come due. 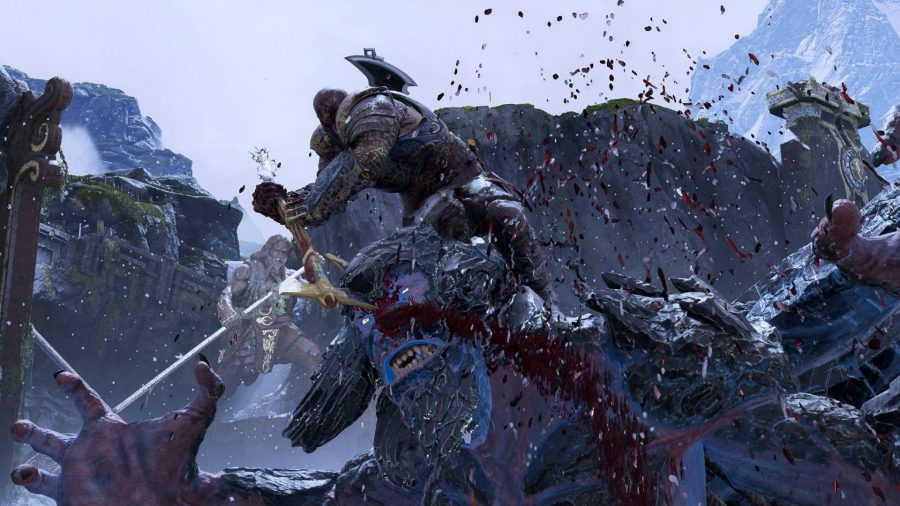 Kratos doesn’t take correction willingly, but his journey gives him a couple of tragic previews of where his protective instinct might ultimately lead. The fate of our children is unwritten, but it’s still theirs, and we can’t simply replace one predestined outcome for another of our choosing. Holding them too close, keeping them too insulated, will ultimately doom them to repeat our own mistakes, or worse.

Combat is the true centrepiece of God of War, of course. It feels great once you’ve unlocked all the basic moves: Kratos lunges forward to slash through the dusty guts of menacing draugr, and mercilessly pounds enemy faces to jelly with his bare fists when you activate his Spartan rage. The feedback is all expertly tuned, with just the right amount of bass kick and screen shake to let you feel every savage strike and crunching shield deflection. Atreus provides ranged support throughout, stunning enemies with charged arrows that leave foes vulnerable so Kratos can step in with devastating juggles and finishing moves. 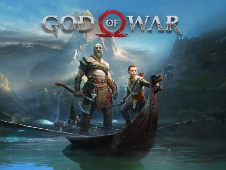 As excellent as the fighting feels in the moment, it hits a high point early on that doesn’t vary much for the rest of the game. Once you’ve found both weapons and unlocked a few runic abilities, the only thing God of War can do to change up the combat is to make it less fun by forcing you to use a particular weapon or inflating the damage output and health pools of enemies. 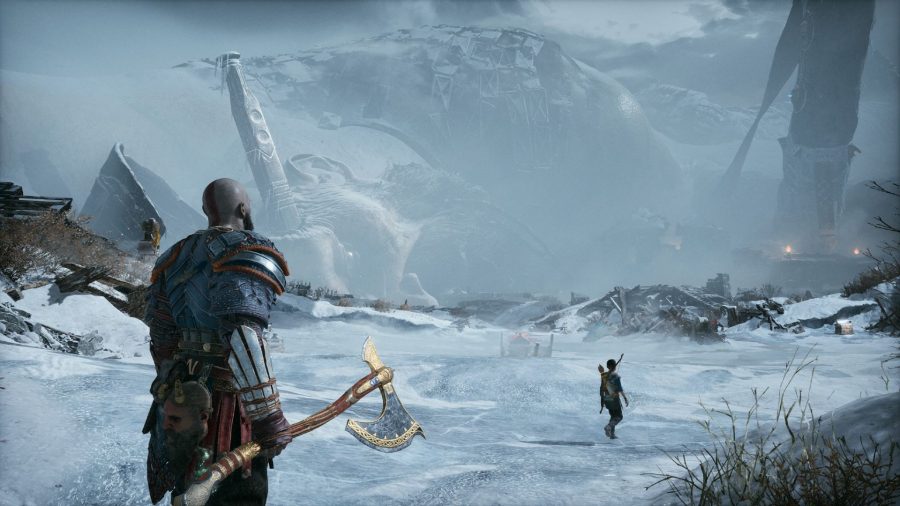 The enemy roster is disappointingly light. There are only a few basic types of monsters to battle, each with a specific combat role. These all come in a range of elemental subtypes and loadouts, but by the time I reach the endgame, the majority of the fights feel pretty repetitive. Once you’ve fought one troll, you’ve pretty much seen the extent of what they’re capable of doing, regardless of what element they’re charged up with. Beyond that, there are pretty much only two things to think about when entering combat: where’s the biggest threat, and who do I get Atreus to pin down with arrows?

Experience earned through fights and quests can be spent unlocking new weapon abilities and skills for Atreus, and you can find and upgrade new sets of armour as you explore. However, while enemies do scale in difficulty, the main questline doesn’t pose enough of a challenge to make actively pursuing upgrades worth your time, especially during the latter half of the campaign. There are brutally difficult fights in God of War, but only if you explore beyond the beaten path where you can test your might in realm rifts and valkyrie vaults, which are clearly meant to be saved until you’ve finished the story.

There’s plenty left to do once you’ve watched the credits roll, however. You’ll travel to several of the mythological Norse realms throughout your journey, but two of them – Niflheim and Muspelheim – are repeatable endgame modes in which you can grind for loot in a timed, semi-roguelike labyrinth, or take on increasingly demanding gauntlets on the path up a volcano. If you enjoy the combat, you’ve got many hours’ worth of fighting to do after you’ve completed the campaign – and that’s before you consider taking on new game plus. 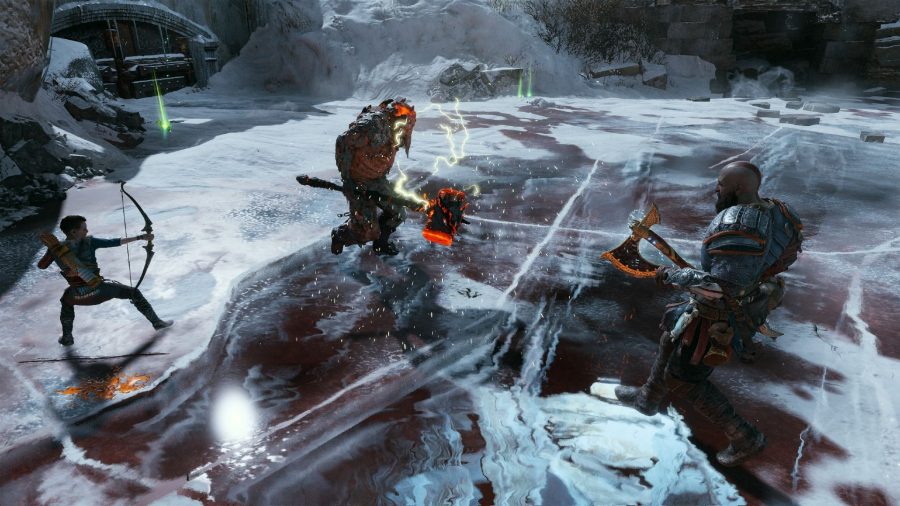 At this point, I can hear the drumming of fingers on the table. We know God of War is a good game, we heard all about it when it came out. What about the PC port? I have good news: it’s also pretty good. The Steam version features support for ultrawide monitors and 4K resolutions, with individual settings for texture detail, model quality, shadows, reflections, ‘atmospherics’, and ambient occlusion. And while God of War’s system requirements aren’t too demanding, you can also boost performance through Nvidia DLSS or AMD’s FidelityFX Super Resolution, helping you take advantage of the newly uncapped frame rate.

The enemy roster is disappointingly light, with only a few basic types of monsters to battle

There are a couple weird omissions, however: the review build lacks a true fullscreen mode, only offering borderless fullscreen and windowed display options. Similarly, while you can uncap the frame rate, if your monitor has a refresh rate of 144Hz or higher and you want to lock the frame rate to that, then 120fps is high as the manual cap goes.

Performance is generally rock solid on an RTX 2070 Super and Ryzen 9 3900X, even on the ultra preset at 1440p. I had trouble getting God of War to recognise my Elite Series 2 controller when connecting via Bluetooth, but this isn’t exclusive to God of War and connecting with a USB-C cable works just fine. 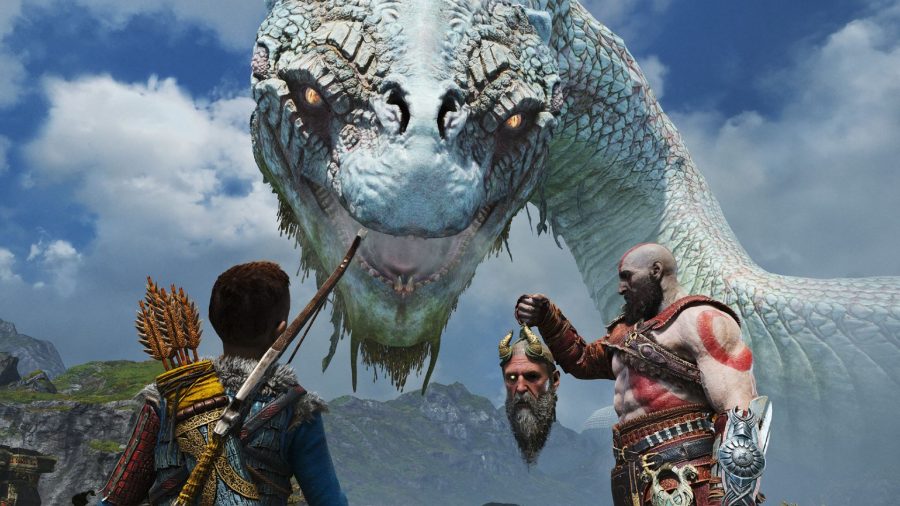 Fortunately, none of these minor issues is enough to distract from the fact that God of War is a lavishly produced game, from its tectonic boss fights to the fastidious attention to detail that enables its seamless storytelling. And for a tale about a grumpy god who spends his time filleting mythical warriors with whirling knives that bear a curious resemblance to the Unreal Engine logo, God of War is refreshingly human.

Big, brash, and surprisingly poignant, God of War arrives on PC in fine shape. Don't pass up this chance to play a console classic.