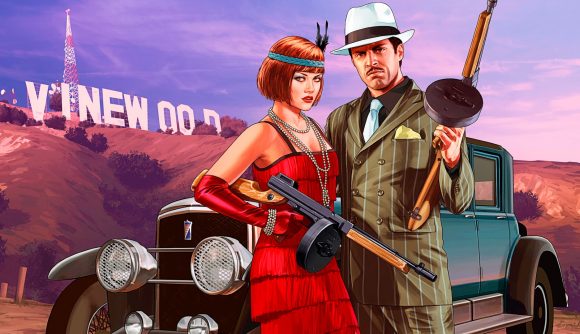 It may be reset day in Los Santos, but there’s a more important date on the horizon. Next Monday – February 14 – is Valentine’s Day, so GTA Online is getting oodles of occasion-specific goodies to make this week’s update good and proper. Rockstar Games will have the full rundown on its Newswire later, though the update is already live, so fans are documenting what’s new exactly.

You can log in to get a fancy t-shirt, weapon tints, and the Gusenberg Sweeper for free. You’ve also got an increased chance of seeing the pink diamond as loot in Cayo Perico. You can also earn triple the usual reputation points and in-game cash payout on the Shotgun Wedding deathmatch and ‘Till Death Do Us Part adversary mode. If that doesn’t send your heart aflutter, you can get triple the usual rewards doing casino story content and missions.

There’s plenty here for you car fans, too. Rockstar has added the Baller ST luxury four-door SUV from The Contract update to Legendary Motorsport. You can pick it up for $890,000 in-game bucks or $667,500 if you have something to trade in. The GTA podium vehicle is the BF Club if you’re feeling lucky. Meanwhile, the GTA Prize Ride is the Roosevelt – win a street race series for three days straight, and it’ll be yours.

Here are all of the discounts:

In other news, Rockstar has confirmed that a new GTA game is “well underway”. Take-Two Interactive CEO Strauss Zelnick also says that the GTA Trilogy is getting more updates, too, and that, while the game didn’t release in the desired state, it won’t be indicative of the quality of future releases.

If you’re looking for something to keep you occupied in the here and now, though, our GTA 5 mods and cheats guides have plenty of content for you to try.