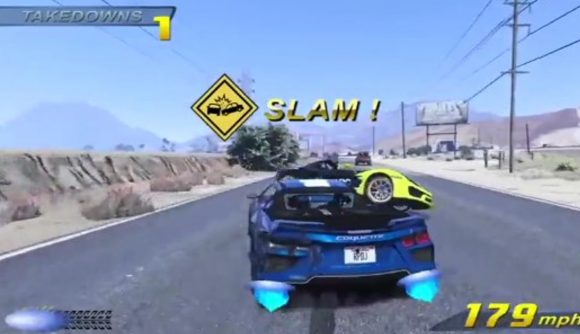 If you were a noughties teen, Burnout 3: Takedown likely has a special place in your heart. A Grand Theft Auto 5 player is bringing the classic racing game to a new generation in GTA Online, and they’ve made a very nostalgic teaser video.

Posted on Reddit, LucasRPDJ’s demonstration starts as what seems to be a recreation of Burnout 3’s opening cinematic, complete with The F-Ups’ ‘Lazy Generation’, before moving into actual gameplay. The authenticity of the menus, car select, and new song pop-ups is impressive enough, but the driving is remarkably similar, right down to the UI.

That signature chaotic vibe of Burnout is here in force, from the camera angles to the sense of speed. Staying in the mix requires taking down your opponents while maneuvering through traffic, just like Burnout, and all the little details are here, like the onscreen markers that pop up whenever you touch an opponent, and earning boost for being a skilled driver. Being GTA 5, there’s plenty of room for outlandish physics, meaning the crashes can be as audacious as ever – keep an eye out for a white sports car doing a cartwheel in the first couple of minutes.

A message after the starting screen says this is a concept trailer for a full remake, and in the clip we can see there’s a full interface for hosting and joining lobbies and so on.

We’ll be keeping an eye on this one. Burnout studio Criterion Games has shifted gears of late, now working on the next Need for Speed game.