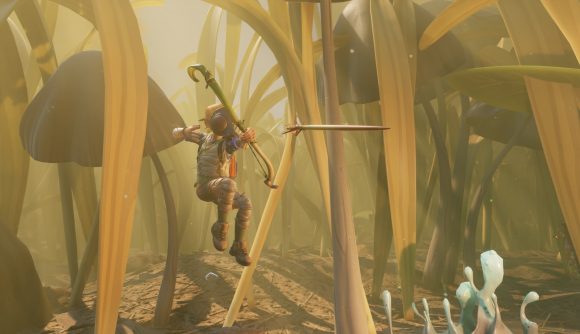 We’ve been looking forward to Grounded, Obsidian’s upcoming spin on Honey I Shrunk the Kids, ever since we first heard about it. On July 28, we’ll finally get to start playing as the game appears on Steam Early Access and Xbox Game Pass for PC.

The Grounded unlock time is 10:00 PDT / 13:00 EDT / 18:00 BST. That’s when you’ll be able to start playing it if you’re an Xbox Game Pass for PC subscriber and have gone ahead and pre-loaded it – which you can do right now through the Xbox Windows app. It’s not a huge download, only about 3.7GB to pre-install, so expect a launch-day patch before you can fire it up and start exploring the gigantic back yard.

That’s also when it will become available on Steam, although you won’t be able to pre-load Grounded through Valve’s launcher. Instead, you’ll be able to purchase Grounded beginning at that time July 28, and you’ll be able to play as soon as you have vacuumed all the tiny game pixels into your computer through the little hole in the wall, which is how the internet works.

In case you haven’t heard about Grounded, here’s the trailer:

The Early Access/Game Preview version of Grounded will be starting off with three biomes: the grasslands, hedge, and the haze. There’s some crafting and base-building to do, with single player and online co-op modes enabled. You’ll be able to access the first two tiers of weapons and armour, and go head-to-head with “at least” 10 insect species.

There’s also an arachnophobia mode, which I refuse to learn any more about.

Obsidian says it has plenty more planned content to add during the early access period, including more insects, the completed storyline, additional environments and biomes, new crafting recipes, and “additional features and updated systems to improve the entire experience,” which I think covers anything you could possibly add in early access.

If you’d prefer to be eaten by fellow humans rather than bugs, have a look at our list of the best survival games on PC.