Fortnite currently sits at the top of the battle royale pile with over 45 million players and 3.4 million concurrents. It is at the summit of a ridiculously complex – but still destructible – structure of its own making. Prowling in the vicinity, PlayerUnknown’s Battlegrounds lies prone in the long grass, keeping its rival under patient surveillance, ready to strike with a fearsome and realistic arsenal. H1Z1, despite a strong start and an impressive number of kills, died in the opening stages, choking on toxic gas.

Hopefully, you possess the knowledge required to understand this rather laboured metaphor: when it comes to battle royale games, Fortnite and PUBG are the big hitters. It is a market grab that has seen H1Z1 haemorrhage 91% of its player base since July 2017.

Find out why 2018 is the year the battle royale genre will go from strength to strength.

But there is always another round and, this time, H1Z1 developers Daybreak Games hope to find a more effective drop spot [I didn’t commission a Metaphor Royale, Harry – ed] with a 1.0 launch after three years in Early Access and a brand new battle royale mode: Auto Royale.

Where Epic Games found success by adding construction to this now famous formula – not to mention also making it free – Daybreak are looking to replicate that success with cars. Vehicles already exist in H1Z1 but the twist this new mode introduces is that the entirety of the game will take place behind the wheel. You and three other eager petrolheads have to survive while remaining in the safe zone using either a Sedan or the brand new military vehicle, the Armoured Recon Vehicle (ARV) – the two motors available at launch. At the moment, only four-person teams are supported, although Daybreak have internally tested a duo mode which could emerge in the coming weeks.

In action this is still very much H1Z1. For a game that already distinguished itself in the battle royale arena with its rapid pace and penchant for action-heavy gameplay, Auto Royale does well to take things up a notch. At launch, the mode supports up to 30 vehicles in each match; that’s 120 vicious joyriders. Successful H1Z1 players should have passed their driving test with flying colours by now: the unforgiving toxic gas that shrinks the play area in H1Z1’s main battle royale mode means that securing a vehicle is often not just desirable but essential.

Interestingly, this new mode on which Daybreak are now pinning all their hopes came about by accident. According to the studio’s general manager, Anthony Castoro, Auto Royale was born from a developmental experiment: to find a new way for players to shoot from inside of cars.

“Right now when you shoot out of a car you do it from the inside it can be a little clunky and challenging,” Castoro says. “So we made this animation system – kind of like in Grand Theft Auto – where you lean out of the car’s window, over the hood, or over the roof and aim in 360.

“But we found that a group of three or four people all firing at the same time at another team on foot were too powerful.” As such, it was judged impossible to add without being game breaking, but Castoro’s team had so much fun that they had it form the foundation of a new battle royale mode. Unlike the most popular battle royale games today, H1Z1 normally does not allow you to choose your starting location. While this is to change in the normal mode as part of the 1.0 launch it will stay in place in Auto Royale for the time being. The match commences with you and your team in your car inside a crate that parachutes down to a random location. Then you are dramatically spat out like a cannonball, guns already equipped. That is unless your hunger for vehicular carnage is so overwhelming that you shoot your way out early.

Surely, though, the speed a car confers reduces the initial peril of being outside the first safe zone? “We did have to modify the speeds and timing of the gas to make sure it was still compelling,” Castoro admits. However, while you might be able to easily evade the deadly gas at the round’s outset, the temptation to risk skirting the edge of the gas in search of better loot remains a thrill. The rhythm of a match might be different but the core laws of the battle royale game are immutable.

While you are armed at the beginning of Auto Royale you will still need to find a way to get an edge on the competition. This comes in either single-use or permanent forms. The former, such as oil slicks, smoke canisters, and landmines are useful for frustrating a pursuer, but there are also four perks that last as long as you can avoid becoming an ignominious wreck by the side of the road. 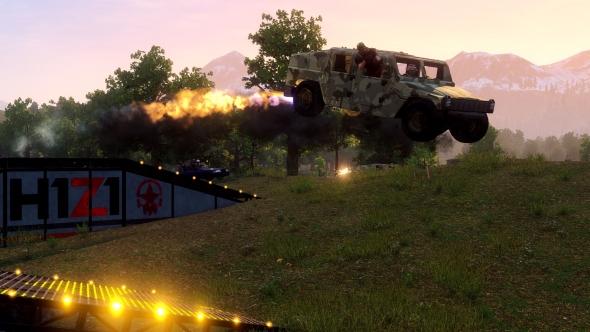 The first of these permanent perks is a roll cage to reduce the damage you take driving madly through fences and objects. Then there is a boost to speed when driving through shallow lakes and dried-up riverbeds – a significant advantage if the safe zone is centered on a boggy area. Third is a health upgrade for the car and your team, and lastly there is bulletproof glass, which better protects your passengers from gunfire so long as they are not leaning out of the car.

These power-ups are dotted liberally across the map, some ready to be driven over and collected, whereas others are hidden in destructible crates or released from the torched remains of another team’s vehicle. To increase the tension, better and more powerful perks are released more frequently at the business end of the match. If, by this time, your team finds themselves without any pickups, you do at least have the guns from the start to rely on: successful shots on other players can incapacitate them, necessitating a heal or seat swap. The former, of course, temporarily takes another of your number out of the game.

Some items only drop in mid-air, however, and only reachable with the smattering of ramps that have been added to the map. I witness a number of ridiculous manoeuvres as cars launch themselves off boost pads onto tall towers, only to make another daring jump and come crashing down on a rival team. Your capacity to pull this off will depend on your vehicle: the comparatively fragile Sedan allows you to be more agile in your movement, but the ARV, despite its slowness, takes more damage and has an armoured rear.

It takes no time for the round I watch to descend into madness. Fire ravenously licks at a patch of oil, trapping a few victims in its emergent chaos. It is “like Twisted Metal meets Mario Kart,” Castoro suggests. You could say the action has been really ramped up.

At first glance, the map hardly looks any different in terms of its layout and aesthetic. H1Z1 is not an attractive game and, from what I can see, this new mode has not changed much. However, PUBG proves that the bewitching concept of the battle royale transcends graphical beauty. In fact, most of the changes and shortcuts that make Auto Royale possible were completed in a matter of weeks.

“It was actually easier than we originally anticipated,” Castoro says. “We were able to reuse the Z2 map without having to do a huge update or major changes to the map.” The team found that, when you are locked inside a car, you have little need for home decor.

Auto Royale, despite coming into existence in just a few weeks and pretty much by happenstance, takes the battle royale genre in an intriguing new direction. The undertones of Grand Theft Auto and Twisted Metal introduced with a vehicles-only mode present the possibilities of tremendous anarchic fun with friends. Lapsed H1Z1-ers should give this free update a go, but as far as whether Auto Royale will herald a sea change at the summit of the most popular battle royale games of the moment, I am unconvinced.

For H1Z1 to restore and then build on its player base zenith of late-2016 seems impossible, especially given how recognisable the top titles in the genre are, and the sheer number of battle royale upstarts on the way. Auto Royale is entertaining but, if it is successful, a certain PlayerUnknown will likely come a-poachin’.

H1Z1 launches from Early Access and adds the free Auto Royale update today. Let us know whether you will be getting behind the battle royale wheel in the comments below.