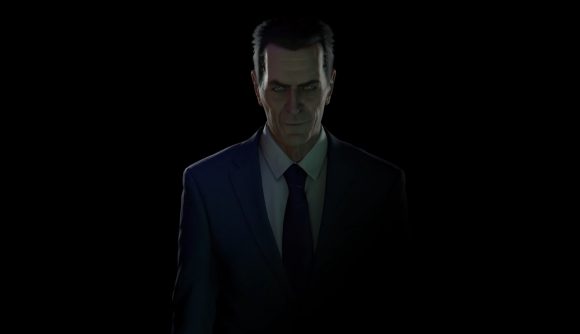 Happy new year, esteemed and faithful PCGamesN readers! Welcome to a whole new decade (no, I will not accept the idea that 2020 isn’t part of ‘the twenties,’ but best of luck to everyone who does). It’s a perfect time to leave behind old things and look toward the future – and to stoke rumors surrounding the hotly anticipated return of a franchise once thought long-dead. Half-Life’s G-man, the mysterious figure at the root of Black Mesa’s ominous experiments programme, has returned with a message.

Mike Shapiro, the voice actor who supplied the G-man’s distinctive deep and creaky cadence, posted a video to Twitter Monday, with no explanation attached. The video shows several close-up images of Half-Life’s G-man, along with an ominous message.

“Should old acquaintances be forgot? Well, after so much… time, some things can prove difficult to remember,” he says, and you can just about hear the evil grin spreading across his face. “See you in the new year. And… do prepare for… consequences, hm?”

As Tyler McVicker – also known as Valve News Network – put it, “Oh my god what the fuck.”

After 12 years, it’s actually pretty heartwarming to hear the G-man’s voice, unsettling as it is, and as creepy as his reference to “consequences” might be. He’s going to be part of our world again, and there’s something… weirdly reassuring about that.

The message almost certainly refers to Valve’s upcoming Half-Life: Alyx, the VR-only title that’s set to reawaken the Half-Life franchise after its long absence. The Half-Life: Alyx release date is currently set for some time in March, so we’ll find out what the G-man has in store for us then.

“I admit I have a fascination with those who adapt and survive against all odds,” the G-man himself once said (in Half-Life: Opposing Force). “They rather remind me of myself.”