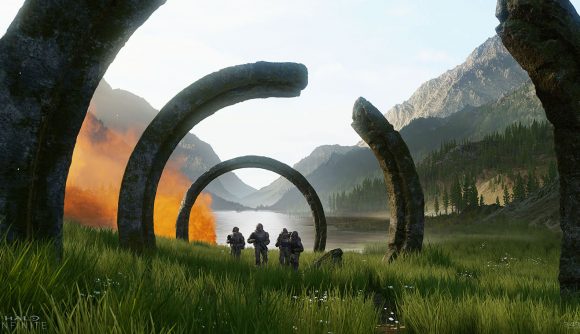 343 Industries has been synonymous with the Halo franchise ever since Bungie split off from Microsoft back in 2007. For Halo Infinite, 343 is partnering with another veteran Halo studio, SkyBox Labs, this time giving the Vancouver-based studio an expanded role in the development of the next entry in the series.

SkyBox announced the partnership in a press release July 26th, and co-founders Shyang Kong and Steven Silvester both said that they’re looking forward to working on Master Chief’s next adventure.

“Seeing the new art style and the return of the Master Chief, combined with the technology of the Slipspace Engine, has our studio energized and focused on teaming up with our partners at 343 Industries to realize the vision of Halo Infinite,” Silvester said in the statement.

Microsoft unveiled Halo Infinite at this year’s E3, debuting a trailer full of lush woodland environments and lifelike herds of animals. The trailer showcases what 343 has been working on for years – the Slipspace Engine Silvester mentioned in the press release.

With 343 dedicating internal resources to the development of a new engine, it makes sense that SkyBox would take on additional duties for Halo Infinite. SkyBox says its developers will be assisting with AI, gameplay, networking, and graphics.

SkyBox nearly doubled its staff in 2017 and the studio says it’s still bringing more people on board to work on Halo Infinite. The studio worked with 343 Industries on 2016’s Halo 5: Forge, but it has also contributed to several real-time strategy titles from Microsoft Studios, including Age of Mythology, Age of Empires II HD, and several expansions. The studio also developed and published the quirky turn-based strategy title TASTEE: Lethal Tactics, which launched in 2016.

Here’s everything we know about Halo Infinite so far. Fair warning: it’s not very much, but it does include our guess on a possible release timeframe and how it might differ from previous Halo games.