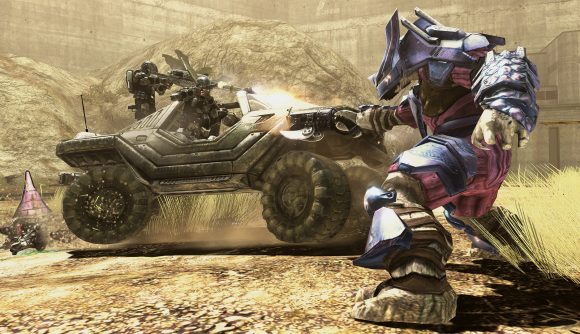 A Halo movie has been in various stages of production, with some of the biggest names in Hollywood attached, for over 15 years. Back in the mid-2000s, Pan’s Labyrinth and The Shape of Water director Guillermo Del Toro was looking to adapt the FPS game, and his ideas were creative, to say the least.

The revelation comes from a discussion featuring several of the developers on 2001’s Halo: Combat Evolved (cheers, IGN). Marcus Lehto, Marty O’Donnell, Paul Russel, Paul Bertone, and Jaime Griesemer all take part in the conversation, all while reacting to a speedrun by Halo speedrunner GarishGoblin. The expected stories and tidbits on the development of the original game are traded, but towards the end, Russel delivers an inside scoop on Del Toro’s vision for a Halo film.

According to him, the Hellboy and Crimson Peak filmmaker wanted to give Master Chief a twin, that would have defected and joined The Flood. “Master Chief had a twin brother, and the twin brother sided with The Flood,” Russel explains. “And then the end of the movie was going to be brother against brother.” Russel elaborates that Del Toro pitched his idea to what’s presumed to be Joseph Staten, Combat Evolved’s writer and cinematic director, at Staten’s house. “Del Toro was pitching this to Joe at his house. He was punching Joe on the arm and going, ‘And they’re brothers! And they’re going to fight at the end!'”

Nobody else in the video can confirm or deny this happened, but Russel’s adamant he can find someone to back him up. It sounds like it was just an idea, something Del Toro was thinking about. The Oscar-winner did put together a script with D. B. Weiss, of Game of Thrones fame, but eventually left the nascent Halo production to do Hellboy 2: The Golden Army in 2006 or so.

You can see the full video below, with the above occurring around 58:54:

Two live-action Halo projects have made it to screens since: 2012’s Halo: Forward Unto Dawn, and the Ridley Scott-produced Halo: Nightfall in 2015. A Steven Spielberg-produced TV series is due next year, as is the upcoming game, Halo Infinite.