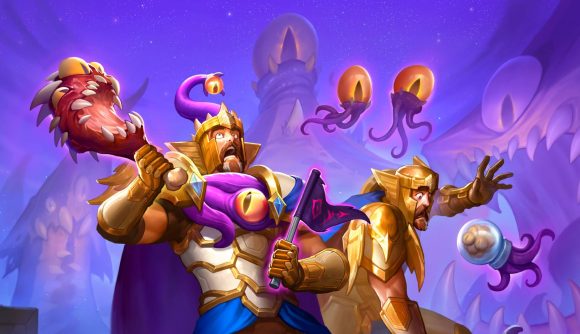 Following a wave of negative fan feedback on Hearthstone’s current rewards track, the card game’s lead designer says Blizzard is planning on stretching out the next expansion’s rewards track from 50 tiers to 100, giving players smaller rewards more frequently to keep things from feeling like a slog.

August Dean Ayala, Hearthstone’s lead designer, took to the game’s subreddit to give fans a heads up about changes coming with the next expansion. While Hearthstone’s current rewards track can feel like a massive grind, particularly once you hit level 35, Blizzard apparently plans to alleviate that feeling by giving the next rewards track 100 tiers, all while keeping the total amount of rewards and experience requirements largely the same.

“Our latest reward track for the next expansion has 100 levels,” Ayala wrote, responding to a post that encouraged players to grind it out to level 50 on the current track. That original post points out that the post-level 50 experience feels good – rewards come more frequently than they do while you’re grinding out experience from level 35 to 50.

Our resident Hearthstone explainer Christian Vaz reckons the move to 100 tiers for the next rewards track is a good one. “Switching to 100 levels is probably for the best, since it’ll make it seem like you are actually making progress,” he says. “The current ‘issue’ with the rewards track right now is that the later levels (beyond 35) take quite a while to reach because they need more and more XP, whereas it seems like the developers want to spread it out so it doesn’t feel like such a slog.”

So, while the requirements and total reward track payout aren’t being changed for the next pass, you’ll see smaller-sized rewards twice as often as you do now. If you think of the track like a trail of breadcrumbs, imagine the crumbs have been halved and spread out along the same length of trail.

On Twitter, Ayala later pointed out that this is still subject to change before the launch of the next expansion.

Worth noting I mentioned latest version, these things go through a lot of iteration. Sharing information early always has the risk of design changes at a later date causing confusion, though I think it's still worth it to keep people in the loop.

“Worth noting I mentioned the latest version,” he said. “These things go through a lot of iteration. Sharing information early always has the risk of design changes at a later date causing confusion, though I think it’s still worth it to keep people in the loop.”