Carentan is one of the most recognisable battlefields of World War II. The little French town at the end of an inlet off the eastern side of Normandy’s Cotentin Peninsula was a key link point for the Allied invasion – holding Carentan meant the invading troops at Utah Beach and Omaha Beach could join to form a continuous defensive line and hold off the expected German counterattack. It’s been the setting for dozens of films and games, and now it’s a map in rotation in Hell Let Loose, Black Matter’s large-scale tactical shooter.

You’ve seen Carentan before, whether it’s been in Band of Brothers or Call of Duty. But you’ve probably never seen so much of it: Hell Let Loose’s Carentan map includes not only the full town centre, but also a good chunk of the outlying farmlands and surrounding terrain. The village’s quaint port and lovely shop fronts are nestled in a warren of cobblestone streets that give way to the fields and marshes of the Normandy countryside, where Panzers and Shermans trade fire across the hedgerows.

The Carentan map comes alongside a major title update for Hell Let Loose, which for now is still in early access. Sound effects have been overhauled to pack more punch and to take account of things like the ambient space. The animation systems both for the pair of hands you see holding your weapon and for other soldiers moving around the battlefield have been reworked, and everything now has a better sense of gravity,  placement, and flow.

The town of Carentan is undoubtedly the star of the show, though. Hell Let Loose is a game about working as part of a squad, and the village’s tight streets will put your teamworking abilities to the test. It’s easy to lose sight of each other, and when that happens you can find yourself without backup, looking down a deserted street lined with darkened windows, suddenly feeling very alone indeed. 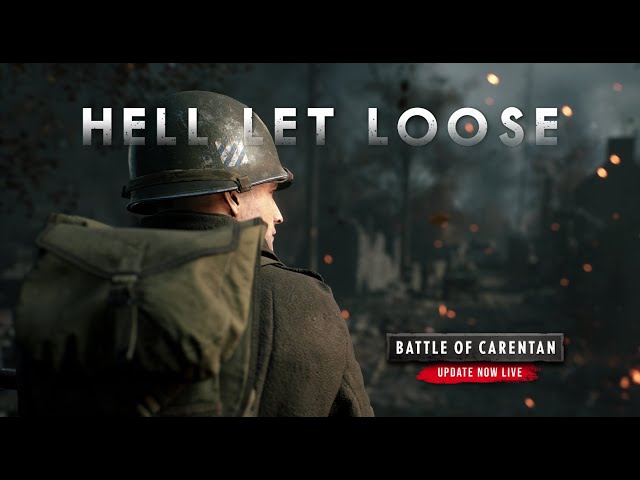 A few days after Carentan launched, Black Matter held a free weekend for Hell Let Loose, bringing in a host of brand new players. Your humble correspondent was among them, and I was learning the ropes of the game as I learned the twists and turns of Carentan itself. This made for an experience that was truer to Band of Brothers than any I’ve ever had in a game: once, after ditching out of a tank that had become irretrievably lodged in a ditch, I wandered into a deserted area of town holding only my crewman’s sidearm.

Hearing the sound of approaching enemy armour, I crouched beside a stone wall, hoping not to be noticed by someone who could be hiding in any number of street corners or second storey windows. I stood to peek over the low wall, and as I did, an enemy soldier came stumbling up the path on the other side. There was a strange moment in which we stared at each other, a bit stunned to suddenly be face to face.

Then I shot him, and everything was quiet again.

Players feel their expectations are authentic, but it's probably a mixture of watching Band of Brothers and playing all the game versions of Carentan

That encounter was eerily reminiscent of a particular scene in episode three of Band of Brothers, in which a German soldier stumbles out through a wall that’s been blown open by a bazooka blast. One of Easy Company stops in the street, pulls a pistol, and fells him in a shot. That coldly personal moment was recreated in Hell Let Loose for the Carentan update’s trailer.

Black Matter studio lead Max Rea says the development team has tried to strike a balance between the historical reality of what actually happened during the Battle of Carentan and D-Day, and what players subconsciously expect from a game dealing with those subjects. Player expectations, he explains, will more often than not be informed by other media. For Carentan and for much of the territory covered in Hell Let Loose, that’s Band of Brothers. “Those expectations they have, they feel are authentic,” he says. “In actual fact, it’s probably a mixture of watching Band of Brothers and playing all the game versions of Carentan. So for us it was very much a question of making sure we had those key locations or those key structures that you did see in Band of Brothers, and then recreating the elements from Band of Brothers and other games that you see that I think have given Carentan its interest as a location for city fighting.”

These competing ideas of what really happened and what’s best for the game meet in certain elements of Carentan: most home garden areas and many shops are closed off and unexplorable, reflecting the way almost all of the town’s citizens barricaded their homes and workplaces and fled immediately prior to the invasion. This creates long urban trenches with clear sightlines, where it’s crucial to know where to turn for flanking routes. 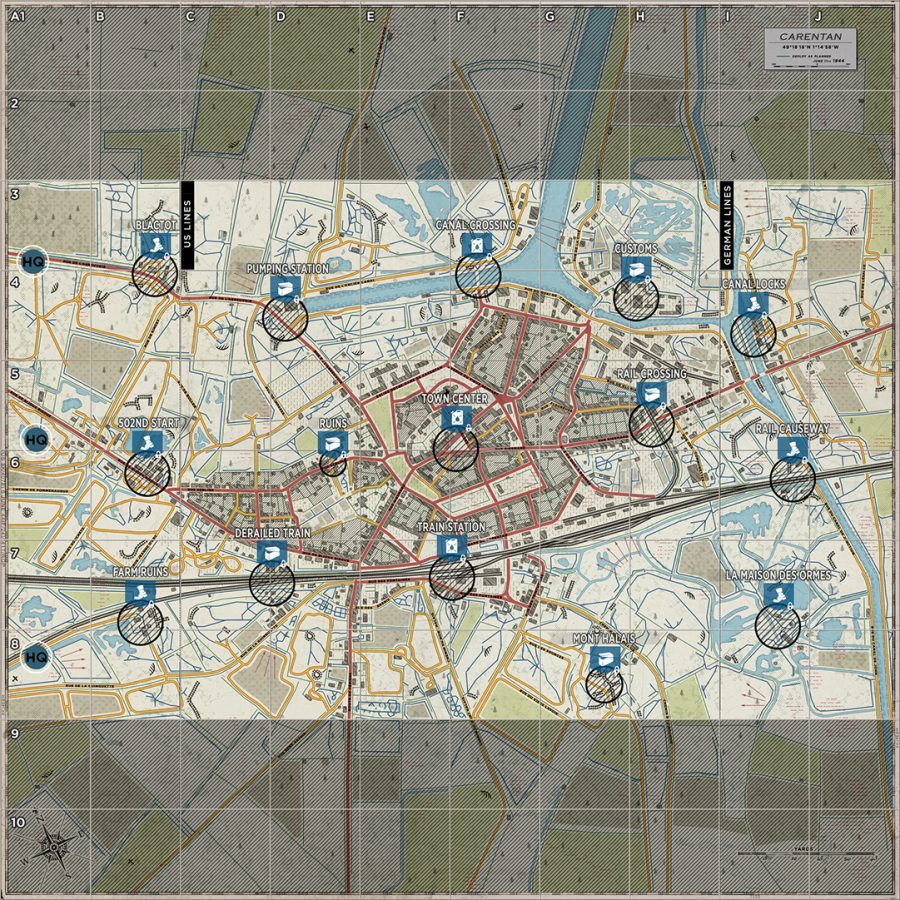 The launch of Update 7 hasn’t been completely smooth – players have reported new crashes, and the Carentan map can bring framerates to their knees in certain areas, particularly near the centre, where there are thousands of bits of masonry and splintered furniture all needing the engine to draw little shadows for them. Rea says the team has been hard at work on optimisation, and two hotfixes have rolled out since the map launched. The next patch in the works should bump framerates on lower-end systems up by five to ten, while players with higher-spec PCs will likely see more drastic improvements.

“Hell Let Loose has always had this sort of feeling of building the plane as you fly it, for lack of better phraseology,” Rea says. “This is sort of par the course for us.”

In the near term, Hell Let Loose players can expect further fixes and optimisations for Carentan and across the board, bringing all the current maps up to the same stability and visual standards. Black Matter also intends to flesh out the support role in the game, which Rea describes as “embryonic” in its current state. Further down the line are new maps, potentially on new WW2 fronts.


“We’ve got melee to do, and we’d like to do flamethrowers,” Rea says. “The sky’s the limit, honestly. More commander abilities, more loadouts which will include more guns. We don’t have an anti-tank rifle. Yet.” 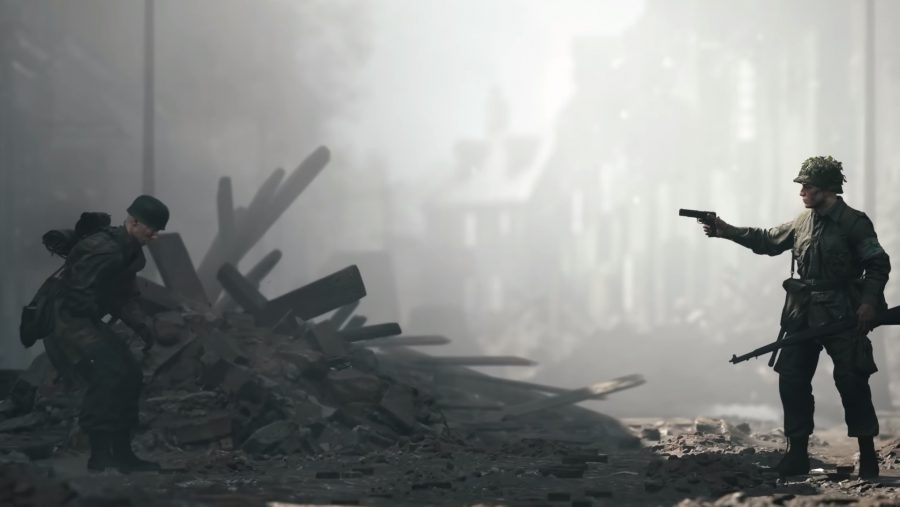 For now though, the team is focused on wrapping up this early access phase of Hell Let Loose. As Rea puts it, Black Matter doesn’t want to stay in a state that implicitly asks players to accept crashes, bugs, and optimisation problems as normal – the goal is to wrap up the Western Front as a rock-solid game ready to accept new content.

“I hope that if you follow the game into the future, you’ll be pleasantly surprised by the amount to come,” he says. “For about two years, we’ve always been saying we’re just at the start of the journey. And I think probably now the phrase will be that we’re at the end of the beginning.”

Hell Let Loose is already one of the most compelling WW2 games I’ve played in ages, and it’s currently available in early access on Steam.