Every match in Hell Let Loose generates countless individual stories of wartime drama, heroism, and absurdity. These can happen anywhere, from a nondescript Normandy hedgerow to the bombed-out shell of an apartment tower in Stalingrad. This is a World War II game that manages to illustrate something important about how wars are fought, not by being a simulation of history as it happened, but by demanding true teamwork and leadership from its players.

On the surface, Hell Let Loose is a large-scale, team-based multiplayer shooter set across a varied selection of World War II battlefields. However, it takes more than twitch reflexes and good aim to succeed. In the many matches I've played in Carentan, Utah Beach, and (with the release of update 10) now Kursk and Stalingrad as well, the deciding factor in whether our army has prevailed isn't our collective K/D ratio, it's been the presence or absence of effective squad leaders and commanders.

In addition to being a first-person shooter that's largely about capturing and holding strongpoints on a map, Hell Let Loose is a tactical strategy game played between two players who take on the commander role for their respective team. Their job is to coordinate the movement of squads, the flow of supplies, and the use of off-map support assets like artillery and aerial strafing runs.

On the front lines, it’s squad leaders who most often dictate the kind of experience you’re going to have in a given match. Good leaders not only communicate with their squad members, they also encourage better communication within the squad. A well-led assault on an enemy strongpoint involves covering the approach with a smokescreen, a volley of hand grenades, and soldiers with machine guns picking the right moment to burst forward. Taking part in such an assault is a uniquely exhilarating experience that’s like nothing else I’ve felt in a shooter. 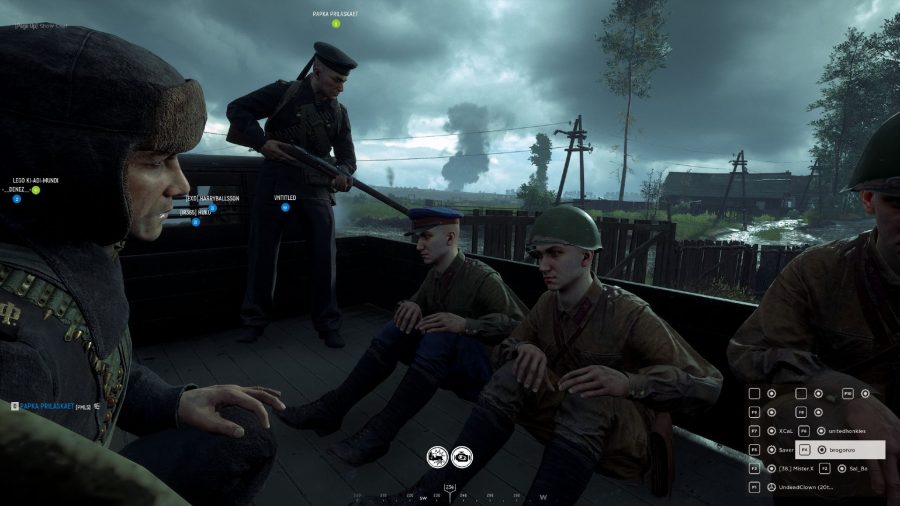 Key to this is Hell Let Loose’s player-defined spawn points. Squad leaders can place garrison markers where their teammates can start from an advanced position, but you need to have enough supplies in the area in order to build one. The decision of when and where to build ‘garries’ is one of the most important and hotly discussed topics in the Hell Let Loose metagame, and good squad leaders can use them to gain key footholds in enemy territory and secure victory.

The flip side of all this, of course, is that Hell Let Loose can be a frustrating and even dull experience without someone proactively taking on the responsibilities of leadership and performing well in the role. Without a good leader, or if communication within the squad breaks down, Hell Let Loose can collapse into a maddening loop of spawning, trudging half a kilometre to join a fellow squad member, and being shot in the head by an unseen sniper just as you arrive.

That seems like a good opportunity to talk about time to kill in Hell Let Loose – or more specifically, how there isn’t any. Death comes swiftly in this game, and at first it often feels unfair. The sound of bullets cracking by your ears is so ubiquitous when you’re near the action that it ceases to be a meaningful warning, and you’ll be downed or killed outright after just one or two hits. Strafing fighter planes, artillery strikes, or bombing runs will wipe out whole squads at a time, and there’s almost nothing you can do to respond other than to pray that a nearby medic survives the barrage. 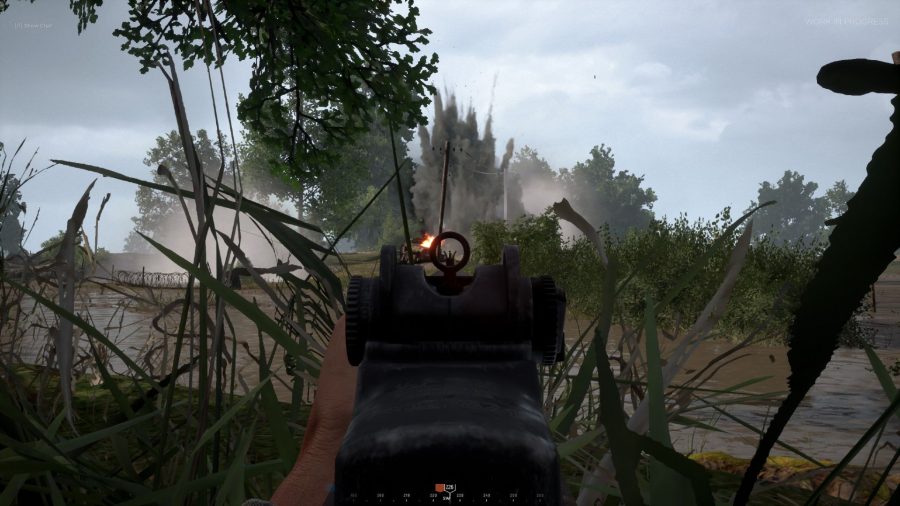 On which note, there’s a huge range of roles to play on the battlefield. In addition to the expected mix of machine gunners, grenadiers, medics, and riflemen, you can opt to be on a recon squad as either a sniper or spotter. There are tanks to be driven by commanders and crew. Engineers are crucial for constructing fortifications and resupply points, which enables the flow of materiel to the front lines.

Depending on the map and mode you’re playing, those lines will pass through a series of hardpoints, similar to the way Frontlines and Conquest modes work in the Battlefield series. These points tend to be key strategic locations, such as fortified farms, hilltops, and intersections, and most of the fighting in Hell Let Loose takes place in and around them. However, thanks to the dynamics of player-defined spawn points and the sheer scale of the maps, the way these battles unfold feels different each time. Soldiers will take up new defensive positions, forcing assaulting players to be adaptable in their tactics. 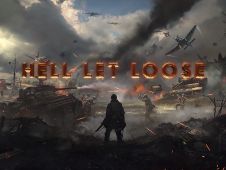 Another interesting wrinkle is the way timed respawns themselves work. Rather than simply waiting a set time after getting killed, you queue up to respawn in a wave of reinforcements, similarly to Star Wars: Battlefront, at any given garrison or HQ. That means that instead of a steady trickle of soldiers, you’ll usually see a fireteam or two spawn in at a time, which emphasises how crucial teamwork is in every combat action on the battlefield. 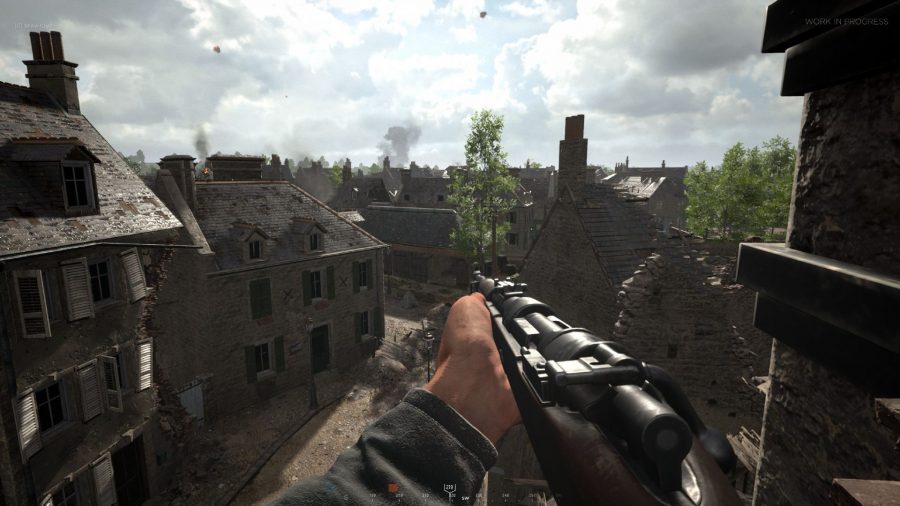 And what battlefields they are. Since its Early Access launch, Hell Let Loose has steadily grown its map pool, and it now includes the picturesque town of Carentan in Normandy, the wintery Belgian forests around Foy, and the burned-out shell of Stalingrad after sustained bombing by the Luftwaffe. Even in their devastation, the maps are stunning in both their attention to detail and their sheer scale. The fact that aerial photographs from the era were used to keep them as true to life as possible is clear in every acre – these feel like real places, even if some minor adjustments have been made for the sake of gameplay.

From the initial landing at Utah Beach, we travel inland almost a full mile, and it’s clear that this is a bold and unexpected daytime raid. The sunny wheat fields and quaint stone houses almost seem surprised that we’re there. In Hürtgen Forest, on the border between Belgium and Germany, it’s autumn and the gloomy sky and forbidding, bare trees suggest a crispness to the air that’s almost palpable at my desk. In the snowy farmland outside Foy in the winter, my squad and I rush toward a treeline for cover, but stop dead in our tracks as the forest erupts from an artillery barrage, ejecting geysers of smoke and topsoil hundreds of feet into the air in front of us.

Hell Let Loose isn’t a perfect game. There are places on certain maps that are still in need of some graphical optimisation, and the way it handles LOD is still a bit too obvious. It’s also a game that will be tough to crack for more laid-back FPS fans. One thing new players will notice right away is the lack of any tutorial process to gradually ease them into its more complex mechanics and systems. Instead, you’re thrown straight into the mix, with just about everything (barring some class-based equipment unlocks and leadership roles) available to play right away. 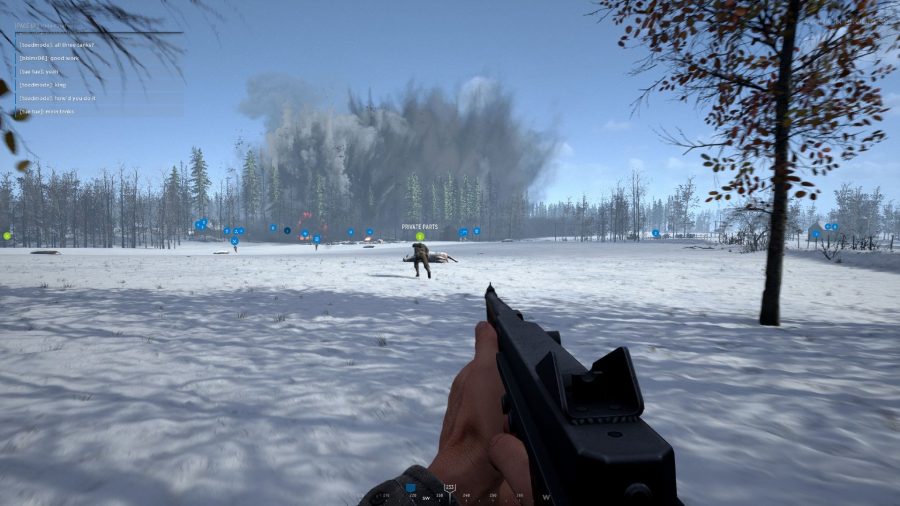 It’s an issue developer Black Matter tells me it’s constantly thinking about, so perhaps the studio may implement an onboarding process at some point. However, while I don’t want to cast the lack of a tutorial as a point in Hell Let Loose’s favour, I will say that it works well with its theme and overall mechanical intent: you have to be the ‘FNG‘ for a little while, and figure out what you’re supposed to be doing by following and listening to the stone-faced veterans.

Even in their devastation, the maps are stunning in both their attention to detail and their sheer scale

In Hell Let Loose you gradually learn by doing. If you’re moving, you’re not shooting well, so stop moving when you shoot – try unlearning that as a Call of Duty player. Over time you’ll learn when to ask your squad leader about placing a garry, what to do when you hear a tank, or how best to call out the location of enemies spotted along a ridgeline. Black Matter has told me it’s had long-time Early Access players complain that the screen-blurring effect that kicks in when you’re being suppressed had been nerfed in a recent update. In fact, the developers hadn’t changed it at all. Eventually, the players had just stopped noticing it. They had the thousand-yard stare.

Watching experienced squad leaders and commanders work shows you how to one day fill those roles yourself, and it’s hard to imagine a tutorial sequence that walks you through a series of steps that provides that kind of understanding. That said, Hell Let Loose currently demands the use of a microphone and voice chat – there’s no getting around it, particularly if you want to lead. Some basic commands – mapped to a radial menu, for instance – might help increase its accessibility for players who can’t or prefer not to get on mic. 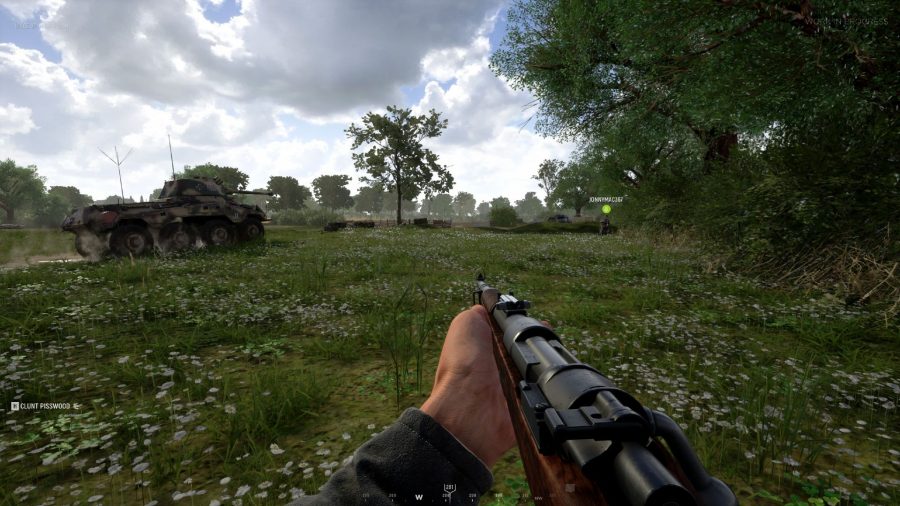 Historians have criticised the HBO series Band of Brothers for inaccuracies in its portrayal of the Normandy invasion, and perhaps rightly so, but that somewhat misses the point of what the show was trying to do. Rather than being a historical record of the important events that happened during that period of the war, Band of Brothers is a story about the relationships between Lt Dick Winters and the soldiers of 1st Platoon, Easy Company.

Similarly, Hell Let Loose falls short if approached as either a historical wargame or a shooter-based power fantasy. It is neither thing; instead, it’s an exercise in cooperation and leadership. On that front, it’s a resounding success, and one that’s well worth playing – but only if you’re willing to commit to some time in the trenches.

While it won't appeal to every shooter fan out there, Hell Let Loose's complex interplay of FPS action and real-time tactical planning rewards communication, coordination, and genuine leadership in a way few other games even attempt.