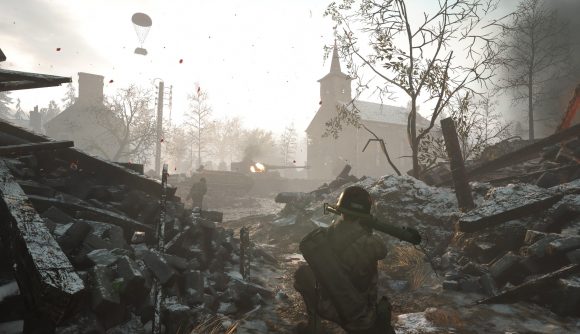 Hell Let Loose is a fantastic team-based WW2 game, but developer Black Matter is interested in making it sound a bit more authentic. The studio has announced that it’s inviting community members to record their best ‘Wilhelm scream’ and submit it for inclusion in the game as an ‘ambient soldier sound’.

The Wilhelm Scream is actually a specific piece of audio that was recorded more than 60 years ago and has been used in hundreds of films since then. It’s an iconic scream of surprise and pain, and it’s appeared in everything from Toy Story to Star Wars. What the Hell Let Loose developer is looking for are screams that are Wilhelm-esque: the kind that conveys the alarm and dismay you might experience when being blown up by an artillery round, for example.

“We’ve listened to much of the community feedback about adding greater ambience to the battlefield with the grunts, screams, and voice lines of soldiers. While we’ve been planning to create these sounds ourselves, we felt it could be good fun to open this up to our beloved community first,” writes Black Matter developer ‘Spono.’ “You can be as creative as you wish – we’re excited to see what you come up with!”

Spono clarifies that they’re not going to include anything goofy with this – they want to maintain Hell Let Loose’s gritty, filmic World War II vibe. And it’s important that all sounds recorded are personally emitted by whoever is submitting them.

And they're going to be voiced by YOU, the community!

Give us your best Wilhelm scream and become part of HLL history.

The studio is actually looking for several different sounds, both for the American and German sides. Here’s the list:

To be considered, the clips should be collected and uploaded in a YouTube video. They’ll need to be clean pieces of audio, without any effects or reverb added. You can find full instructions on how to enter over on Steam.

Hell Let Loose’s new Carentan map provided us with the truest Band of Brothers experience we’d had in videogames, making it one of the better war games around in the year 2020. If you haven’t tried it out yet, it’s worth a look – even if your battle cry isn’t ready for prime time.