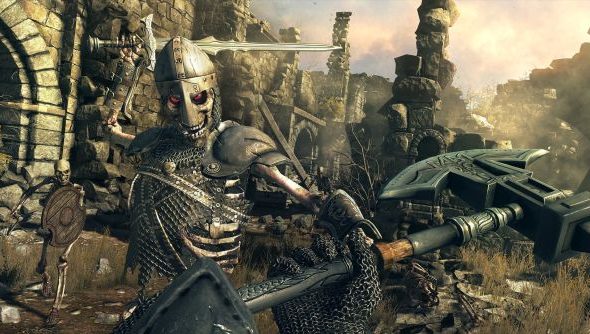 Two Techland ideas spiralled out of the mechanics of Dead Island. While Dying Light focused on making the studio’s infested open worlds more entertaining to traverse – Dead Island 2 having been handed off to Spec Ops studio Yager – Hellraid doubled down on the hitting rotting people in specific parts of their body.

It was first expected in 2013, reengineered for Steam Early Access in 2014, and then – the silence of the dead. Turns out Techland have sealed its sarcophagus for the time being.

Techland had hoped to release Hellraid this year, but instead they’re putting the skellington-fisticuffs “on hold”.

“In the recent months we conducted an internal analysis and came to the conclusion that Hellraid, in its current shape and form, is not meeting our own expectations for this project,” they wrote.

“Therefore, we decided the best course of action would be to send it back to the drawing board and invent our dark fantasy title anew.”

Techland plan to consolidate their resources for “further expansion” of the Dying Light series. That might mean more DLC like The Bozak Horde or updates to the Dying Light developer tools, but I imagine the studio will want to capitalise on the game’s goodwill (and comprehensive marketing campaign) with a sequel sooner rather than later.

“We wish to thank all our fans for your support.” they finished. You’re the best!”

Are you sorry to see Hellraid buried?