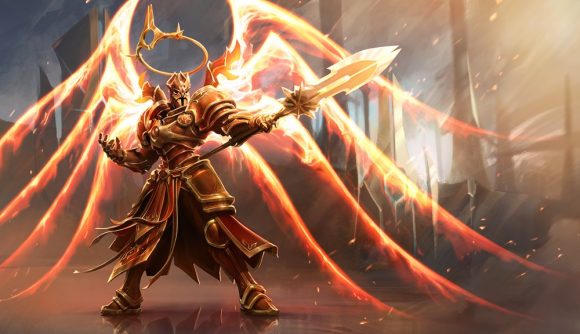 Blizzard may be scaling back on Heroes of the Storm, but the company still has a few plans left for its franchise-spanning MOBA. Imperius, one of the archangels of Diablo III, is now available to play.

Imperius is an archangel like Tyrael, and he wields the spear Solarion, which according to Blizzard lore was forged in the heart of a dying star. He’s able to summon it at will, and he’s used it in showdowns with Diablo and the demon hordes of Hell in the past. He’s not a huge fan of humanity, either, which has led to disagreements with Tyrael, who at one point negotiated a truce between Heaven and Hell. Imperius is also known as the Aspect of Valor and is a member of Heaven’s Angiris Council, which also includes the archangels Auriel, Itherael, and Tyrael.

Earlier this month, Blizzard announced it was cutting back Heroes of the Storm’s development team and moving team members onto other projects. It also announced that it was cancelling Heroes of the Storm esports events for the coming year. However, Blizzard also said it would continue to support the game with new heroes, events, and additional content.

Players have long assumed Imperius would at some point show up in the Nexus, and he’s a natural fit for the hero brawler.

Out of the High Heavens, and into the Nexus! Imperius will be playable on the PTR starting January 2. pic.twitter.com/k1wHaEWkZi

Now that Imperius is live, we can take a look at his abilities. Celestial Charge sees Imperius charge forward, dealing damage. If he hits an enemy hero, they’re stunned, and take additional damage. Solarion’s Fire releases a fiery wave which slows enemies caught in its centre. Molten Armor shrouds Imperius in flames, healing him for 100% of the damage dealt to nearby units.

Read more: HotS’ esports and dev team have been cut back

In any case, he’ll be available to play on the Public Test Realm starting January 2. He’ll be the 18th Diablo hero in the game, and the 85th Blizzard hero.