Back in the dark ages before the internet, there was HeroQuest, and it was good. HeroQuest was a board game developed by Milton Bradley and Games Workshop in the 1980s that introduced kids to the concept of rolling dice to make miniature plastic monsters fight each other. Out of print for decades, HeroQuest is now making a comeback thanks to a crowdfunding campaign set up by publisher Hasbro.

Hasbro is running its HeroQuest crowdfunding campaign on its own proprietary platform called HasLab, and it’s seeking $1 million USD (£785,160) to produce a new, revised edition of the renowned board game. Two tiers are available for pledges, which both have their own sets of rewards.

The $99.99 ‘Heroic’ tier includes the ‘core’ HeroQuest game system (yes, it’s called a ‘game system’ now), which features 71 plastic character and furniture miniatures plus four bonus hero minis and one exclusive Sir Ragnar mini, which is only available for campaign backers. Furniture like bookshelves, doorways, and torture racks in the original HeroQuest were made from plastic pieces and printed cardboard, but in this new edition, they’re fully molded from plastic and feature a lot more detail.

If you don’t remember HeroQuest, this guy will explain what it is: 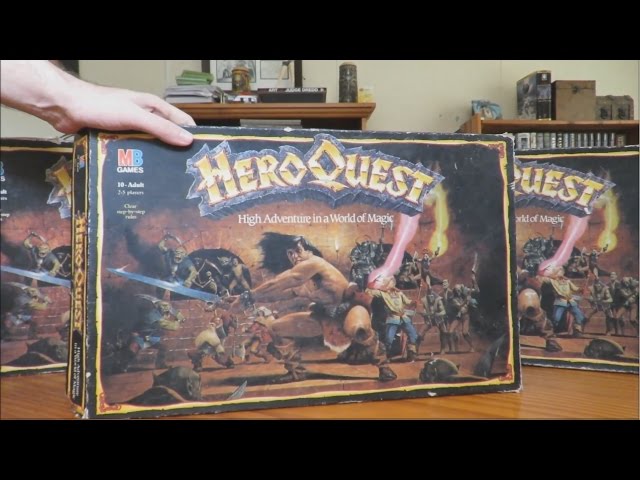 The ‘Mythic’ pledge tier includes everything in the Heroic tier, plus reprints of two of HeroQuest’s expansion packs (that’s right, a board game in the ’80s actually invented DLC). Those are Kellar’s Keep and Return of the Witch Lord, both of which come with their own unique monster minis, furniture pieces, and quest booklets.

There are stretch goals, too – at $1.2 million, there’s a gender-swapped Warlock figure; at $1.4 million, six additional combat dice; $1.6 million unlocks two extra skeleton figures; at $1.8 million, two additional goblins; and finally at $2 million the set will include a special quest book called Prophecy of Telor written by Stephen Baker, the original designer of HeroQuest.

Fantasy board games have come a long way since HeroQuest, but this new production run looks pretty plush – the miniatures, as noted above, are all much more detailed than their original counterparts were, and it’s a simple enough game to pull out and explain to a group of friends without eating up several hours’ time. The campaign has already raised more than $477,000, and there are 45 days to go. It’s an all-or-nothing campaign, but let’s face it: this is a board game with plastic miniatures – it’s going to get backed.

You may want to check out the best PC board games on Steam if you’re feeling that HeroQuest nostalgia but are looking to try something a bit newer.