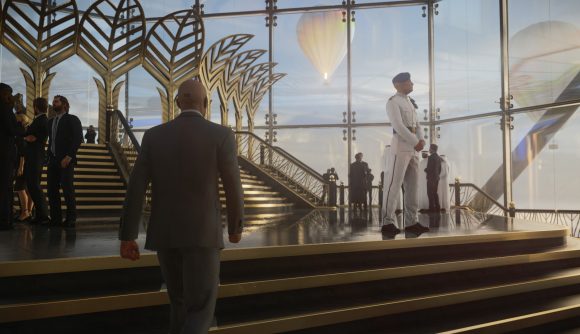 Hitman 3's opening level is the spire of a glittering skyscraper in Dubai, but there's a fly in the ointment – the Arabic text, which adorns signs and other textures throughout the otherwise stunning level, is all written incorrectly: backwards, in fact. Fortunately, IO Interactive says it's going to be fixing the error soon.

Countless Arab-speaking players have no doubt noticed the mistake, and Ahmed Salama, an associate UI/UX director with Ubisoft, was one. Salama captured and posted a screenshot that shows a metal sign with directions to various areas of the Burj Al-Ghazali, including pointers to a storage room, server room, and helipad. Large block letters are used for the English version of the directions, with gold script used for Arabic text below.

Arabic speakers, however, will immediately notice the issue – the Arabic text is written left to right, the way English is. Actual Arabic is written from right to left, which means the text that appears in the new stealth game is spelled backwards. This means the letters can't connect to each other properly, and it also means that the words are turned into gibberish.

Game developer Rami Ismail highlighted Salama’s tweet, noting that there are hundreds of millions of Arab speakers around the world and that “they’re all either thinking this or tweeting this.”

Another reminder that there's hundreds of millions of us, and they're all either thinking this or tweeting this https://t.co/opq6i8Jdxk

IO Interactive is, fortunately, taking immediate corrective action, it seems. Responding to Ismail, Hitman UI designer Morten Elgaard said the error has been flagged as a “P2 bug in our system.” As a point of reference, Elgaard says a P1 bug is something that causes a crash or prevents the game from running at all, and so P2 is just below that in terms of priority.

Sure no problem, it's clear that its something people who know Arabic would find very jarring. It's was more to let you and others know steps are being taken to rectify it 🙂

“I’m sure it will be mentioned by quite a few people before we get the fix out, as it’s in the very first level and quite spread out across it,” Elgaard says. “But it was good it was brought to our attention so it can get fixed.”

Buy now: Hitman 3 is out and ready for infiltration

Ismail, as it happens, has created a helpful online guide on how to tell whether the Arabic-style script you’re looking at is being used correctly or not.

If you’re looking for a Hitman 3 Dubai Silent Assassin, Suit Only walkthrough, we’ve got you covered.