We’ve already covered a large portion of what I played of Immortals: Fenyx Rising in Jen’s excellent preview, in which she compares Ubisoft’s latest open-world venture into Greek mythology with The Legend of Zelda. Having now played it myself, I very much agree with this.

But this time around, I want to focus on the finer details: the individual puzzle design, and how Immortals plays around with mythology. In my time with the game, I fought legendary beasts, solved fiendish puzzles, and laughed at two bickering old men.

Prometheus and Zeus are like two tramps in a park, nitpicking one another’s tall tales of past glories. Immortals is part Greek tragedy, part Samuel Beckett, but played for laughs. The bickering gods are constant companions, filling my five hours with recollections of Zeus’s colourful past, like what happened to a seer that stole his money one night. I chuckle more than a few times and enjoy my narrators more than player character Fenyx, who comes across as an over-eager fan of the Greek pantheon as she talks with the dastardly pilferer Hermes (he is also the god of thieves after all), and with Aphrodite, who, thanks to a curse from the game’s archvillain, the mighty monster Typhon, is now a beautiful tree.

The narrating gods also interfere with the game itself in places, conjuring enemies from nowhere to test me, or messing around with the size of a Cyclops I’m set to face. When they agree how big it should be and I get down to swordplay, combat isn’t too dissimilar from that in Assassin’s Creed Odyssey: when the enemy flashes red, that’s my cue to parry or dodge the incoming attack, and sneaking up on them first enables me to deal a huge chunk of damage with a stealth attack. It does take inspiration from other games too, like Bayonetta’s whole schtick of dodging at the exact moment before you’re hit to slow down time briefly. 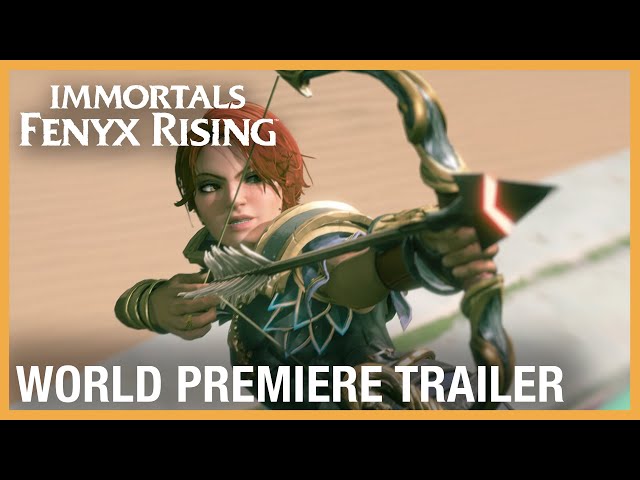 Enemies also have a stun bar that fills as you hit them. Heavier attacks with my axe fill it faster than regular attacks with my swords, but better still to use artefacts like Herakles’ gauntlets to yeet heavy boulders at my opponents instead, if I can find them. Once stunned, I’m free to attack them constantly until the bar drains.

There’s a ton of enemy variety on show. Hulking Cyclopes stomp about and shake the earth, and squirrely gorgons slither away to fire their petrifying projectiles. If it’s a mythological beast of the ancient Greek variety, it’s likely going to show up somewhere. Enemies scale up as Fenyx gets stronger too, so there’s always a hint of peril even when a lowly thorned boar rolls into my side. Regardless of how samey combat can feel at times, finishing an enemy off is always immensely satisfying – they’re batted into the sky like Team Rocket ‘blasting off‘, before finally fizzling out of existence. I feel like a baseball player scoring a home run every time.

Later on, after completing a story mission wherein I have to roll a pearl violently into the sea – think Super Monkey Ball but with more fighting – I’m let loose to do whatever I want. This is where I smack the Minotaur in his beefy face with a rock. He’s one of several legendary monsters found at specific points in the map. They’re tough fights, each with unique attacks and requiring particular strategies to defeat them, and I’m told that many more are hidden throughout the game’s different realms. The Minotaur isn’t the only one I discover: I have a close shave against Aello, one of the three harpy sisters, and stumble upon a monster called ‘Slayer of Adonis’ which, according to the myths, is Ares cosplaying as a boar. Knowing this, I decide to steer well clear. I don’t want to incur the wrath of the god of war. 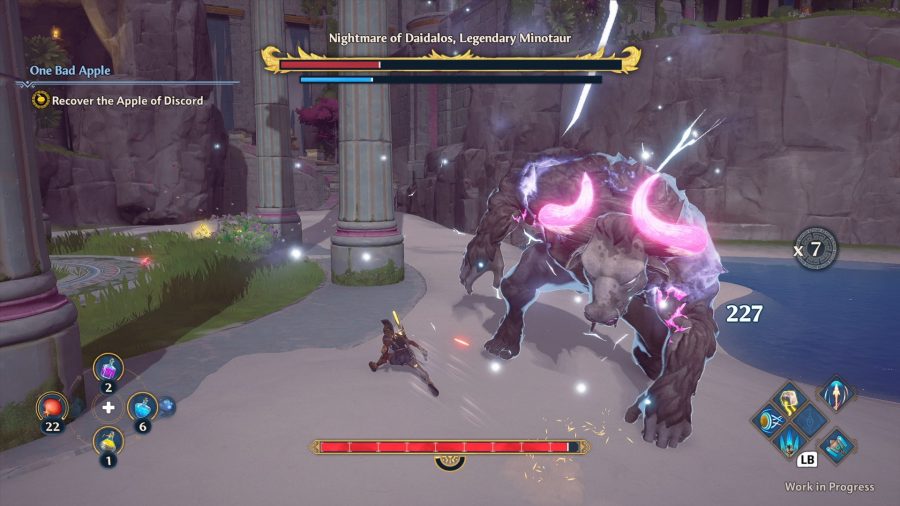 Fighting legendary monsters is just one of the many side activities I can partake in during the preview session. Off the beaten track, there are many different types of puzzles. Some require finding boulders to place on pressurised plates to open a door, while others ask that I remember the notes magically plucked on a small harp, and repeat them on a much bigger harp nearby.

I've spent an embarrassingly long time not knowing that to craft healing potions, I need to look up

One of the most rewarding such activities is breaking in horses, which involves sneaking up on them and mounting them. I could just stick with the deer I’m given when I arrive on the island, but when the game presents me with a water horse, I can’t resist. Pegasus was similarly tamed by the hero Bellerophon, so I wouldn’t be surprised if, later in the game, Fenyx gets her chance on the flying horse too – it’s a perfect mechanic for such a reference.

There’s a lot to discover in Immortals: Fenyx Rising – far more than I can see in my session. Far more, as it turns out, than I can fit comfortably in my field of vision. Because of the sheer scale of even just one region, my spatial awareness – never my forte – is flummoxed. I’m easily able to find most of the ingredients I need to craft most potions, but none for healing potions, aside from the contents of the odd chest I’m given as a reward for completing puzzles. It’s not until I’m told by a Ubisoft representative that I need to “look up more” that everything clicks: I’ve spent a rather embarrassingly long time not knowing that to craft healing potions, I need to find pomegranates in tall trees.

Revelations like this happen in some of the puzzles, too. During a stint in a Pit of Tartarus – one of the game’s Zelda-like puzzle dungeons – I need to jump on a series of pressure pads in the order indicated by a mural. I complete the first few of these with minimal fuss, but I can’t for the life of me work out where the third mural is. I go on ahead to find a mural that appears when I activate a switch. At first I assume this is the mural I’ve been searching for, but it’s actually for a different sequence of optional pressure plates behind me.

I can unriddle devious puzzles or batter enemies into the stratosphere, all while two old blokes bicker over how to tell a story

I retrace my steps and the fresh perspective eventually reveals the mural I’m after – it’s hidden just out of view on the way back to the third set of pressure plates. But for all the times I gloss over something obvious, I have my moments of inspiration too, like when I shoot an arrow through some flames hidden behind a row of columns to ignite a brazier, locked and inaccessible, on top of a distant tower. It doesn’t help with the puzzle I’m actually trying to solve, but still, I feel clever, dammit! This is where I think Immortals’ biggest strength will lie: making the player feel like a bumbling idiot one moment, then a genius the next.

I have the impression that Immortals: Fenyx Rising is a big game that’s filled with stuff to do, but at the same time I don’t feel like I’ve just been doing busywork. I feel like I can get stuck in with unriddling a devious puzzle or battering enemies into the stratosphere, all while listening to two old blokes disagree about how to tell the story. You can get a taste for yourself with the free demo on Google Stadia right now, which has an exclusive island to explore. The Immortals Fenyx Rising release date is December 3.