Icarus Wings aren’t locked behind a Vault of Tartaros, instead, you have to complete a series of puzzles beforehand located near the Observatory. These puzzles use all the tools you’ve picked up across your journey so far – consider it a final test before the main adventure begins.

After picking up the Jar of Aiolos as outlined in our Bow of Odysseus guide, head over to the Observatory. Climb to the top of the stairs where you’ll find a square with 16 holes in it – one of the holes will contain a large blue orb. Every puzzle you complete in this area will reward you with a blue orb, you need four of these to access the Icarus Wings. When you receive one of these orbs, place them in the same order as displayed on the wall.

Though you can tackle these puzzles in any order, we found it easier to make our way up the Observatory instead. Go back down the stairs to find a building with an orb stashed behind tall gates. Head to the right side of the building where there’s a golden crumbling wall. Hit this wall with your axe to break in, revealing the orb on top of a large metal box. Push the box towards the wall, creating just enough space for the orb to become accessible. 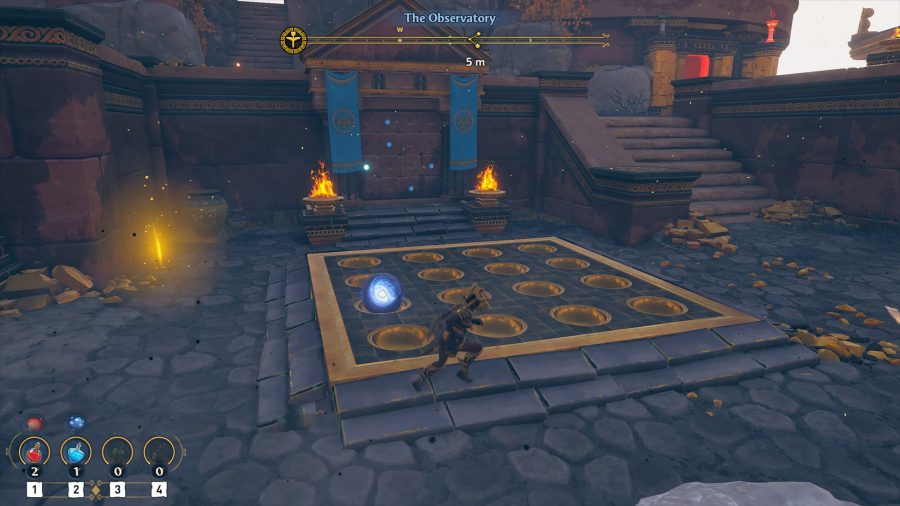 Head back up the stairs to place the orb in the square, then continue up the stairs and make your way to the right side of the building. You should find a pressure pad that activates one of two torches. While standing on the pad, shoot an arrow directly through the fire and into the unlit torch. This will open up the gate, revealing an orb. Take that down to the square and return to the stairs, this time heading left.

As you reach the top of the stairs, there’s a switch which simultaneously opens and closes two doors. Run beyond the closed door and head directly from the open room containing an orb. Don’t grab the orb just yet, you need it to solve another puzzle. If the orb stays exactly where it is, the door leading to a second orb will continue to stay open. Grab the second orb and place it in the same room as the first one. Now you can safely open the door and return both orbs to the square.

Dropping the final orb into the square allows you to collect the Icarus Wings, though you won’t have the ability to glide just yet. You have to complete the final quest in the area before you can use this ability. 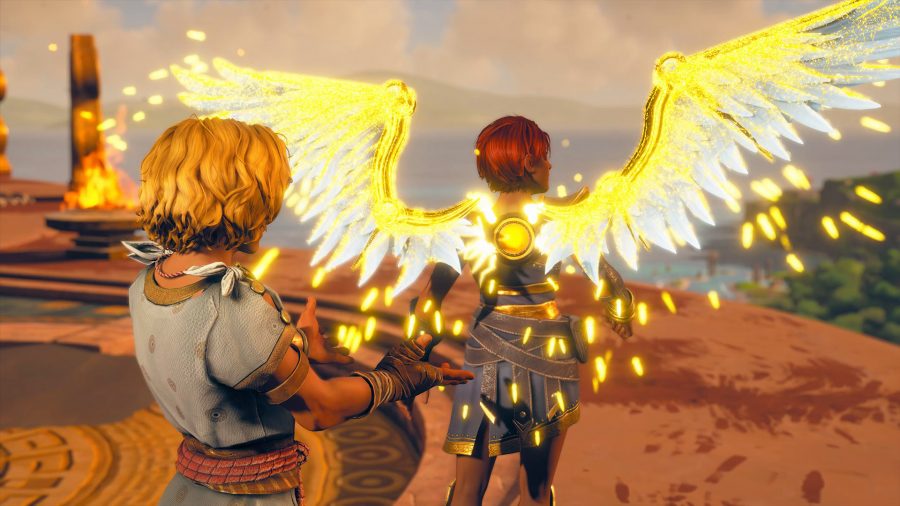 Go back up the stairs, this time go towards the middle set of stairs which leads to the highest point of the Observatory. From here, go around the building until you find another gold crumbling wall. Smash it open and stand on the pressure pad, revealing a blue flame guarded behind two gates. Shoot an Apollo Arrow through the blue flame and direct it towards the large torch located right outside the window.

A chest containing 45 Yellow Adamantine Shards, 62 Blue Adamantine Shards, and 40 Purple Adamantine Shards will appear just ahead of you. Climb to the platform where you lit the torch to find Hermes standing alone. Have a quick chat with Hermes to unlock your glide ability. This marks the end of the prologue, giving you full access to the rest of the island.

Looking for ways to improve Fenyx? Check out our stamina upgrades guide which will make climbing and swimming much easier in Immortals Fenyx Rising.