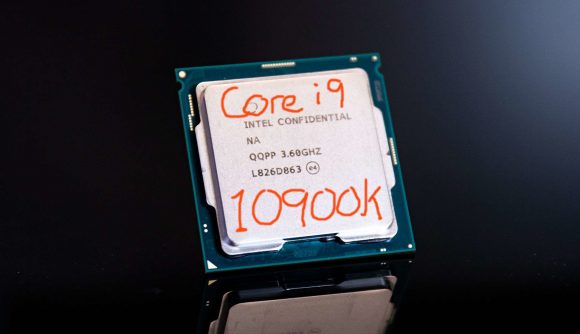 A new ten-core Intel Comet Lake development kit has appeared in the EEC database suggesting we’re getting a lot closer to a potential launch of a Ryzen-rivalling Intel processor than some might think. The suggestion has been that Comet Lake, the next step on Intel’s plus-ridden 14nm journey, wouldn’t arrive in our desktops until 2020 at the earliest. But with what looks like a hardware qualification kit in recent listings we could see a more mainstream Intel deca-core CPU this year.

That’s maybe not a huge surprise given Intel passim. The Core i9 9900K launched late last year as the vanguard of the Gen 9 processors, while we had to wait a while to see the full range launched later on. But with this ten-core chip – presumably the Core i9 10900K – going into qualification now that should mean Intel’s new top gaming processor is pretty much done and dusted.

The EEC listing references a Comet Lake-S 10 +2 processor, and the product code indicates that it is definitely, definitely a desktop CPU because of the DT prefix. The bracketed ‘Qual’ would point to this latest development kit featuring completed Comet Lake silicon for qualification with system integrators and motherboard manufacturers.

We saw a software development platform for the ten-core Comet Lake-S CPUs appear around six weeks ago, again via a Eurasian Economic Commision registration, which was listed as a ‘Beta’ kit.

This latest Comet Lake-S listing seems to feature finished silicon, and will be Intel’s great chip hope to combat all the processor positivity now surrounding AMD’s own multi-core CPUs. Intel’s very much playing catchup right now, with AMD having a 12-core Ryzen 9 3900X already in the market and a 16-core Ryzen 9 3950X on the way in September.

Quite what a likely $500 ten-core CPU will be able to deliver, on what is a known 14nm Skylake derivative architecture, is tough to tell. Intel is offering an IPC increase with its Sunny Cove cores, but they’re not due on the desktop for a good while yet. Maybe Intel will swallow the silicon bullet and start to drop its premium pricing model. After all, even though it will be the highest core-count processor Intel has created outside the HEDT game, a ten-core CPU is going to have a mighty tough time going up against a 16-core Ryzen.

But it looks like we won’t have long to wait to find out how tough, as we could be heading for an AMD Ryzen 9 3950X vs Intel Core i9 10900K head-to-head this autumn. Bring it on.