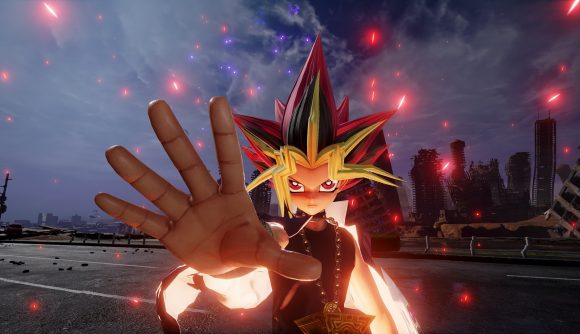 Jump Force, the upcoming 3v3 fighting game, is assembling its fighter lineup from across the 50-year run of Weekly Shonen Jump, a manga digest that has published popular series including One Piece, Bleach, and Naruto.

If like me, you missed out on the Yu-Gi-Oh! phenomenon when the property first appeared in Western markets, Yugi Muto is a teenager who gains superhuman powers after solving an ancient Egyptian puzzle. He’s possessed by the spirit of a pharaoh, with whom he forms a bond and becomes the ‘King of Games,’ particularly his favorite, Duel Monsters.

The series has been nothing short of a mega-hit over the last couple decades, and Jump Force’s roster is shaping up to be a crossover for the ages.

Bandai Namco revealed Yugi’s in-game look this week, which you can see above. He’ll be joining Bleach’s Shinigami, who were unveiled earlier this summer, and heroes like Naruto and the gang from Dragon Ball Z (who have already appeared in a fighting game this year).

Here’s the E3 Jump Force story trailer from earlier this year, for hints at the rest of the cast.


Jump Force will be leaping out of the page and onto the small glowing screen (via Steam) in 2019.