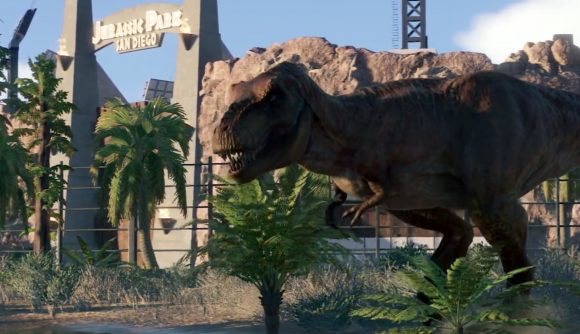 Dinosaur management sequel Jurassic World Evolution 2 is currently down for a release date of November and is steadily trickling out new information. Now the latest developer diary has shed light on the alternate Chaos Theory mode, which features “what if” scenarios from across the Jurassic Park franchise – such as if the villains of The Lost World won.

Jurassic World Evolution 2 already has a full story campaign – which developer Frontier is trying to make a more involved and less repetitive experience this time around – and a proper sandbox mode, much like the first game, but the sequel also features a new mode called ‘Chaos Theory’.

In Chaos Theory, “players will experience a what-if scenario from each of the Jurassic Park and Jurassic World movies,” according to executive producer Adam Woods in the latest dev diary (below). The example given is the San Diego branch of Jurassic Park, which fans of the series’ second movie The Lost World will recognise as the main villain’s plan – which was only stopped due to an act of sabotage by the heroes.

In this new mode, Frontier presents a scenario where the villains safely got off Isla Sorna with all their dinosaurs and rebuilt Jurassic Park as a Disney World-like show in San Diego. The scenario set on Jurassic World features the players going “face to face” with the terrifying Indominus Rex. We don’t know how that’ll work in a management strategy game, but it sounds exciting.

It looks like Jurassic World Evolution 2 will be a full overhaul of the first game, with dinosaurs finally able to hunt in packs, scientists getting a stronger focus, and tourists being a little less safe – as it should be. The game’s out on November 9 and it’s likely we’ll hear a lot more about it before then.