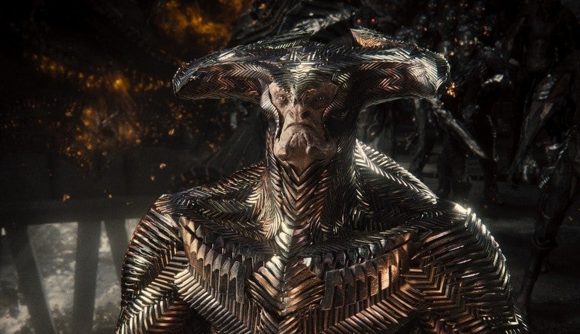 It appears Zack Snyder’s Justice League contains a small, incidental Halo reference. One of the characters, Deathstroke, has an emblem from the FPS games on his costume, in what seems to be a Google image mix-up.

It all starts with close-up images of Slade ‘Deathstroke’ Wilson’s costume from an exhibition dedicated to the movie. The original poster believed an emblem on Wilson’s sword was a reference to Ra’s Al Ghul, a recurring Batman villain who founds the League of Assassins. Joe Manganiello, who plays Wilson in Justice League, confirmed this belief as an Easter egg. The problem is, it’s not a League of Assassins symbol, it’s an edited version of the Runes multiplayer emblem from the Halo series.

How did this happen? Well, one theory involves a spot of fan-fiction. If you Google image search “Ra’s Al Ghul Symbol”, the custom Runes is the first result. A reverse image search on that picture leads back to Comics Crossroads, a fan-fiction database that hasn’t been updated since 2017. The author used a photoshopped Runes for their version of the League of Assassins, and had just the right keyword salad to get a decent spot on Google. It looks like whoever designed this part of Deathstroke’s costume may have used one of the first images they found, and there you go. It’s the comic book movie version of the butterfly effect – a fan-fiction writer photoshops something from Halo, half the internet away the picture becomes part of a blockbuster.

This has been gradually drawing more and more attention on Twitter. Christopher Barrett, former environment art director on the Halo games, currently art director for Destiny, shared it stating, “An emblem I made twenty years ago is on Deathstroke’s sword, I guess?”

An emblem I made twenty years ago is on Deathstroke’s sword I guess? pic.twitter.com/kbVKB5KrI5

Zack Snyder’s Justice League arrives on HBO Max in the United States on March 18. If this gives you a hankering for some classic Halo, the Master Chief Collection is on Steam, and here’s everything we know about the upcoming Halo Infinite.