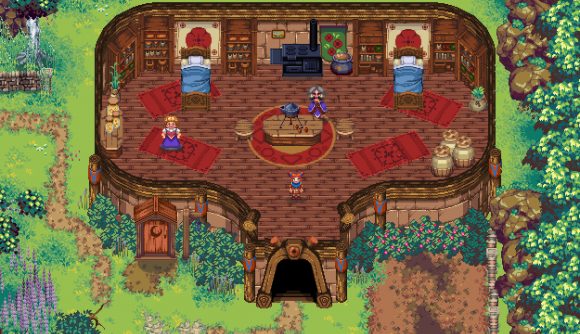 Kynseed is a very pretty-looking role-playing game about generations of people running a farm and protecting a very special family heirloom. While it’s clearly taking cues from games like Earthbound and Stardew Valley, Kynseed has its own unique identity that’s been forged by developers who are veterans of the Fable series. Now, it’s entering Steam’s early access program.

Kynseed charges you with protecting a magical acorn, and handing it along with everything you’ve learned down to your children. Characters in the game all eventually die – pets included – and as new generations grow up, their members will have to choose whether to carry on in their parents’ footsteps or strike out on their own.

There’s farming, adventuring, combat, and NPCs to forge relationships with. And being that the developers include several former Lionhead members, there’s sure to be an off-beat sense of physical humor included as well.

PixelCount Studios has provided Kickstarter backers with a series of beta builds as they’ve worked on the game, but now the developer is ready to share the game with a wider audience. Some planned features still haven’t made it into the build – the studio is still working on components like aging and working generations, and the plan is to expand the number of havens and game regions for the final build.


The art really is striking, even after a bevy of beautiful-looking pixel art games in the past several years. Kynseed manages to stand out visually, and that in itself makes it worth a look.

You can buy into early access for $9.99 over on Steam. PixelCount says it plans to gradually raise the price as the game gets closer to release, but Kynseed will be a one-time purchase – no add-ons or microtransactions.

According to the studio’s early access introduction, the tentative plan is to have Kynseed in early access for at least a year.

“Maybe longer depending on how many bathroom breaks we take,” they wrote.