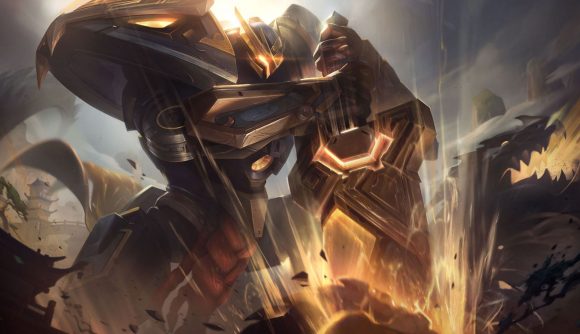 It’s a brand new year, and we all know what that means: Trying to keep up with resolutions, and a new season of League of Legends. Season 10 of League will start this week (today, in fact), so it’s time to get ready for a new round of placement matches when things get underway.

The official League of Legends Twitter account recently unveiled the news with a pair of images, the first showing a silhouette of spider-tank dreadnought Urgot, with chains ensnaring a hapless enemy at the end of a hall. “In 5 days, we break them,” the image text reads ominously. The second image reveals the date of the beginning of the season, January 10.

As Dot Esports reports, Season 10 will begin with a soft reset for ranked. Players will again get a provisional rank placement after their first ranked game of the season. After that, your rank will be calculated based not only on your performance in the rest of your placement matches, but also based on how well you’ve played during the Season 10 preseason period.

It’s already clear that the LoL 2020 season will see some big shake ups and changes to the game, with League of Legends patch 10.1 bringing brand new Juggernaut Sett, plenty of Champion and item changes, and a load of new skins to the game. Plus, League of Legends patch 10.2, currently in for testing on the PBE, will add the long-anticipated Wukong rework. Check the notes out to find out more.

If you’re keen for a refresh on how it works ahead of season 10’s arrival, our sister site The Loadout has a guide to the League of Legends ranking system which you might find handy, and we can help you find the best LoL Champions for beginners if you’re new to the game and want to jump in now a new season is upon us.

There’s also a new League of Legends season 10 cinematic this year which is pretty epic. It’s called ‘Warriors’ and is set to a cover of Riot and Imagine Dragons’ song of the same name, featuring artists 2WEI and Edda Hayes.