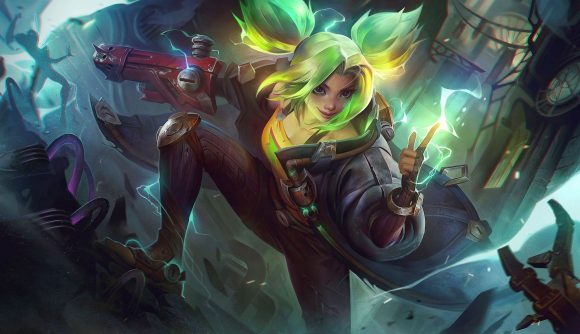 League of Legends patch 12.2 is now taking its turn on the MOBA game’s testing servers ahead of its live debut in a fortnight, and it seems we’ve got a brand-new champion on the way. Yesterday, Riot Games unveiled Zeri, a marksman from Zaun who wields a “custom-crafted gun” charged with “electric magic”, on the game’s universe and biography web pages. It seems she might have appeared a little early, as the info’s now been taken down, but we’ve got a good idea of what she’ll bring from the details offered when the pages were live.

While there are no abilities to check out just yet, it sounds from her description like Zeri, The Spark of Zaun, will be something of a sprightly ADC who boasts rapid, quickfire movement along with this electric element. “A headstrong, spirited young woman from Zaun’s working-class, Zeri channels her electric magic to charge herself and her custom-crafted gun,” her short bio reads, as captured by Surrenderat20 (you can also check out her longer backstory there).

“Her volatile power mirrors her emotions, its sparks reflecting her lightning-fast approach to life. Deeply compassionate toward others, Zeri carries the love of her family and her home into every fight. Though her eagerness to help can sometimes backfire, Zeri believes one truth to be certain: stand up for your community, and it will stand up with you.”

While we don’t yet have an idea of exactly how these elements will fit into her ability kit, the description conjures a sense of how she’ll play. It also seems that she’s related in some way to Ekko, as per her champion page, so perhaps we could see some exciting lore develop over time between these two champs.

It’s not confirmed yet when Zeri will arrive, but it looks most likely that she’ll debut along with League of Legends patch 12.2, which is due to go live on go live on January 19, according to the League of Legends 2022 patch schedule. We’ll probably see her hit the PBE in the coming days, though, ready to take her turn on the testing severs before she comes to the live game.

For now, you can check out our best League of Legends champions for beginners and LoL beginners’ guides to help you get started if you’re new to the game, or our sister site The Loadout’s LoL ranks explainer if you’re after some tips on how to climb those tiers.