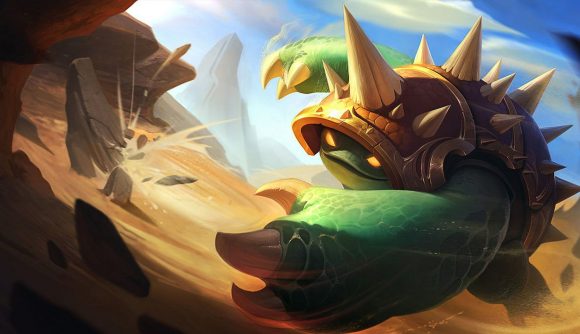 League of Legends champion Rammus is in for a batch of tweaks in the not-too-distant future. Gameplay design director Mark ‘Riot Scruffy’ Yetter has posted a new rundown of some gameplay thoughts the team has over The Armordillo, so we’ve got an idea of the changes headed his way soon.

Yetter explains that, with Rammus on the way to League’s sister mobile multiplayer game Wild Rift, the two MOBA games’ respective dev teams have collaborated to “upgrade the parts of his gameplay that had aged the most while keeping his iconic speedy core intact”. While the teams are keen to keep the two versions of Rammus “as similar as possible”, there are some changes specific to PC League that the gameplay team is keen to introduce in order to “keep his core play pattern intact but upgrade some of the spells (like R) that are most under-delivering”.

The team’s goals with these changes are multi-faceted. The dev explains aims for an increased number gameplay options for the champ, giving Rammus players “a distinctive high-point that properly reflects his high-speed fantasy”, making him power-neutral, and improvements to VFX and SFX clarity and satisfaction.

The early-look changelist for the champ is as follows (via Riot Games), though it’s worth noting that these are just gameplay thoughts – as such, they’re not set in stone, so may change or not hit the game in the end, depending on various factors.

It’s not clear when “soon” might be for these changes, but you can keep an eye on the League of Legends 2021 patch schedule if you’re keen to see when gameplay updates are due over the rest of the year. We also have a rundown of the tentative League of Legends patch 11.2 notes if you’re curious about what’s headed to the multiplayer game this very week.