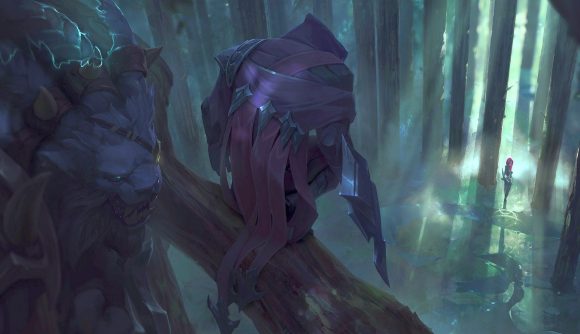 As highlighted in the LoL patch 10.16 notes, something intriguing has just hit the League of Legends Public Beta Environment. A mysterious new emote has appeared, and while it’s far from clear what it is or what it’s for, it’s seemingly to tied to an even bigger mystery: someone or something called ‘Samira’.

As spotted by Moobeat, who runs League of Legends fansite Surrenderat20, a new emote has appeared on the MOBA game’s PBE, whose icon looks like an artistic abstraction of a rose, with a shiny silver ‘S’ in the foreground. According to Moobeat there’s no information on what the ‘Style: Rank S’ emote’s for, but it is linked to a batch of ‘easter egg’ files that have also popped up. As you can see below, in the preview images of these files we can see different parts of the emote’s icon, alongside various references to things like ‘energy ray’, ‘rose’, ‘petals’, flames’, and ‘shimmer’ – all of which also reference ‘Samira’. Hmm.

While it’s far from any confirmation of sorts, it’s possible this could be a very early reference to another League Champ on the way at some point.

In its most recent Champion roadmap, developer Riot Games teased that, alongside a “dreamy jungler” and a “masked assassin” – who turned out to be the two just-debuted Champs, Lillia and Yone, respectively – there’s a “thrill-seeking marksman” on the horizon, too. There are no details for this character yet, but they’re described as “dressed to slay” and are “coming later this year”.

Plus, Riot asked at the time: “Do you like to laugh in the face of danger? Do you enjoy stringing together abilities, creating stylish new combos? Does the idea of diving straight into the fray, firing a whirlwind of blades and bullets, then hopping back out with a sliver of health excite you?”, explaining if players have responded ‘yes’ to any of the above, “we may be releasing just the champion for you”.

In addition, the studio hinted at “two of the other new champs in development” – a “sensational mage and an ultra-heavy tank support” – which it’ll discuss in a later roadmap.

Notably, some easter egg files were found referencing “Samira” and match the assets used for this icon pic.twitter.com/wbwjC0GMf9

There’s nothing remotely solid to connect the mysterious references to a ‘Samira’ to any of these upcoming Champs, but it’s worth noting that some of the early signs Yone was on the way was through easily overlooked PBE Thresh VO files that popped up and referenced him. So, it’s worth keeping a weather eye out for more morsels of information on Samira – it could be our first glimpse of an incoming Champ.