Riot is looking to shake up Legends of Runeterra’s meta in a big way with its latest expansion, Empires of the Ascended. Travelling to Shurima, the fallen desert empire, players are able to call upon the mystical powers of the region’s ancient champions to dominate in battle. Featuring 110 new collectible cards, nine new champions, and three keywords, the Empire of the Ascended set promises to raise the overall power level by introducing some of the strongest cards ever seen in Runeterra.

The empire of Shurima is an interesting faction to bring to Riot’s card game because it has the potential to operate independently and without compromise. While decks have focused on one region in the past, some of the cards in the new set come with the added deck building challenge of becoming more powerful when they’re used alongside other Shuriman cards. Noah Selzer, final design team lead at Riot, explains this was a key goal from the start. “We haven’t had a strong mono region deck for quite a while,” says Selzer. “Just to give the game some texture, we really did want to try to make an exciting mono deck.”

If you want to go for a pure Shuriman deck then Buried Sun Disc is the perfect Landmark card to build around, and demonstrates why the new Countdown keyword is worth the wait – pun intended. Countdown cards have an effect that triggers after a set amount of turns, and Buried Sun Disc features Runeterra’s longest Countdown timer, taking a whopping 25 turns to trigger, but for good reason. A Restored Sun Disc will draw one of each Ascendant card from your deck. These cards start at level one, but when you level them up they bypass their second level entirely and skip straight to level three.

These Ascended champions are powerful enough to make a difference on their own. Renekton, for example, starts as a four mana 4/4 with Overwhelm, but a Restored Sun Disc transforms Renekton into a 10/10 champion after you level him up just once. Nasus becomes stronger during a match, gaining 1+/1+ for each unit slain during the course of the game. Using this deck, my Nasus hits the ground running as a six mana 10/10, putting it in the perfect position to instantly level up after its first attack. 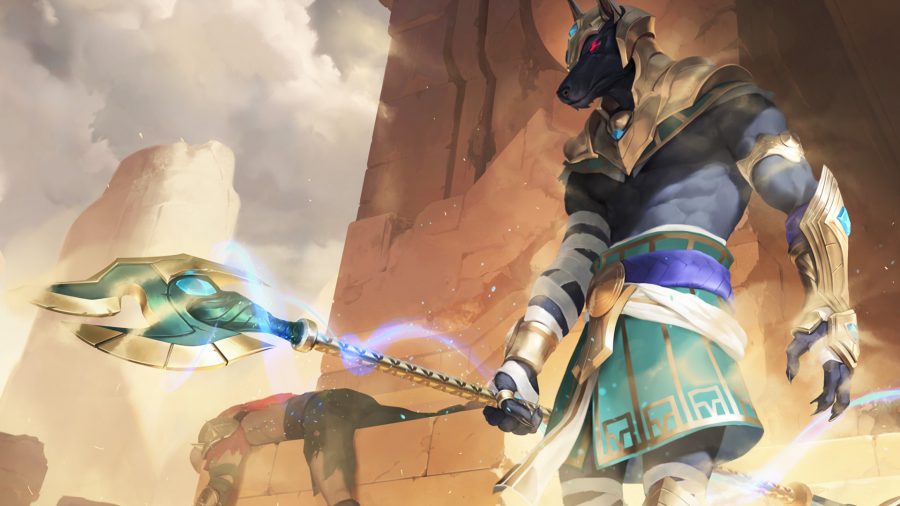 Unless your opponent has removal options that can specifically target these cards, they can become very sticky minions that can overwhelm the board and quickly dominate the game. Of course, players can react by including more Landmark removal cards in their deck, and Sun Disc users can counter that by including a copy of Taliyah, a new champion who instantly summons an exact copy of an allied Landmark.

This is a lot of power to inject into the game all at once, but Selzer knows this approach can be risky. “Shurima cards are going to be pretty common for a bit,” Selzer explains, “and so what you look at when deciding if a card is good changes, too. Hopefully, it gives the game a slightly different texture”. As time goes on, the devs will introduce new cards to fight back against this. If the power level of this new set is completely out of line, Riot is keeping an eye on things and will adjust the cards if needed.

There’s plenty of room to experiment with Shuriman cards, and if you want to build a deck that focuses on Landmarks then the Freljord and Shurima regions synergise well together. For example, the Frozen Thrall is a new Freljord Countdown Landmark – after eight turns, Frozen Thrall summons an 8/8 Frostguard Thrall with Overwhelm. This type of deck gives you the flexibility to make important decisions as the match progresses. You could wait for the Countdown timer to reach zero to receive your powerful ally. You may want to speed the timer up by playing Draklorn Inquisitor, which reduces the Countdown timer of all Frozen Thralls from four to zero. Alternatively, you can opt for Desert Naturalist to immediately gain a 5/4 Grumpy Rockbear in exchange for the Landmark. 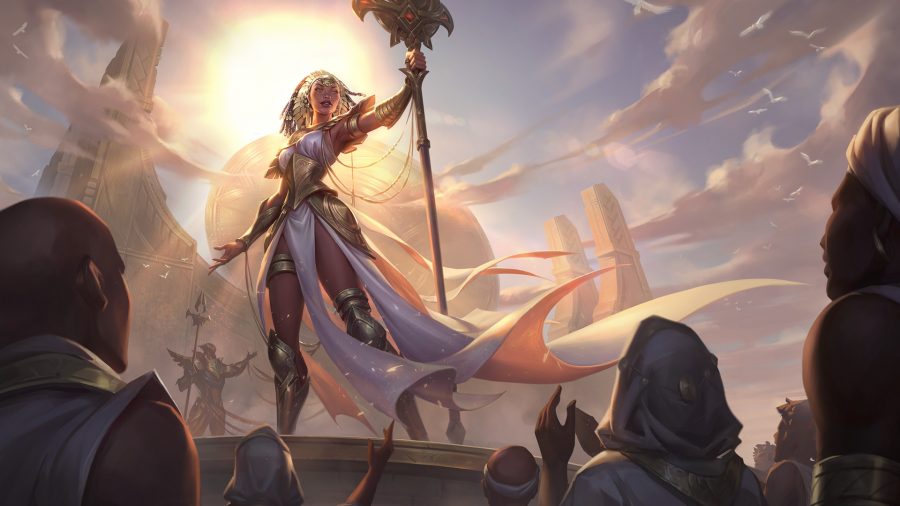 If you prefer aggressive decks, the new Reputation keyword rewards dealing large amounts of damage by reducing the cost of associated cards. Specifically, if your allies have struck for over five damage at least four times this game then the Reputation effect will activate, allowing you to play cards like the 6/3 Callous Bonecrusher for just two mana. This isn’t exclusive to minions either – the Inner Sanctum Landmark drops from three mana to zero, giving you access to its powerful buffs for free.

Praying for the perfect topdeck isn’t a strategy you can ever rely on, but the final new keyword in Empires of the Ascended, Predict, gives you the opportunity to find exactly what you need. This might remind you of Hearthstone’s Discover keyword, mixed with Slay The Spire’s Scry mechanic. You choose between three cards in your deck, shuffle the remaining cards, and place the one you chose on top. The best case scenario can result in you drawing the perfect card to finish off a game, but RNG also occasionally forces you to pick between three bad options.

Let’s be honest, playing digital card games can be a lonely hobby, but it doesn’t have to be. Alongside the new expansion, Riot is launching an experimental 2v2 mode in Labs, which challenges a pair to manage their resources as they take on an opposing pair. Each player goes into this mode with pre-built faction-specific decks and are then assigned an attacking or defending role. 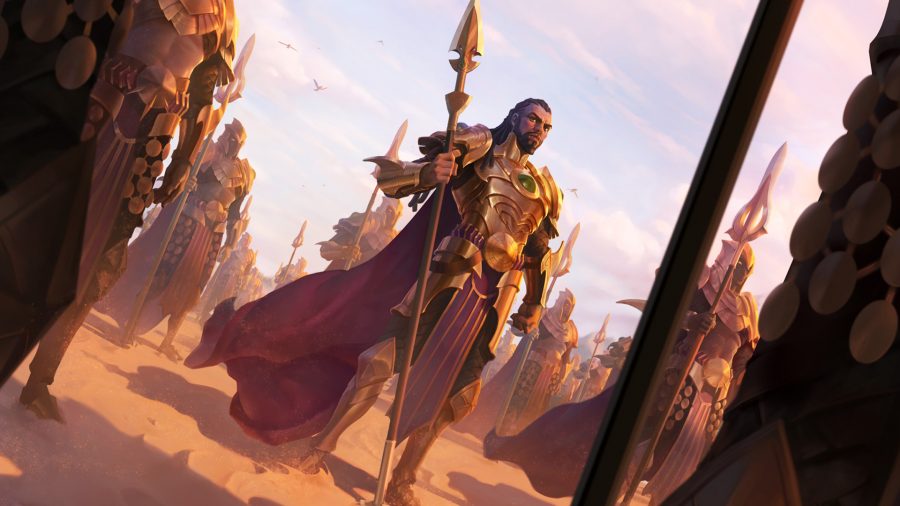 Unfortunately, this mode wasn’t available when I had a chance to try out the new cards, but this definitely feels like a step in the right direction for Runeterra. 2v2 modes are always difficult to balance, but the use of pre-built decks should help to reduce the number of broken synergies right off the bat. Judging by Riot’s own trailer, it looks like communication may be difficult between random players as you only have a small set of emotes to rely on. If you can jump into a match with your friends then co-op play is a refreshing alternative and something I’d like to see more card battlers attempt.

The whole point of Empires of the Ascended expansion is to see the city of Shurima rise again after thousands of years in ruin. This pantheon of Egyptian-inspired gods threaten to go a few steps further, potentially tearing the current meta apart in the process.

Empires of the Ascended is set to launch on March 3 with patch 2.3.0.