‘Definitive Edition’ is a curious, fluid term. It’s been applied to everything from a game bundled with DLC, a slap of fresh paint, and a handful of tweaks, to a “built-from-the-ground-up” overhaul – like Mafia: Definitive Edition. It’s a remake, effectively, and it walks the same tightrope: how do you preserve the spirit of an 18-year-old title in a modern gaming experience? At what point is a game’s DNA so altered that it becomes a new thing entirely? Mafia: DE not only walks that rope with barely a wobble, it nails a few pirouettes along the way.

It’s clear we’re on 2002 Mafia’s turf from the get-go. The same orchestral theme greets me like an old amica and the scene’s set with protagonist Tommy Angelo making jaded cop Detective Norman an offer he can’t refuse. The diner booth, the exchange of verbal ripostes – heck! – right down to the cup o’ Joe – it’s the same but just… better. Well-written and acted. Graphically gorgeous.

In the cinematics, at least – of which there are a lot – Mafia: DE is almost wholly faithful to the original. There’s a nice touch early on with a near frame-for-frame replica of an original cutscene.

Tommy unknowingly tangles with the Salieri gang, gets two of its mafiosi out of a scrape, and earns a wad of gratitude-flavoured greens from its head honcho – but at first he thinks there are two in the head coming his way. The moment is just as funny as I remember, and it’s charming to see that kind of thing recreated with such care and attention as in the DE; it draws a direct line between the old and new. You can see side-by-side comparison videos in the making. 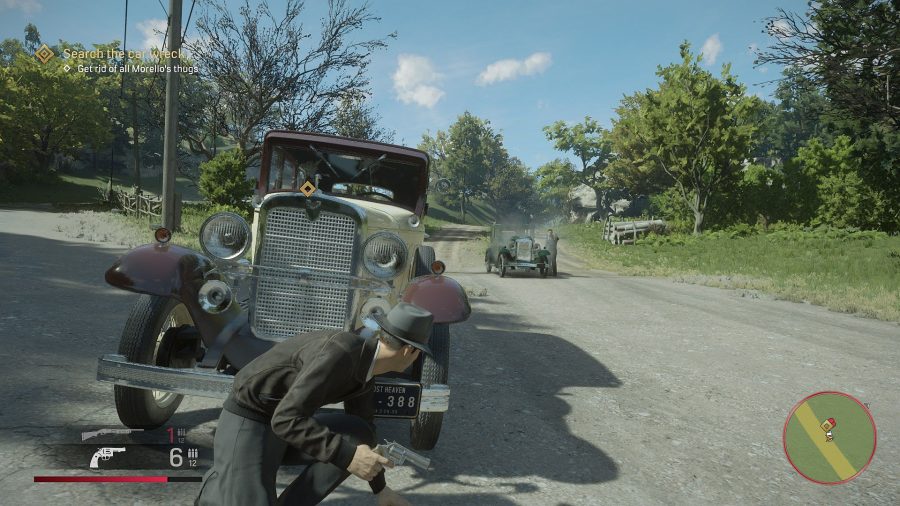 As for gameplay, the game adopts many of Mafia III’s underlying mechanics, and while manoeuvering Tommy feels a teeny bit clunky at times compared to some other modern action-adventure games, the many set pieces are pretty magical. You can tune aim assist, depending on your preferences (I went for ‘low’, which added some light-touch guidance; FPS games fans can switch it off entirely). Whatever you pick, the over-the-shoulder third-person combat is punchy and meaty in all the right ways.

There’s a range of guns, and you can carry two at a time: a handgun, and a rifle or shotgun. The bolt-action rifle and double-barrelled shotgun are particularly lively – shots are slightly harder to land due to their less pronounced reticle, but there’s a gutsy pump that channels through my mouse when I score a hit on a Morello goon’s noggin.

As an ex-cabbie, Tommy’s role in the Salieri clan is the ‘wheel man’. He knows the city of Lost Heaven better than his wife’s face, and can steer, skid, and skitter around its tram track-puckered streets better than anyone else. Alongside gunfights, white-knuckle getaway drives are where Mafia: DE shines, though you might spend a chunk of your early time behind the wheel red-faced after a verbal sandblasting from your mafioso buddies for screwing up. 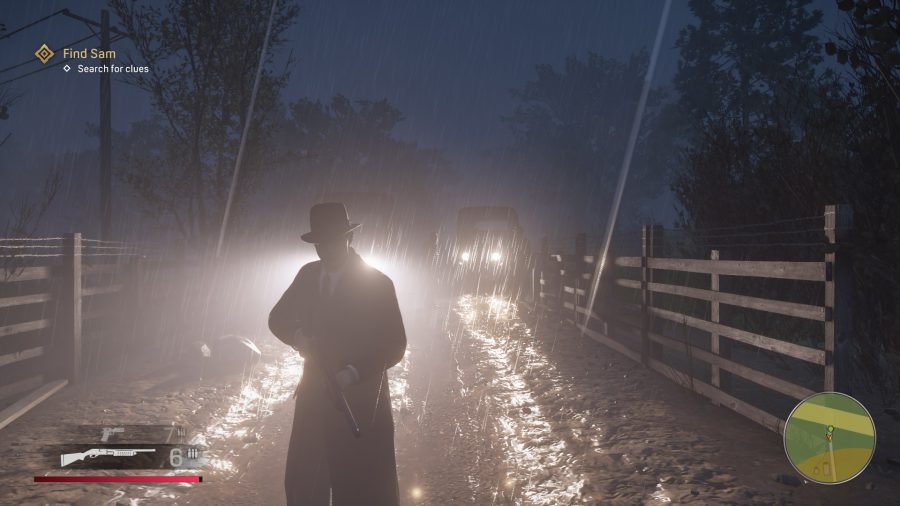 While the DE obviously improves on the original’s vehicle handling enormously, it’s still a bit of a cumbersome experience at times depending on your set of wheels. Think less GTA V, more LA Noire. Finding a corner’s sweet spot without oversteering or veering into a wall takes practice, too, and every mistake can deal one hell of a blow to your getaway. Nick a steel pillar or parked car at high speed and you’re brought to a deadening stop. Reversing, correcting, moving off – it’s a bit like forcing treacle through a blender. You’ll power through, but it’ll take a hot minute.

I'm not here to play Forza; I don't expect those glorious, boxy jalopies to sing like a Bugatti

The thing is, though, I don’t mind it at all. I’m not here to play Forza; I don’t expect those glorious, boxy jalopies to sing like a Bugatti. I like the immersion-challenge combo the handling adds to a game set in the 1930s. And the classic cars themselves, which you can collect and ogle in your Carcyclopedia, are lovely things to behold.

Speaking of driving, I’d be remiss not to discuss that car racing mission as (re)imagined by Hangar 13. Those who played – or probably screamed, threw their controller at a wall, and rage quit – it first time around will recall it well. Called ‘Fairplay’ (oh, the irony), the level put you in a bullet-shaped motor to tackle a Grand Prix so infamously tricky it made me want to pull my teeth out with a pair of pliers and throw them at my TV. Thankfully, the DE’s race is not like that at all. 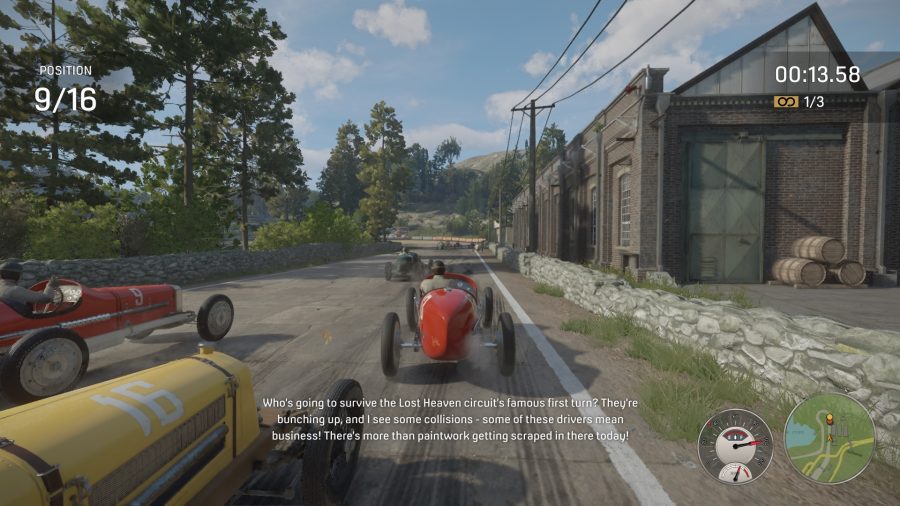 The race car – which you get to test drive on Lost Heaven’s midnight streets beforehand – is slipperier than a politician in a Q&A to handle, but it’s mighty. Belting around the track feels smooth if you prepare for its bends, and I beat it on my third attempt. It’s challenging but not intractably so, and plenty enjoyable.

Mafia: DE exults in the feel of playing through a vintage mob movie

All the trope-heavy mafia beats are in the DE, too. Sequences where Tommy’s decked out in fedora and coat, rattling an aptly named tommy gun at smarmy Morello boys, are just great, classic fun right outta the movies. As is getting in on Salieri’s illicit booze, cigar, and business ‘protection’ rackets, window dressed as gentlemanly transactions. Probably more so than its sequels, Mafia: DE exults in the feel of playing through a vintage mob movie.

Having played – and relished, at the time – the original, it’s difficult to judge with the same degree of confidence what newcomers will get out of the DE, however. Visually and mechanically, it’s transformed. Under the hood, the nuts and bolts are the same. Despite having an open world, it’s not like many modern open-world games: the linear mission structure remains and there’s little in Lost Heaven to tempt me away from completing each as and when they’re offered. I seldom deviate from the objectives permanently tagged in the corner of the UI. 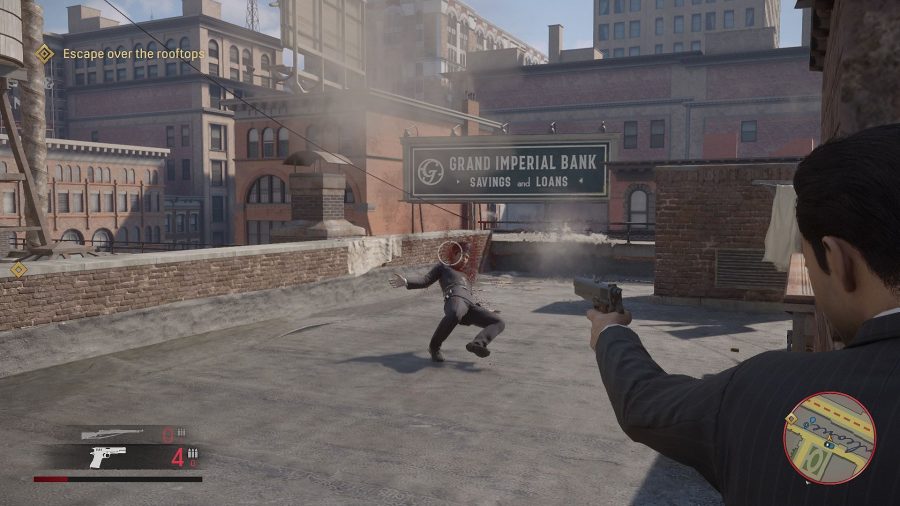 Those missions follow the formula of the DE’s antiquated forebear: drive here, do this thing, shoot those bad guys, escape. There are stealth sequences. There are scene investigations. There are many gunfights with a simple knack to them: find cover, peep and fire when foes reload, duck, and repeat.

There's little in the way of surprise in the mix, and it needs to be enjoyed as a Definitive Edition of an old game, not a modern one

It’s fun, and often exciting, but it’s comfortable. There’s little in the way of surprise in the mix, and it needs to be enjoyed as a Definitive Edition of an old game, not a modern one. The ‘free ride’ mode is a nice addition that lets you explore Lost Heaven at your leisure, with some collectibles to scoop and side-tasks to tackle, but there’s not a huge amount of extra content. I was curious to see the city’s overhaul up close, and it really does look the part of a Chicago-esque, prohibition era city, but newcomers might not get as much out of exploring it as they would a modern open-world game, simply because there’s not much to see.

For fans of the first game, however, it’s got that extra dimension. As I’m pootling around Central Island, I tilt the camera up to enjoy the sights in high definition. It’s obviously wildly different, and I struggle for a second to make the connection between what I see and what I remember. But then a tune croaks from my ride’s radio and I’m hurtled back into memories of driving these streets as a kid. I’m pretty sure it’s a ditty from the original, and the warm punch of nostalgia hits me hard in the feels. It’s clear Hangar 13 has worked hard to capture the essence of Illusion Softworks’ vision, and the result delivers. 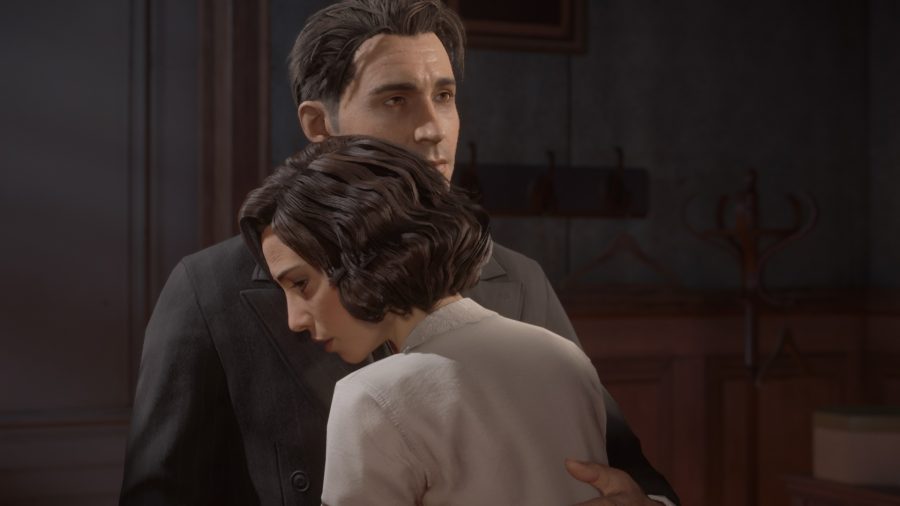 Character development has taken a step but not a leap. In a recent interview, lead producer Devin Hitch told us the studio was fleshing out the secondary characters’ roles, “paint[ing] some ambiguity in their motivations”, and this much is apparent. You care more about Tommy and his partner Sarah, his buddies Paulie and Sam, and even the gang’s rag-tag members. But I think this could have gone a little further; Tommy still feels at an arm’s length to some degree.

The crime game’s not long (I completed the main campaign comfortably in around 16 hours), and its vignette-like story means you only get snapshots of the mobster’s life over a series of years, so there’s not a lot of space or time to get properly acquainted. But, with some players calling for shorter, more focused offerings in reaction to the daunting scale of many recent open-world games, Mafia: DE is kind of a balm. It’s refreshing to return to the genre’s nascence, to follow missions laid out before you, and just enjoy it for what it is: a great story you play through, with enough sizzle to be satisfying.

With a gorgeous graphical overhaul and smoother gameplay, Hangar 13 delivers what a remake should. Just don't expect as much content as a modern open-world game.