When I sat down to play Magic: Legends at PAX East on Friday morning, I had an idea of what to expect – a new iteration on Magic: The Gathering, the granddaddy of trading card games. Imagine my surprise, then, when I found myself peering at a screen that looked more like Diablo or Torchlight: here was the isometric perspective, the centred hero character, and the abilities-based real-time combat. And yet underneath all this, Legends is, fundamentally, a Magic: The Gathering game.

I had to ease my way into that realisation with the help of Magic: Legends executive producer Stephen Ricossa, who explained what was going on as I first ventured through the demo as a red-aligned Geomancer.

I have some monk-like kicks and punches on the right trigger and bumper. These are sufficient to handle the first couple of shambling zombies that lumber toward me in the festering bog where I begin, but as their numbers steadily increase, Ricossa recommends I use Pyroclasm.

In Magic: The Gathering, Pyroclasm is a two-mana red card that deals two damage to all creatures. When I fire it off with a tap of the ‘X’ button, those shambling zombies are pulled towards me like I’m an undead magnet, and then blown up in a fiery meteor blast. Having cast it, Pyroclasm is replaced on the X button with a new spell drawn from a deck – one that’s been pre-constructed for the expo demo, but which players will be able to tinker with themselves when Magic: Legends launches on PC later this year. 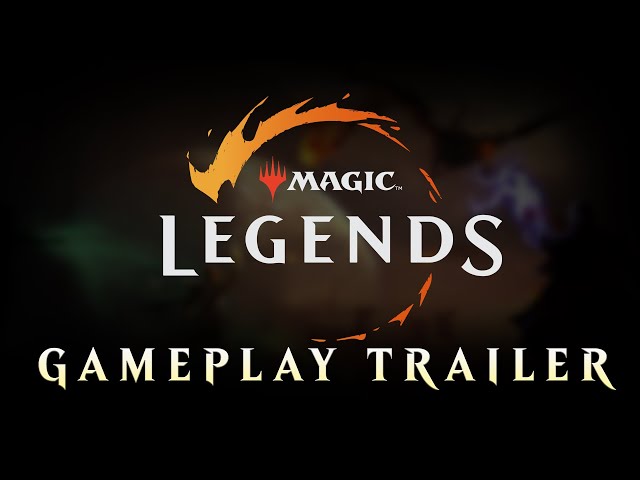 This constant shuffle of spells, pulled from your deck and into the ‘hand’ represented by the face buttons if you’re using a controller, is the major element that sets Legends apart from other Diablo-style games – and which marks it indelibly as a Magic game, too. One effect of this is that your control scheme is dynamic: ‘X’ doesn’t have a set function, it just casts whichever spell you’ve pulled into that slot.

Wizards is fairly precious with its crown jewel. We only got this because our CEO worked there for ten years

My fire-flinging Geomancer and I make our way through the fens and bogs of the demo, which culminates in a showdown with Josu Vess, a lich knight and legendary creature drawn from the card game. As the spells appear on my face buttons, I summon an earth elemental to draw aggro from Josu while managing his adds with a lava vortex and an earth strike. Magic effects are popping off all over the screen, and Ricossa informs me that each one of them is a card you can collect and use in your Legends deck.

I play through the demo again as a blue-aligned Mind Mage, and this time my spells demand a significantly different playstyle. Rather than plowing forward and setting everything on fire, as a Mind Mage I hang back from the fray, summoning creatures and casting spells to stun or slow enemies, or sometimes bring them under my control. The final fight with Josu is a more considered affair, as I mind-control a necromancer who begins healing my summons, who have the lich surrounded. 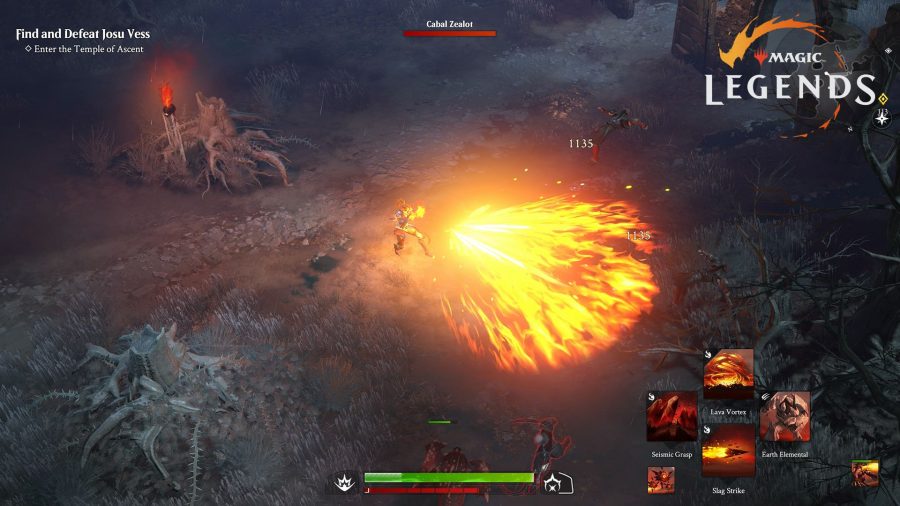 Throughout my three demo runs, I’m playing an action-RPG, but I’m also using a constantly cycling hand of arcana that don’t just share the names of real Magic: The Gathering cards, but which actually work the same way as the cards, too. Even the language of the card game is preserved in Legends: Giant Growth, which adds a temporary +3/+3 buff to a target, works exactly the same way here. The difference is this time you can actually see your Enormous Baloth inflate with power as it chomps on enemy archers. And thanks to some complicated maths under the hood, Ricossa says, the stat buffs are effectively identical to the language found on the physical card.

For more epic quests: see the best RPGs on PC

It’s hard to overstate the impact these cards make when summoned into the game. As a green Beastcaller I was able to summon a trampling herd of magical boars with Stampede or a swarm of Saproling dryads. Chaotic Growth manifests as a wrecking ball of twisted tree limbs and foliage that plows through approaching enemies. In this run, I’m liberating a dragon who has placed himself under house arrest after being accused of a crime he didn’t commit, and the stage culminates with a multi-part boss fight that has me firing off green spells as fast as I can ready them. 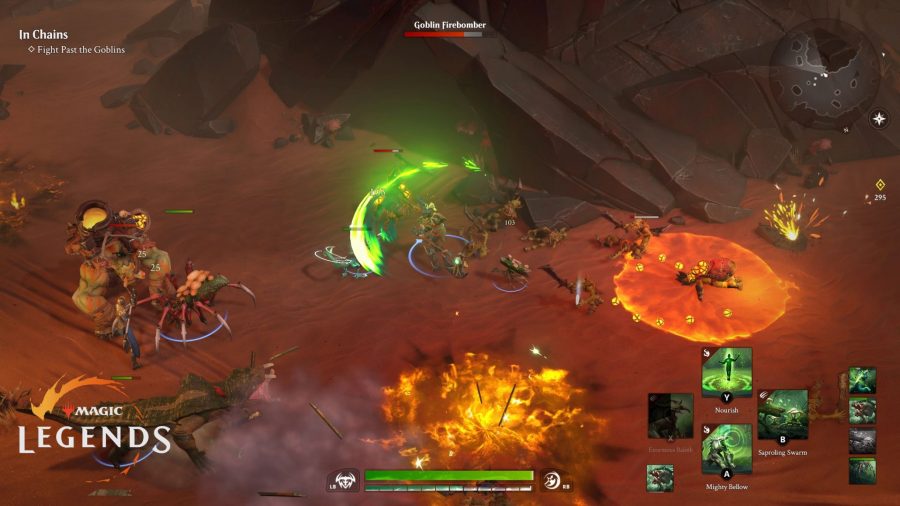 As soon as I had some familiarity with my decks, I found myself holding on to certain spells as I drew them, waiting for an opportunity to use them in a combo. These can be devastating in the right hands, and Ricossa says with some skill and a lucky card draw, a green planeswalker can halve the health of many of the game’s bosses in a single play. But getting there takes planning, good luck, and the ability to hold back until the perfect moment.

You could have a black-green deck with the Geomancer, if you want. It's all about pairing the class with the spells

While I didn’t get a chance to experiment with deck-building at PAX, Ricossa says players aren’t bound to a single colour. You can mix and match to your heart’s content, even building completely unworkable decks, such as one comprised entirely of enchantments. My red Geomancer, for instance, had no true healing spells in her deck – the closest she could manage was to summon a shell of molten rock which blows up anything that gets too close – but Ricossa says this is only one way to play the class.

“You could go red-white, and bring your heals in that way,” Ricossa explains. “And you don’t have to be a Geomancer to have red spells. You could have a black-green deck with your Geomancer, if that’s what you want. It’s your pairing of the class with the spells.” 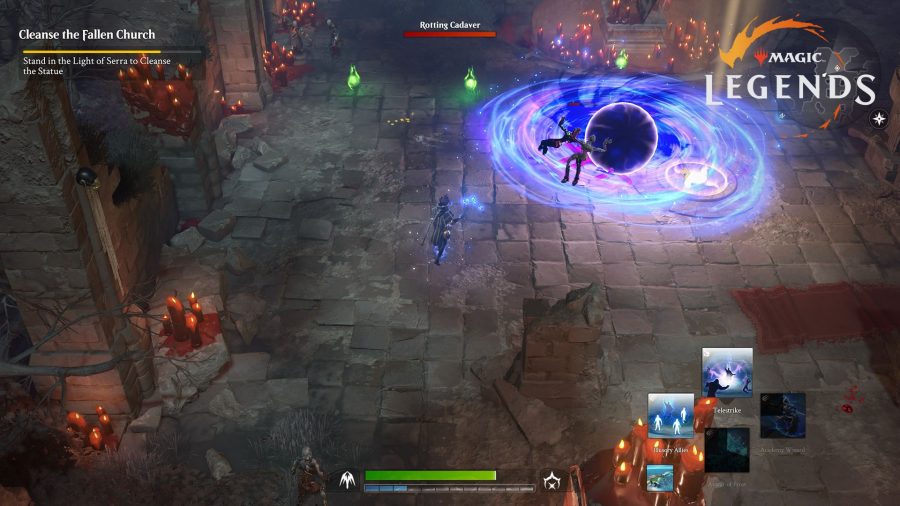 After about half an hour’s time in the game, I was impressed: I liked the crunchy dungeon-crawling combat, I liked the speed, and I really liked the recontextualisation of Magic: The Gathering’s core mechanics into a completely novel yet very familiar setting. And so my question was, why has it taken this long for a game like this to happen? Why haven’t we seen other interpretations of Magic in videogames?

“I’ll be frank,” Ricossa replies. “Wizards [of the Coast] is fairly precious with its crown jewel. The only reason that we got this is because our CEO [Stephen D’Angelo] worked for Wizards for ten years. We have two guys on our design team that designed paper Magic for ten years, too […] So, we kind of have a pedigree that [Wizards of the Coast] was like, alright, let’s give it a shot.” 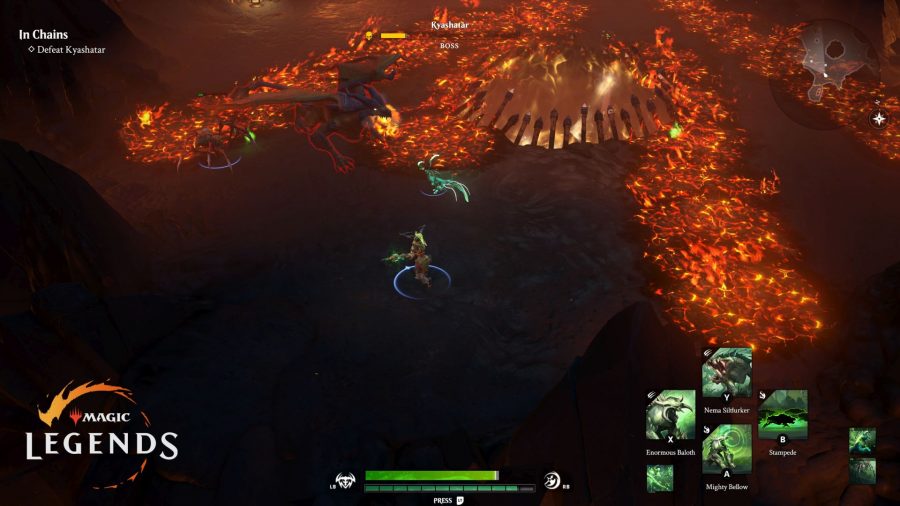 Following my preview, I had two outstanding questions about Magic: Legends. The first is how well players will respond to the ‘hand of cards’ mechanic for real-time ability use, but that’s something that can easily be overcome with some practice and familiarity. Ricossa explains that Legends teaches players each card in the deck as it doles them out, and while the new input concept felt chaotic to me in my first half hour with the game, it wasn’t a barrier to my progress through the levels.

The best price is nothing: check out the best free PC games

The second question concerns the business model. Magic: Legends is going to be a free-to-play game, and developer Cryptic Studios isn’t ready to discuss monetisation just yet. However, Cryptic’s past free-to-play MMOs, which include Star Trek Online and Neverwinter, may provide some insight into how Magic: Legends will approach the business side of the game.

However that shapes up, Magic: Legends is an exciting and fresh take on the card table classic – a chance to ‘see’ the action it represents in a refreshingly dynamic new style.