Looking for a list of the best hacking games on PC? Game developers have long valued the ‘hacker ethic’ — the will and skill to grab a game by the scruff of its code, rip it apart, and put the pieces together in a new way.

Id Software prioritized the nascent modding community when they were creating Doom, Valve courted it from Half-Life onward and the entirety of the MOBA genre stems from folks futzing with Warcraft III.

Of course, most players are just that: players. We see numbers and letters in a line of code; not meaning. But, there’s a lineage of games that have sought to deliver the fantasy of being in complete command of a computer’s functions; of using that control to wreak destruction, or to avert it. Some of these games present a simulation of hacking, with the player inputting real lines of code. Others, though, abstract hacking to the point that it becomes a magical ability you can use with the press of a button. We like both, and you’ll find both represented in our hacking games list below.

The best hacking games on PC are: 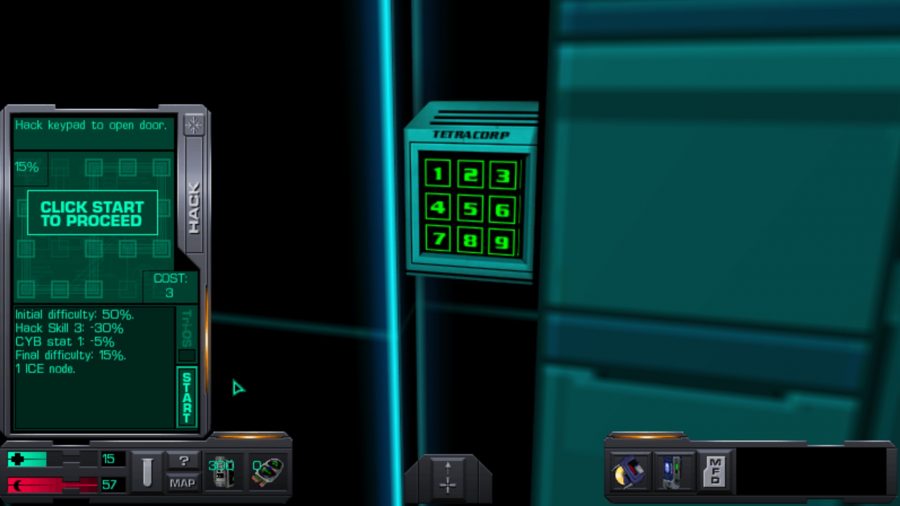 The hacking minigame in System Shock 2 is nothing special. Basically, you play a simplified game of Minesweeper where you’re required to link three mines in a row for a successful hack. It’s pretty basic. As far as abstracted versions of hacking go, I much prefer the weird pipe puzzles of BioShock, its spiritual successor. But, System Shock 2 is notable for its implementation of hacking as one of multiple skill trees that the player could pursue. While the player was cast as a hacker in the original System Shock, they had the toolset to roleplay a hacker in its sequel.

Many sci-fi RPGS released after System Shock 2 have followed in its footsteps — especially those with an immersive hacking simulator bent — offering hacking abilities as one route to accomplish a goal. None present hacking realistically; you’re not entering lines of code (and NieR: Automata abstracted the process to the point that it became a twin stick shooter). But, if you enjoy avoiding fights and rigging turrets to take out enemies, you have System Shock 2 to thank. 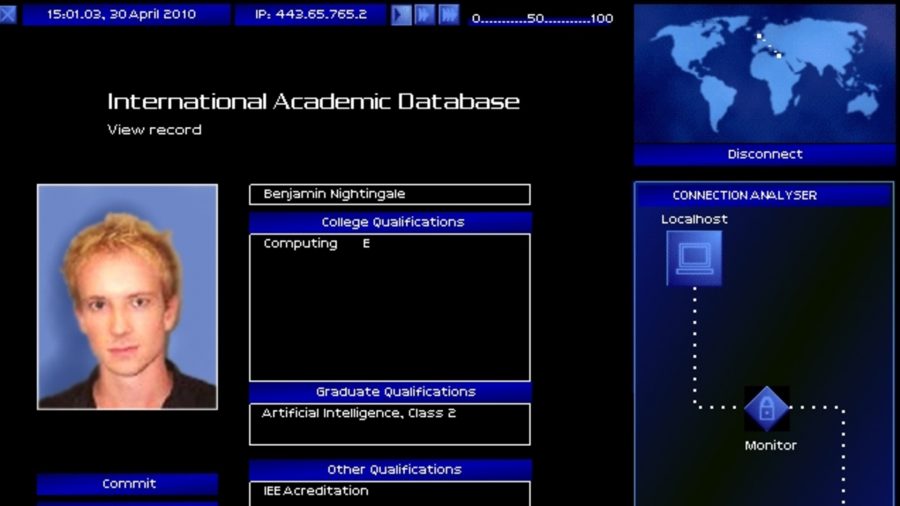 Originally released less than a month after 9/11, Uplink is a throwback to a simpler time, emulating the aesthetic of ‘90s hacker films in its presentation of code-cracking. Unlike in System Shock 2, hacking is not one option among many here; it’s the whole game, and as a result, your screen is an exact representation of the screen your player interacts with (a presentation that many other entries on this list have borrowed).

After receiving a message from a deceased hacker (a surprisingly common theme on this list), the player has the choice to target a villainous group who is using a virus in an attempt to destroy the Internet. Fascinatingly, though, you can choose to opt out of the main story entirely, focusing instead on completing freelance hacking gigs. 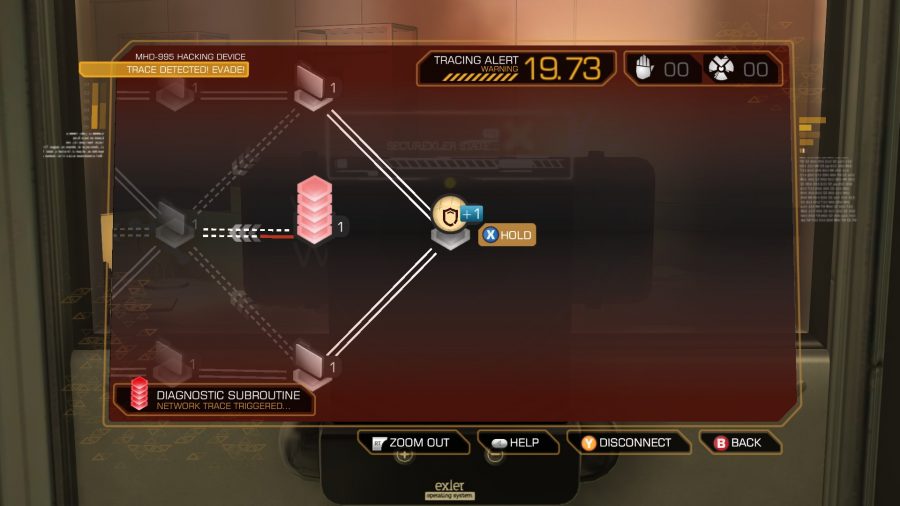 The Deus Ex games are the anti-Star Trek — every odd-numbered one is good. The original Deus Ex was acclaimed as a masterpiece, but its follow-up Invisible War was retrospectively regarded as a major misstep. But, Human Revolution, the series’ long-awaited third entry was hailed as a return to form.

As in System Shock 2, hacking is one skill that protagonist Adam Jensen can dump points into, allowing him to bypass fights and rummage around where he shouldn’t. The interface is similarly interesting, with players capturing nodes on a grid to build a path between two points. The system returned, mostly unchanged, in the 2016 sequel Mankind Divided. 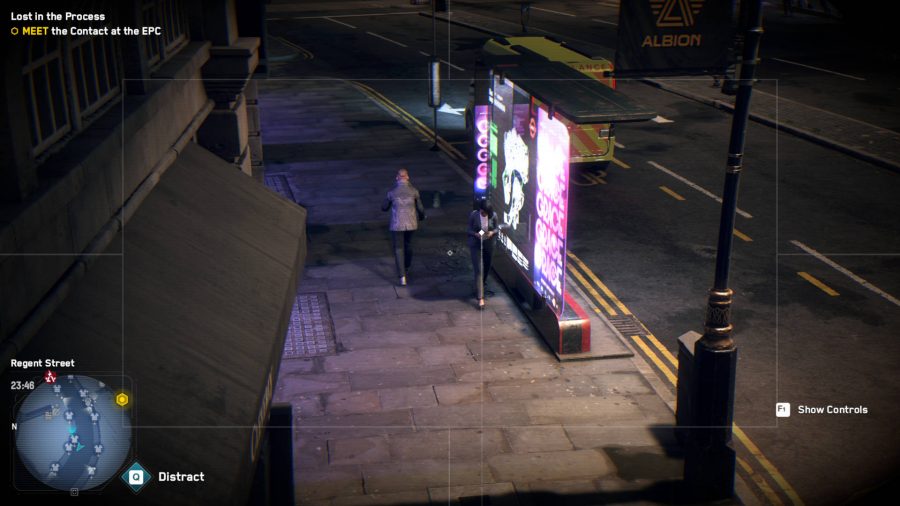 While 2014’s Watch Dogs stumbled out the gate with an extremely bland if grumpy protagonist, Watch Dogs 2 was a more lively and likeable effort. Watch Dogs Legion turns the dial up to eleven, showing a near-future London, and instead of having just one playable character, why not a whole city?

Fundamentally, it’s not massively different from Watch Dogs 2 in many ways, but giving you control of a potential city’s worth of rapscallions and scoundrels opens up new infiltration possibilities, no matter what the job is. Perhaps you need to nab some intel from a rooftop? Why not use a construction worker’s drone to fly up there. Perhaps you want to be an unassuming granny that just happens to be a highly skilled secret agent. No matter which ones are the Watch Dogs Legion best recruits, you’re bound to find some memorable Londoners to add to your roster, or lose if you enable Watch Dogs Legion’s permadeath!

You can also do the Lambeth Walk (oi!) with your mates in Watch Dogs Legion multiplayer – take on heists with some fellow cockneys and make off with some valuable Albion loot, before retiring to have a good old knees up at the local pub. 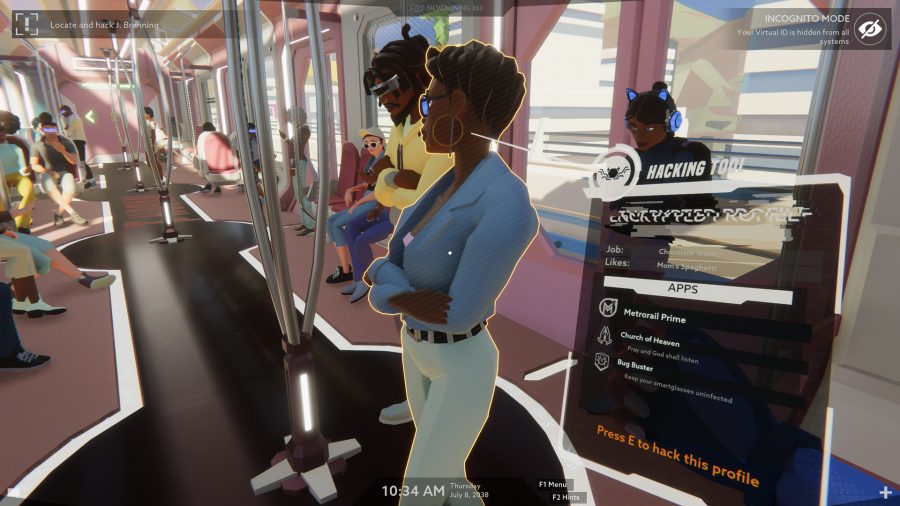 Operation Tango is all about teamwork; one person plays a computer genius remotely accessing all sorts of systems and networks, while the other is a field agent, trying to safely navigate hostile situations on the ground. You can’t see what your fellow agent is doing, so communication is paramount in order to make it out alive.

Through its asymmetric gameplay, Operation Tango perfectly captures the thrill of hacking into systems remotely and puzzling through menus, with the pressure and responsibility of your teammate’s fate on the line. If you can keep a cool head under pressure, you’ll feel like a hacking pro. 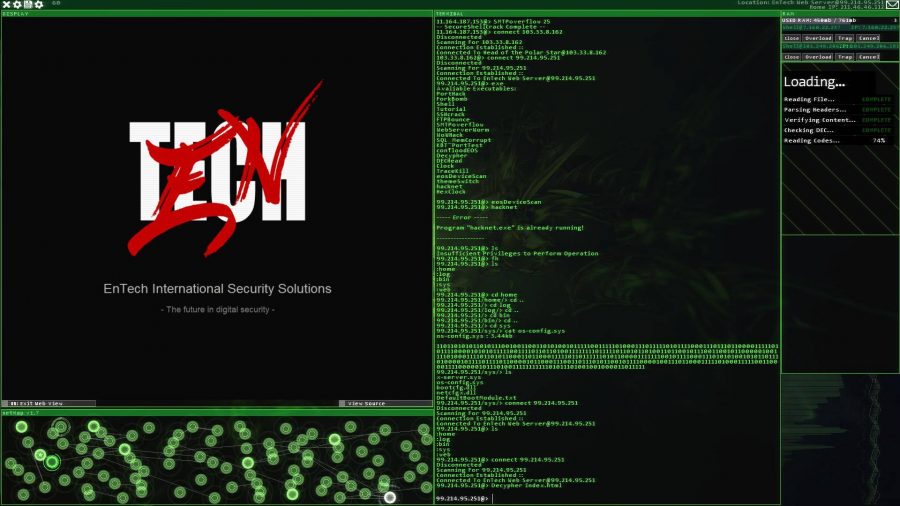 In Hacknet, you are a hacker with access to flexible code and a database filled with Easter eggs. After a dead hacker contacts you via automated message in a ghostly inciting incident, you set off on a range of hack-centric missions. As you play, Hacknet simulates real-world hacking, teaching you UNIX commands similar to the ones you would use to, say, empty someone’s bank account IRL. A 2017 expansion, Labyrinths, added intriguing ARG elements and new tools to play with. 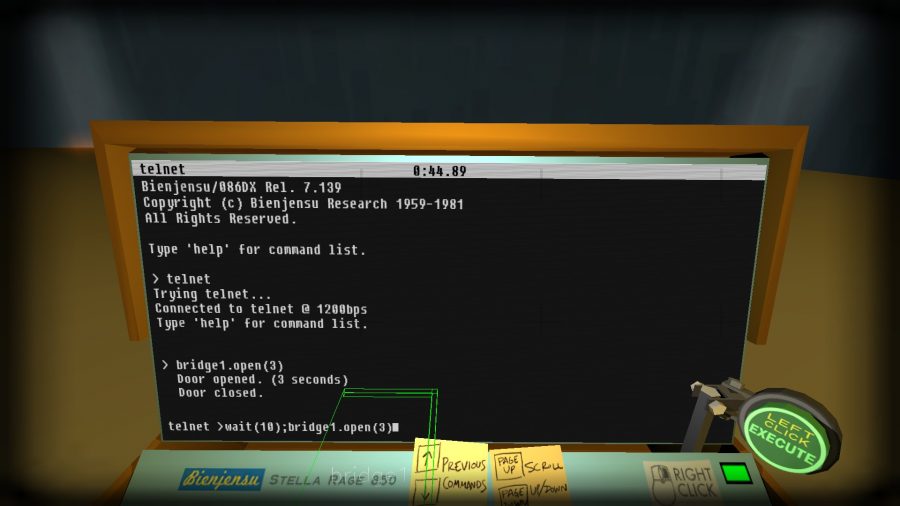 Billed as ’20th Century Cyberpunk,’ Blendo Games’ stylish first-person puzzler casts the player as a hacker thief pulling off Ocean’s 11-style heists with the help of a portable computer or ‘deck’. You’ll open doors, turn off lasers, control a mechanical quadruped — all with lines of code.

Most games abstract hacking to make it as quick and intuitive as possible. But, typing commands, loaded with numbers and odd punctuation, is not an intuitive act, and Quadrilateral Cowboy doesn’t try to make it so. Instead, with a gentle learning curve and a smart tutorial, Quadrilateral Cowboy teaches you the basics of code, and makes you feel like a badass for being a good student. 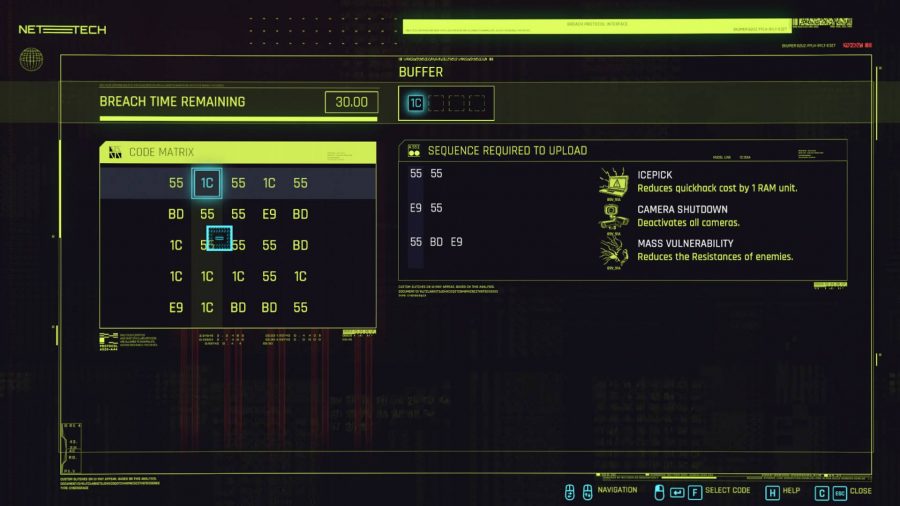 This recommendation for Cyberpunk 2077 does come with a major caveat: it’s seen its fair share of bugs, but several have been ironed out since its opening few months. That said, Night City is a massive playground of potential, with plenty of places to explore, jobs to complete in return for eddies, and a whole city’s worth of valuable things to hack.

Since this is set in a first-person cyberpunk world, there’s plenty of shenanigans to be had during combat. You can use Cyberpunk 2077’s quickhacking to ping any connected device or person on a network, then upload daemons to mess with them. Some may cause the affected enemy to drop their gun, while others may blind them for a short time. If you’re facing a particularly difficult opponent, you can inflict multiple daemons at once.

You can also of course forego the whole hacking thing and just blast enemies away instead, but you might as well take a look at the best FPS games on PC while you’re at it. 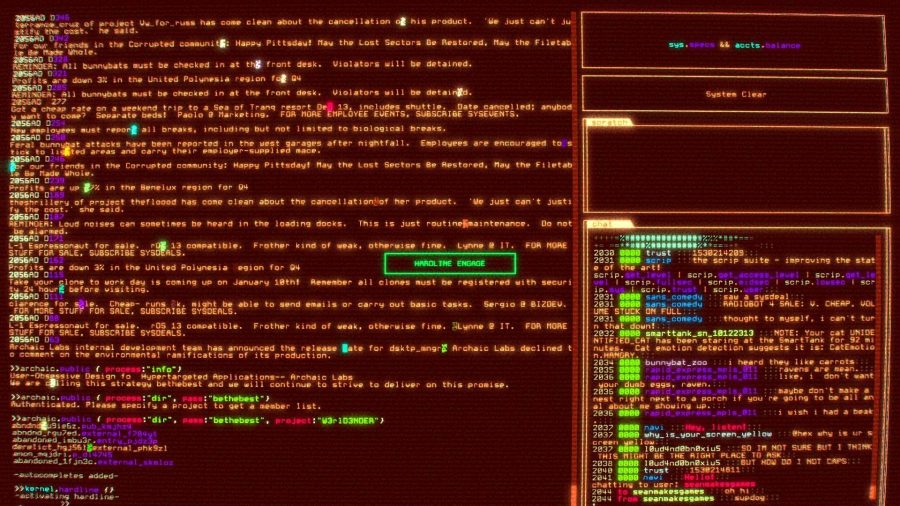 Hackmud is an MMO that casts the player as a hacker in a ‘90s-inspired interface. It’s got ample tutorials, but ultimately, to play this game well, you’re going to need to learn some Javascript. But, if you do, the world is your oyster.

It’s better together: Check out the best MMOs on PC in 2020

This crunchy 2016 hacking sim is a hive of scum and villainy that has drawn comparisons to EVE Online and Jurassic Park. Equal parts a hacker’s paradise and a social deception game like Mafia (the party game, not the open-world action series), Hackmud is the next step for master hackers who have cut their teeth on Quadrilateral Cowboy and our next entry. 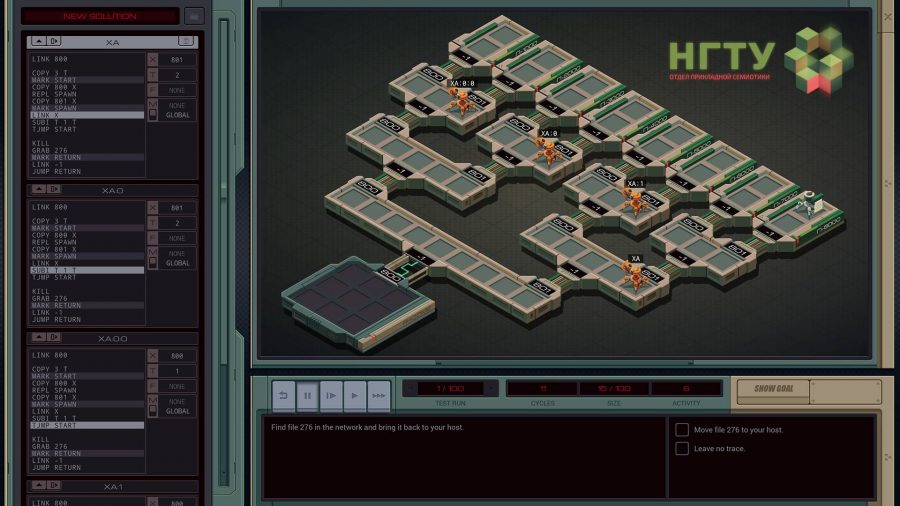 Exapunks, the 2018 puzzler from Zachtronics, casts you as a hacker in an alt-past 1997, even if some of its alternative history elements feel awfully at home in the present. The cyberpunk world is ravaged by a plague called the ‘phage’, and our hacker protagonist needs to shell out $700 a day for life-saving medication. A mysterious AI promises to keep the doses coming if the protagonist works for her.

You do that by learning to code — courtesy of Trash World News, a PDF zine that comes with the game — and inputting commands to send little digital robots called EXAs skittering around virtual grids. Like Quadrilateral Cowboy, Exapunks wants to teach you a new skill, not just feed you the power fantasy that you already have it. The programming language it teaches you is full-featured enough that you can even program your own games within the game. Exapunks demands more work from you than something like Watch Dogs Legion, but absolutely rewards your efforts. 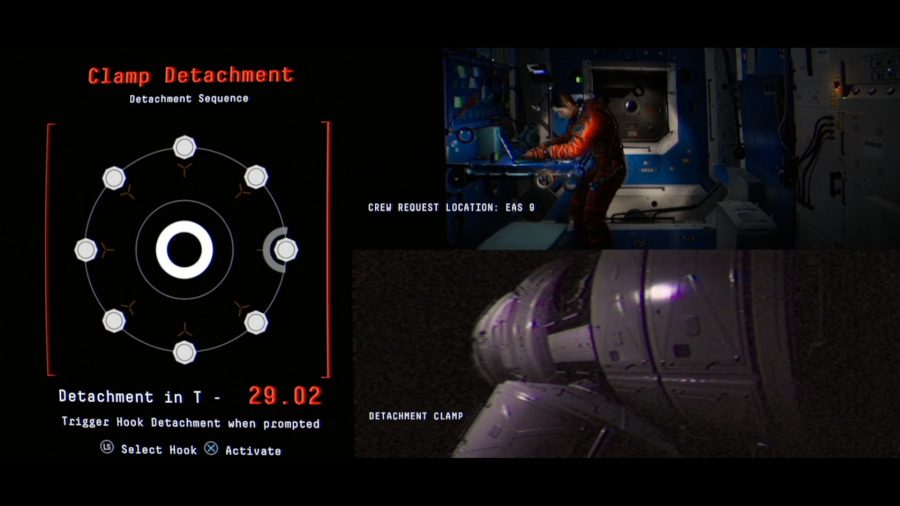 Observation is the rare game that casts the player as the computer. As SAM, a HAL-like space station OS, your goal is to help Emma, the lone (?) occupant of the station after a mysterious event leaves it powerless and stranded. SAM can swap between cameras, providing viewpoints around the station. Eventually, he gains mobility, too, taking control of a spherical camera and floating around the station in zero gravity.

Like No Code’s previous game, Stories Untold, Observation is intimately concerned with the ways the technology we use mediates the stories we can tell. It isn’t a hacking game, per se. But, it does provide the best approximation of what it would be like to be inside the machine. Assuming that machine completes complex processes by participating in WarioWare-like mini games, that is. 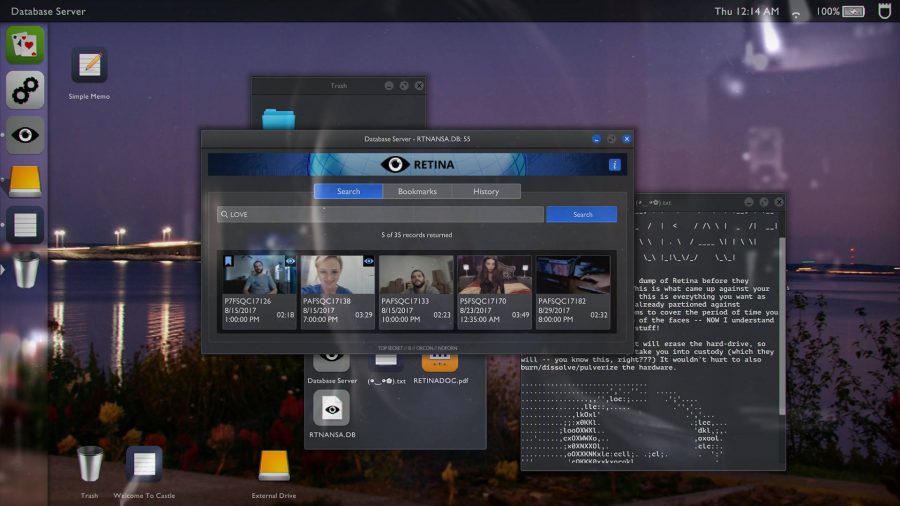 Most of the games on this list attempt to make players feel the prowess of the skillful hacker. Telling Lies, however, focuses on the voyeurism. Like Observation, Telling Lies’ protagonist isn’t strictly a hacker. But, as a former FBI agent with access to a trove of stolen, classified video clips, she sure feels like one. After an initial cut scene that shows our whistleblower plugging a filched USB into her computer, it’s your job to enter search terms that will yield the trove’s secrets. To say too much more would spoil the fun; for all the time you spend fastforwarding and searching terms, Telling Lies’ core mechanic is mystery.