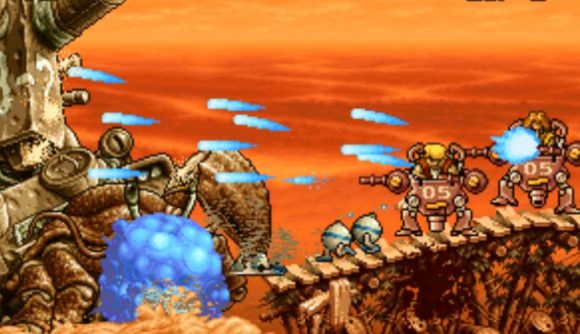 Arcade classics continue to roll out as part of SNK’s partnership with Amazon and Prime Gaming. We’ve already seen one bundle of free games arrive in September, but now eight more of SNK’s classics are available free through Prime Gaming.

You’ll want to dust off your fight stick for most of these, since they’re old games that saw their heyday back in the glory days of the mall arcade. At the top of the list is Metal Slug 3, the side-scrolling hardcore shoot ’em up that sent you across the beaches, through the sewers, and into deadly robot factories it save hostages and blow up bad guys. The Metal Slug series features some of the best sprite animation and environmental art in the 16-bit era, but don’t get too comfortable because they’re punishingly difficult – and Metal Slug 3 is no exception.

Shock Troopers is also included in this drop of SNK games, and it’s a 1997 Contra-style run-and-gun game with a diverse cast of characters and more of SNK’s challenging arcade action. There are cliffs to scale, motorcycle sequences, and plenty of explosions in this inventive arcade adventure.

The six other games in the bundle all feature online matchmaking through Prime Gaming, and that’s great because they’re classic SNK fighting games. Here’s what you’ll get:

If that’s not enough, check out all these great free games you can play on PC right now – videogames don’t have to be expensive to be fun. Head over to Prime Gaming to claim this batch of free games – you’ve got plenty of time though, as they’ll be available through March 31 of next year. You can sign up for a free trial of Amazon Prime if you’re not a subscriber, and you’ll be able to claim your games.