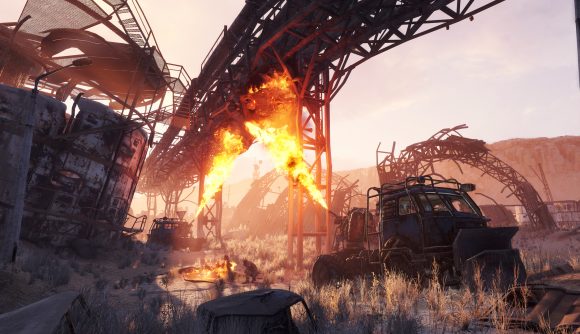 A new ‘enhanced edition’ of Metro Exodus is on the way to PC, and it’s going to be free to all existing owners of the post-apocalyptic FPS game. 4A Games says this new edition will take advantage of the latest in graphics hardware, adding additional support for ray tracing and implementing Nvidia’s DLSS 2.0.

It’s been two years since Metro Exodus first launched, originally as an Epic Games Store exclusive, and ray tracing has come a long way since then. 4A Games says this new edition of Metro Exodus requires a graphics card capable of ray tracing as a baseline system requirement, and that it’s enough of an overhaul of the original version of the game that it will require a separate installation. “[I]t is not a simple ‘patch’ to the base game,” 4A writes in a post to the Exodus Steam page. “[I]nstead it will be offered as an extra entitlement to all existing Metro Exodus PC players.”

While the post is on Steam, that offer will of course also be available free to players who own Exodus on the Epic Games Store or GOG. This new edition includes support for advanced ray traced reflections (watch for these while paddling around on the waters of the Volga) and support for DLSS 2.0 for players using Nvidia graphics cards. You’ll also see new features for ray-traced global illumination and emissive lighting, and the new pipeline 4A has built boosts “resolution, visual detail, and performance”.

DLSS 2.0 coming to Metro Exodus means players should see higher framerates – the tech takes a lower rendering resolution and upscales it to whatever your monitor is capable of displaying, intelligently interpreting the data from the base resolution to display crisp details, even at 4K.

If you haven’t gotten around to playing Metro Exodus, this new edition may be the perfect time to take the trip. In our Metro Exodus review, we called it “exquisite” and “one of the best post-apocalyptic games ever made,” both of which remain true statements two years later. In addition to the extremely pretty ray-traced lighting, Metro Exodus also contains some genuinely touching human moments, and it’s a worthy capstone to the story of Artyom that began with Metro 2033.

4A Games says the Metro Exodus Enhanced Edition will be available “later this spring.”