September 8, 2020 SmoothTrack is now available for both iOS and Android devices.

Microsoft Flight Simulator has a whole host of options to make it an amazingly immersive flying experience, but as fans of simulation games have long known, that’s just the start. After getting the software set up, there’s the whole process of acquiring expensive new hardware for ever more realistic simming. One cheaper option, however, is to get set up for head tracking, which you can now do with a single, inexpensive mobile app.

SmoothTrack is available for $9.99 as an iOS app (or $4.99 in beta on Google Play) that uses your device’s camera to track the position of your noggin, and sends that to your PC for TrackIR to use as controller input. Effectively that means that if you cast your gaze left, your cockpit view in Microsoft Flight Simulator will shift to the left. Look up, and your view shifts up. Just fire up the app, prop your phone on your desk, and you’ve got six-degrees-of-freedom head tracking.

Your phone or camera-equipped tablet is the only piece of hardware you’ll need to make it work, and once you’ve got it set up you’re good to go with any number of simulators, so long as they support TrackIR (so yes, it should work with Elite Dangerous).

Here’s a video showing it in action: 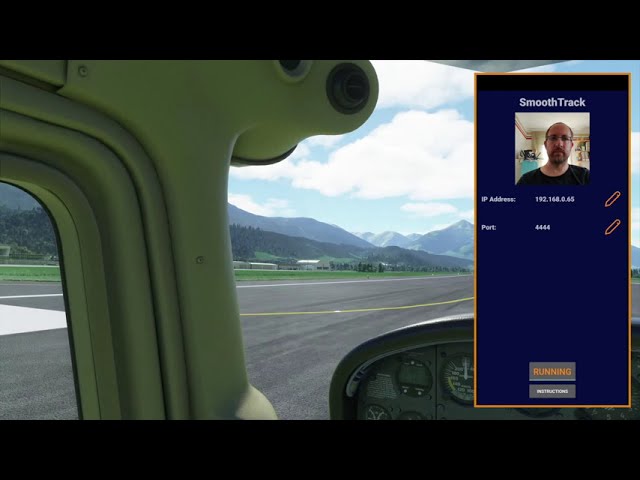 You’ll want to download an additional program to your PC – it’s a free piece of software called OpenTrack. Once you have that up and running, you can add ‘freetrack 2.0 Enhanced’ as a UDP over network input source. Then, point SmoothTrack toward your PC’s IP address, and you’ll be able to use it in Flight Simulator.

The app’s creator, John Goering, began by building the iOS version, but the Android version is now available in beta. Buying in during the beta costs $4.99, but when the app is updated to 1.0 tomorrow, that price will rise to match the iOS version at $9.99. If you buy the beta, you’ll be upgraded for free.

We were able to get the Android beta build up and running in Microsoft Flight Simulator in just a couple minutes – with OpenTrack running in the background and the IP address set correctly, Flight Simulator immediately recognised a TrackIR input and no fiddling with camera control bindings was required – looking left and right in the virtual cockpit was suddenly as simple as turning our heads. It’s all customisable though, so if you need to make adjustments to the speed or sensitivity, there’s plenty of options.

If you have no idea what this is all about, have a look at our Microsoft Flight Simulator review. Or, if you’ve already gotten airborne, consider a trip to the site where the iconic Windows XP ‘Bliss’ wallpaper was photographed, and pour one out in memory of DirectX 8.1.