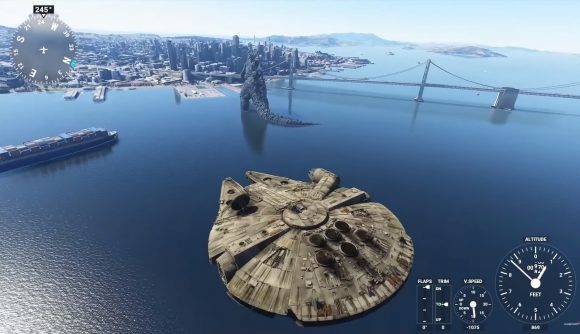 Like any true Star Wars fan, my favourite scene has always been the moment when Han Solo expertly maneuvers the falcon between Godzilla’s legs, pulls up, and then barrel rolls inches away from the scaly kaiju’s mouth. Absolute classic. Now, thanks to YouTuber Swiss001 and a handful of talented modders, that iconic (and definitely real) scene is no longer confined by the dull shackles of non-interactivity.

In this eight-minute video, Swiss001 test pilots a range of the strangest add-ons currently available for Microsoft Flight Simulator. As well as the Falcon, there’s also the Starship Enterprise, Doc Brown’s DeLorean, and a TIE Fighter. We’re counting down the parsecs (we know, measurement!) until the release of Star Wars: Squadrons, so these alternative aircraft add-ons look like the perfect alternative to TIE-d us over until then. Ahem.

Swiss001’s video also features a familiar laser-spewing lizard making its way out of the ocean, who you might recognise if you’ve been keeping up with our regular Flight Sim mod coverage. We can’t comment on whether Godzilla precautions are part of standard training for pilots, but surely it can’t hurt.

All these new aircraft join a host of other colourful additions to the game, including this chonking big Gundam. 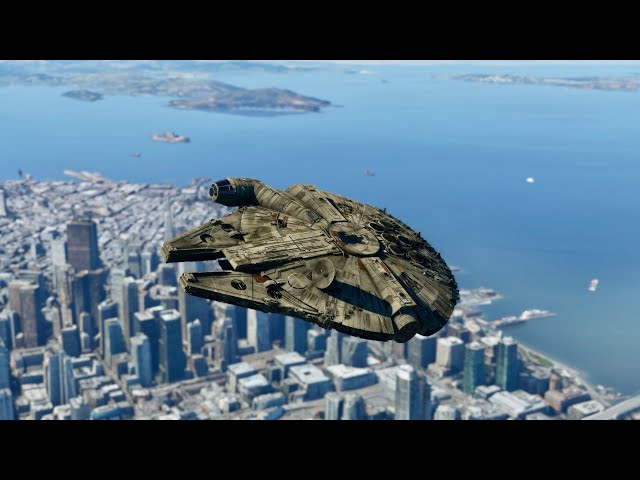 Our Microsoft Flight Simulator review said the game “represents the kind of striking, no holds barred leap forward in technology and scope that we should encourage, even if it makes a mockery of your shiny new (and very expensive) RTX 2080 Ti in the process.”