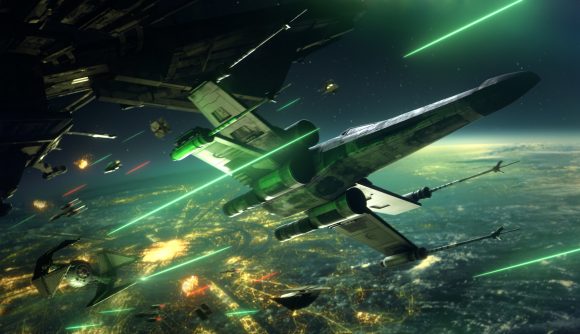 Star Wars Squadrons was officially unveiled today, along with its launch date. The space combat game, which features a heavy emphasis on 5v5 objective-based multiplayer battles, will be released October 2, and it’s coming to Steam, the Epic Games Store, and Origin.

EA Motive revealed the game today after leaks on the Xbox website last week gave away the name. The trailer kicks off with a TIE Interceptor in hot pursuit of a wounded X-Wing through an asteroid belt, and cuts between inspirational speeches by New Republic and Empire commanders before their assembled pilots. “Five pilots, one squadron,” they say, emphasizing Squadrons’ team-based structure.

You and your team will plan the skirmish in a briefing room before each match, and then fight it out in battles “across the galaxy,” EA says. The ultimate goal for both teams is to destroy the enemy flagship, and the trailer (below) shows us an Imperial Star Destroyer rising majestically out of a cloudbank.

Furthermore, as a pilot, you’ll be flying and seeing the action from a first person perspective, meaning Squadrons will be more of a throwback to the TIE Fighter and X-Wing days of yore than the chase-cam arcade battles featured in more recent Star Wars titles like Battlefront 2. In another nod to the classic TIE Fighter era, you’ll have to manage your power distribution between shields and engines.

Star Wars Squadrons also features a single-player campaign (written Walt Williams, who wrote Spec Ops: The Line, with Mitch Dyer and Joanna Berry, who has written for BioWare) and will be playable in VR, so if you’re old enough to remember playing TIE Fighter back in the day, maybe have a seat to calm down for a couple minutes.

EA says Squadrons features “rich cosmetic and gameplay customisation options” that you’ll be able to earn through gameplay – new weapons, engines, hulls, and shields will all be available as rewards for play, as will cosmetic options for your cockpits.

You can preorder Star Wars Squadrons starting today through Origin, the Epic Games Store, and Steam, where it’s listed for $39.99 USD / £34.99. Origin Premier members will have access to the game for as long as they maintain their subscriptions. Is it destined to become one of the best Star Wars games ever? We’ll find out this fall.